Bills' Cole Beasley calls out fans for booing him at home

The wide receiver posted on Twitter that he only gets booed at home games, and that some of those same people later ask for autographs and pictures. 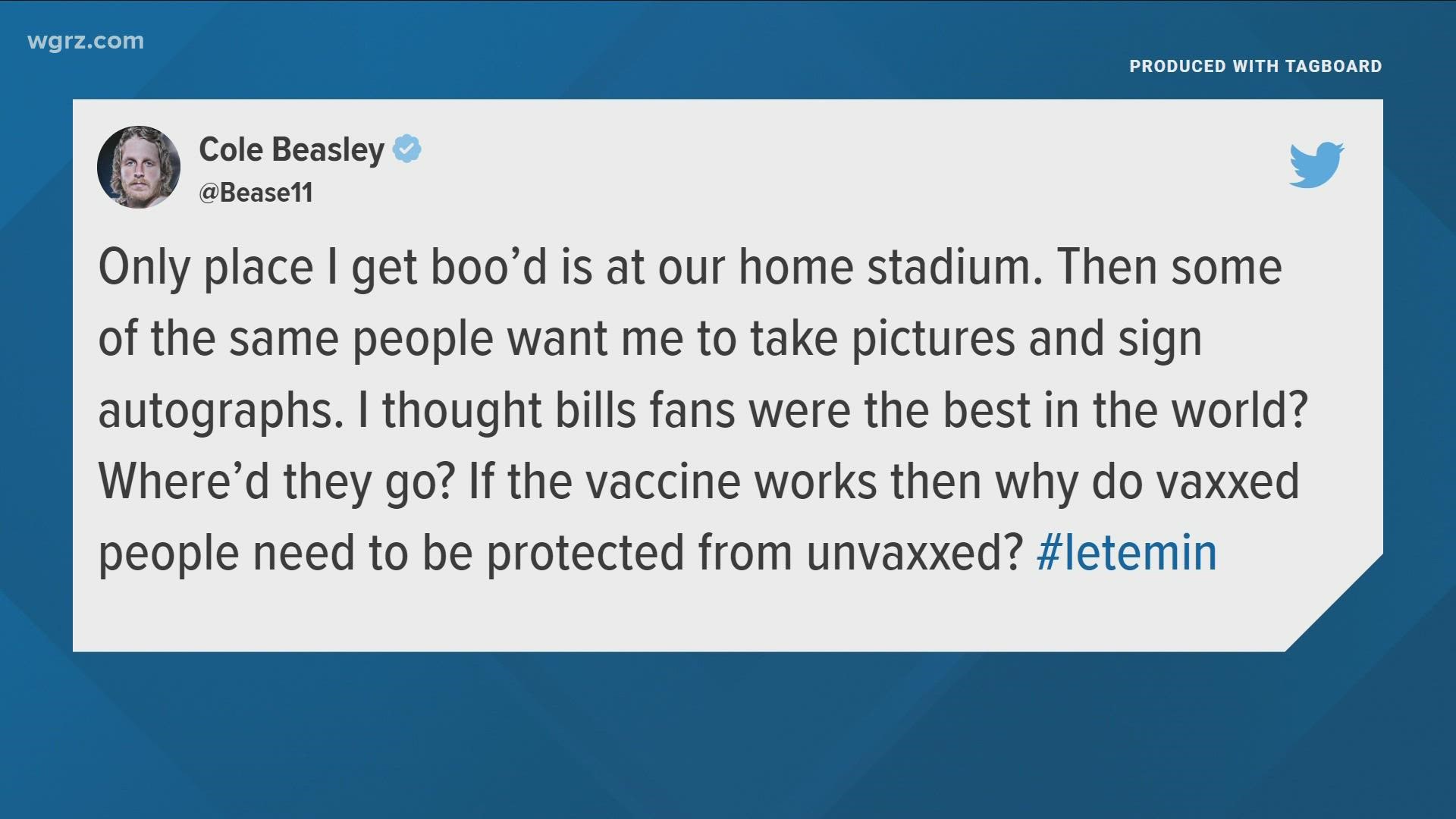 ORCHARD PARK, N.Y. — The Buffalo Bills' Cole Beasley is calling out fans who boo him at Highmark Stadium.

The wide receiver posted on Twitter that he only gets booed at home games, and that some of those same people later ask for autographs and pictures.  He also asks, "I thought bills fans were the best in the world?"

Only place I get boo’d is at our home stadium. Then some of the same people want me to take pictures and sign autographs. I thought bills fans were the best in the world? Where’d they go? If the vaccine works then why do vaxxed people need to be protected from unvaxxed? #letemin

Beasley has publicly stated his refusal to take the vaccine and has been outspoken about the NFL's rules for unvaccinated players.

"Some people may think that I'm being selfish and making this a 'me' thing, but it is all about the young players who don't have a voice and are reaching out to me every day because they're told if they don't get vaxxed, they'll be cut."

Beasley was among Bills players who were are a part of a five-day re-entry process to team facilities in late August because of close contact with a staff member who tested positive for COVID-19.

The Dallas Maverick's owner Mark Cuban has also been vocal about people getting the COVID-19 vaccine.

He replied to Beasley's tweets that sparked a twitter conversation between the two.

Bease, the problem isn't so much your choice as it is your logic. You know the rules that apply to your choice, and that is yours to make. But the examples you give as the basis for why you make your choice are questionable. https://t.co/IGJlJ8Mw1Y

Then just say that. When they say its 95% effective, that means some can get it and those that catch it can transmit it. NO ONE says it always stops covid. And FWIW, while you are right the risks aren't the same for everyone, no one knows their own risk till after they have it. https://t.co/JRaI9l5U5J

Yes Cole, they can get it from a vaccinated person. But there are hundreds of millions of vaccinated people they can't catch it from because those people got vaccinated and didn't catch covid. That Cole is the entire point. The more people that are vaccinated the lower the chance https://t.co/owNYznzmS4

The thing is Cole, when you protect your employees and customers, it's good for business. Plus, my healthcare costs have gone up due to covid. I now require vaccinations. When emps and customers don't agree, they go elsewhere. It is their choice. That is the way business works. https://t.co/Hce7lX49P9