What to know for tonight's Baylor vs. Gonzaga national championship game

Neither team has ever been crowned national champions. Here's when to watch tonight's game on CBS. 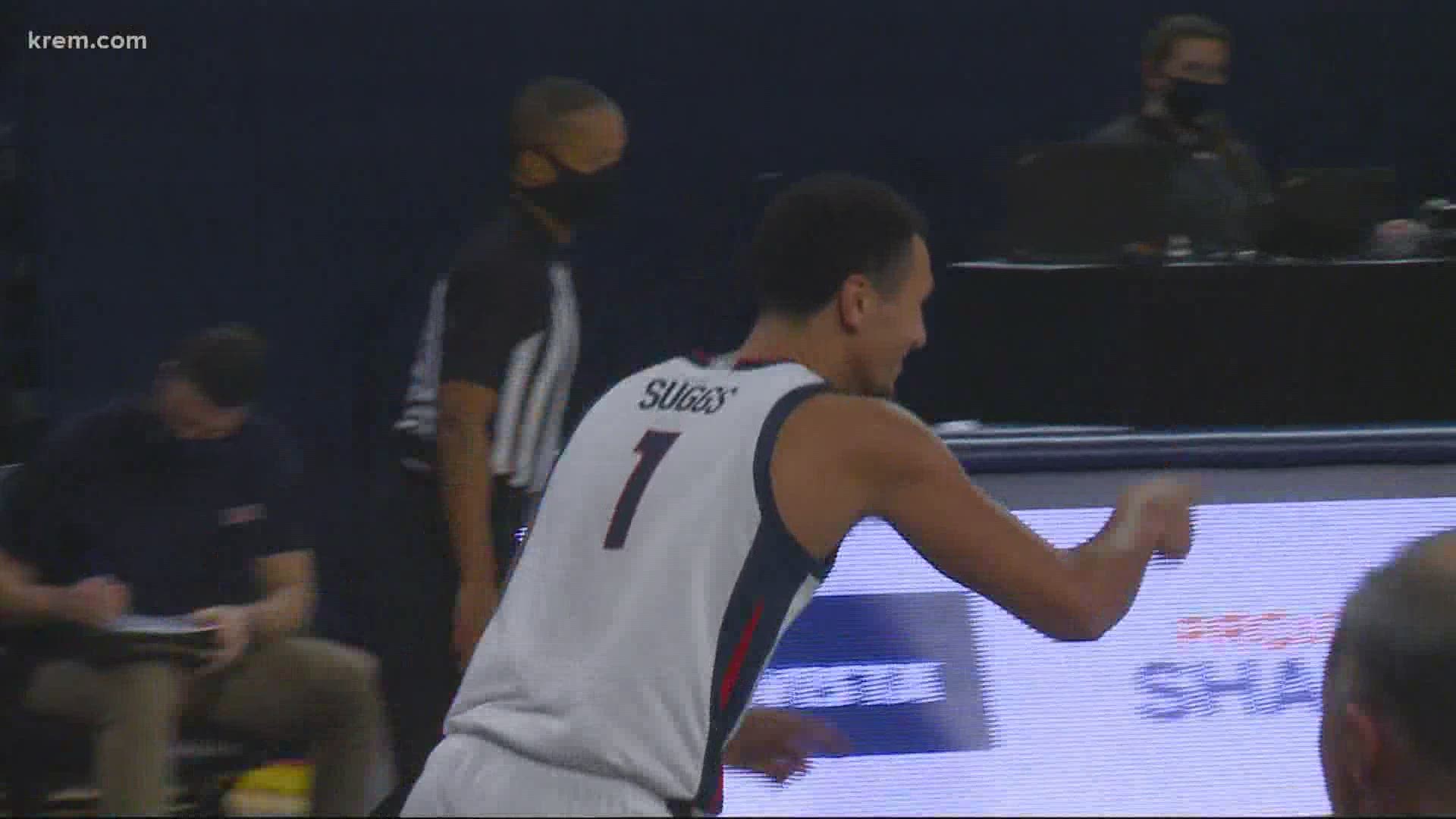 HOUSTON — It's about time for the biggest men's college basketball game of the year: Monday night, Baylor will play Gonzaga in the national championship of the NCAA Tournament.

Gonzaga is riding high following the most iconic shot in program history when Jalen Suggs hit a near half-court shot to give the Zags a 93-90 win in overtime in the Final Four against #11 UCLA. They are undefeated this season.

Gonzaga and Baylor were scheduled to play in the non-conference this schedule on Dec. 5. It was the most anticipated game to many in the non-conference slate as it was going to be a matchup between the top two teams in the country. It was canceled due to coronavirus cases on the Gonzaga men's basketball team.

Baylor head coach Scott Drew said in a press conference on Sunday that him and Gonzaga head coach Mark Few thought it would be cool if they ended up playing in the national championship after that game was canceled. Here we are.

Gonzaga and Baylor have played four times before. The Zags have won all four times. The last time the two teams met was in the second round of the 2019 NCAA Tournament. Gonzaga won 83-71. Brandon Clarke had 36 points, eight rebounds and five blocks.

Who is favored to win?

Gonzaga  is a 4.5 point favorite in the national championship.

What time is the NCAA Championship Game?

Gonzaga and Baylor will play on Monday, April 5 at 8:20 p.m. Central/Houston time. That game will be televised live on KHOU 11 and CBS stations around the country with coverage beginning at 8 p.m.

(AP) — The only reason Baylor's backcourt can't be considered a true brotherhood is the blood coursing through their veins.

Whether they were declaring together for the NBA draft or withdrawing from it, transferring from other schools or helping newcomers acclimate to coach Scott Drew's program, Jared Butler, MaCio Teague and Davion Mitchell have done just about everything together over the past couple of years.

That includes leading the Bears to their first national championship game since the 1940s.

But that much-anticipated showdown with unbeaten Gonzaga on Monday night, the only team that kept the Bears from ascending to No. 1 all season, probably wouldn't have been happened had those three not returned to Baylor this season.

Teague was the first to declare for the NBA draft last spring, shortly after the Big 12 and NCAA tournaments were called off due to the coronavirus outbreak. Butler dropped his name in the hat after an All-American season a couple weeks later, and Mitchell might have done the same if scouts cared as much about defense as they do offense.

All three came back, though. Each had their own reasons, but one in particular tied them together: The trio knew that they would have a chance to win the program's first national championship.

"I don't think the COVID ending was, like, a big reason why everybody came back," Butler said, "but I think we all explored our options equally and we wanted to see where we were at in our basketball career. And we just made the decision to come back, and we felt like, each one of us felt like coming back was the best option."

It certainly was the best situation for Baylor.

Along with Mark Vital, who decided around the same time to return for his fifth season, the Bears wound up bringing back just about their entire lineup from a team that spent time at No. 1 last season. And if not for a the pandemic putting a stop to everything, the Bears could have been chasing their Final Four dreams 12 months ago.

"I remember when it got canceled," Butler said, "it was like a tornado hitting our town in Waco, Texas, and just destroying everything. It was like, 'What?' It was so crazy. We just couldn't understand it. We couldn't fathom it."

It's still hard to fathom, especially when the Bears looked into the stands on Saturday night. Mixed among the thousands of cardboard cutouts in the lower section of Lucas Oil Stadium, and behind the masks required for fans to attend, were three members of last year's team cheering them on against Houston in the Final Four.

Devonte Bandoo and Freddie Gillespie had graduated, and Tristan Clark had retired from basketball due to injuries, the pandemic having short-changed all of them of a once-in-a-lifetime March Madness experience.

"We did talk to our team before we went out and said that Freddie and Devonte and Tristan were all in the stands and how much they wish they had this opportunity but they're here to cheer us on," Drew said Saturday night, after the Bears had cruised to a 78-59 victory over Houston. "And moments like that make you reflect and think you feel so bad for the guys that didn't have that opportunity and never will, but at the same time you feel so blessed and fortunate these guys are this year."

Teague, who began his career at UNC-Asheville before becoming one of the nation's best 3-point shooters with the Bears, was the first player to declare for the draft and the first to opt out. Butler, who had been projected as a mid-second round pick, decided just days before the pushed-back August deadline to return to school.

Except for Drew, perhaps, nobody was happier to hear it than Mitchell, the third of the Three Musketeers. The transfer from Auburn was just starting to flourish, and now would have his buddies to help him go to the next level.

"If you let Davion tell it," Teague said with a smile, "he's going to say he's the reason I came to Baylor. But on a serious note, he did text me and say that if I came here, he felt we could make it to a Final Four. And we've done that."

That was three years ago. Teague and Mitchell both sat out redshirt seasons while the Bears were starting to build toward what they would eventually become, and when they became eligible, they quickly ascended to No. 1 in the nation.

Now, more than a year after that point — after a pandemic curtailed the end of last season, toying with the NBA draft, and coming back to take Baylor on a ride unlike any other — they have a chance to finish the season on top.