The connection between Wes Laurel and Kat Kelley was unlikely, but it's helping Kat heal and allowing her feel closer to her late younger brother. 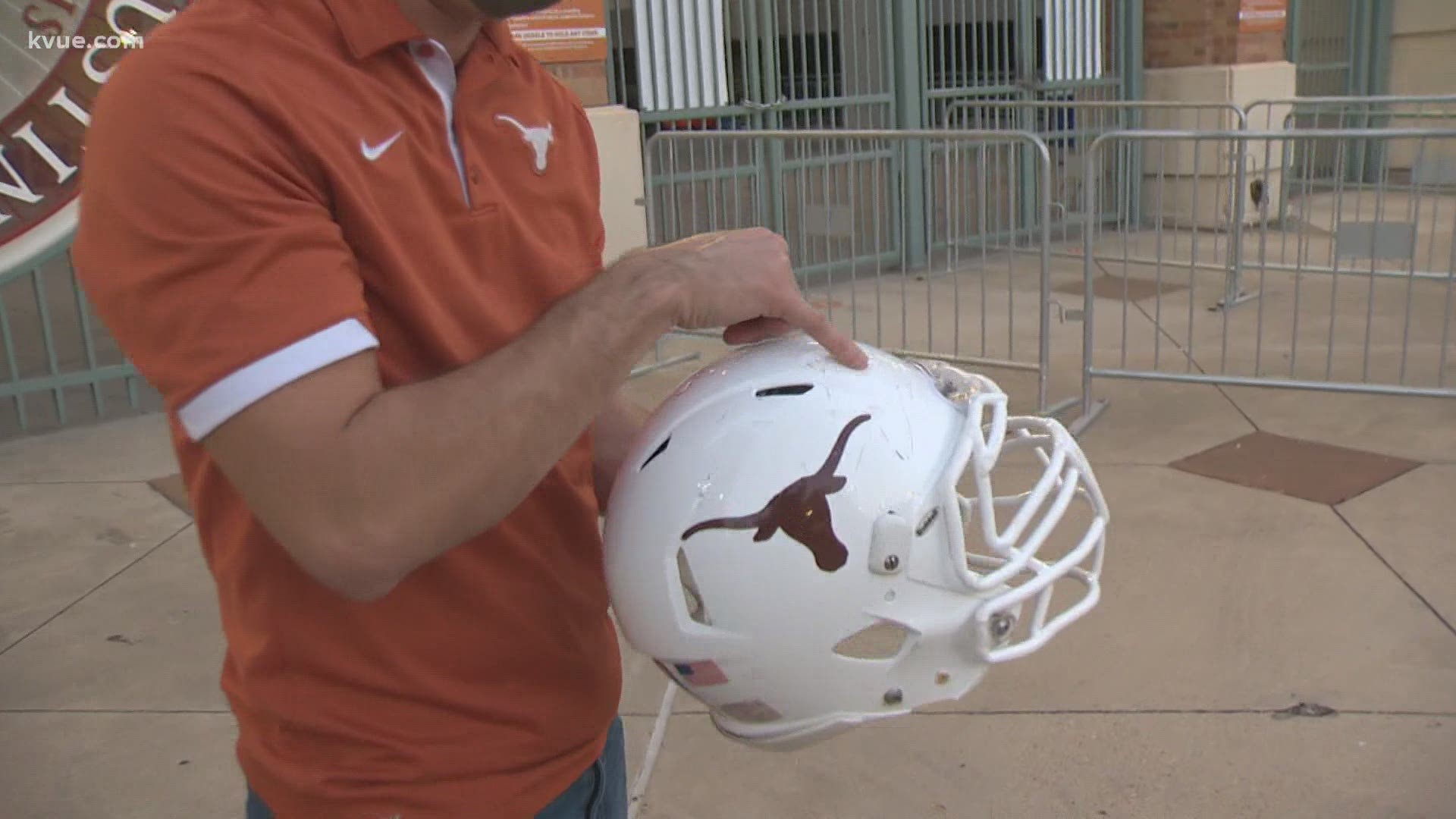 AUSTIN, Texas — On the campus of the University of Texas, Longhorns LTD has been connecting fans with football for years.

Wes Laurel is one of those fans, frequently stopping by the official Texas team store after football games.

“My dad started bringing me when I was 7 or 8 years old. We just came to games every year,” Laurel said.

Laurel is a longtime Longhorns supporter, and he's long dreamed of getting a piece of game-used equipment.

“It was the helmet. That iconic Texas helmet was just something that I really wanted to have,” Laurel said.

Three seasons ago, Laurel got his wish — $150 for some Horns headwear.

“(It was) probably my prized Longhorn possession," Laurel told KVUE. "It was the item that I really loved. It was the helmet.”

This helmet has been proudly displayed in Laurel's home ever since. It was his connection to the team he roots for and the school he loves.

But a few weeks ago, Laurel saw his prized possession in a picture.

It was a picture that he broke down in great detail.

“The facemask. It had an extra bar on the bottom,” Laurel said.

The picture would ultimately connect him to the only family that could love the helmet more than he did.

“Our family has been Longhorn football fans for forever," Kat Kelley said. "We've had season tickets to the games since 1970 and the whole family sits together.”

Kelley is a fifth generation Longhorn and her younger brother is Paden Kelley, who played on the Texas offensive line in 2010 and 2011.

“He was like 6'7" and over 300 (pounds) when he was playing and had this huge personality. (He) was always in brightly colored clothes and was the loudest person in the room,” Kelley said.

“The facemask was very unique," Laurel said. "I saw his number and the number on the helmet. It matched up. I knew right then I had to find the family to see if they wanted it.”

“I didn’t realize that a piece of his uniform would be in a gift shop,” Kat Kelley said.

“I initially asked the equipment manager, 'Well does his family have another helmet, or is this like a practice helmet?' And it turns out this was his only helmet here at UT,” Laurel added.

So with the help of Athletics Director Chris del Conte and a wave of Texas fans on social media, Laurel was put in contact with Kat Kelley.

Several seasons ago, I purchased my dream piece of Texas Football memorabilia... a game used helmet from DKR. It’s my prized Longhorn possession. However, I am 99 percent sure I have the helmet of Paden Kelley. PK played for Texas in 10-11 and recently passed away from cancer....

Thank you Texas Twitter. Because of all of you, I was able to give Paden Kelley’s helmet back to his family tonight outside of DKR. This is a moment I will never forget. I love being a Texas Longhorn. Hook’em. 🤘 pic.twitter.com/JwekWSK34I

“One of my big things right now is I just want to like talk about him and I want to share funny memories,” Kat Kelley said.

It's a memory that's scarred by tragedy.

“He was back here for Thanksgiving in 2018 and was telling me that he had found a lump, and a couple weeks later he ended up in the hospital up in Colorado with a severe blood clot and that’s when they found he had testicular cancer. He finished chemo on March 15, he passed away on March 18 — an accidental overdose on his pain medication from his cancer treatment,” Kat Kelley said.

“When somebody first passes away there’s this huge wave of texts and cards and flowers," Kat Kelley said. "Everybody’s really attentive and caring, and it’s not that the caring goes away, but it’s been a year and a half. Of course it’s not on everyone’s mind anymore. But it’s on our mind all day, every day.”

It's why the helmet homecoming meant so much.

“Coming to Texas was a lifelong dream of his. Getting here took a lot of hard work and effort,” Laurel said.

For Laurel, it was a piece of Texas equipment.

“That is a culmination of his efforts is that helmet,” Laurel said.

For the Kelley family, it was a piece of Paden.

“The fact that he wanted it to come back to my family is just really special,” Kat Kelley said.