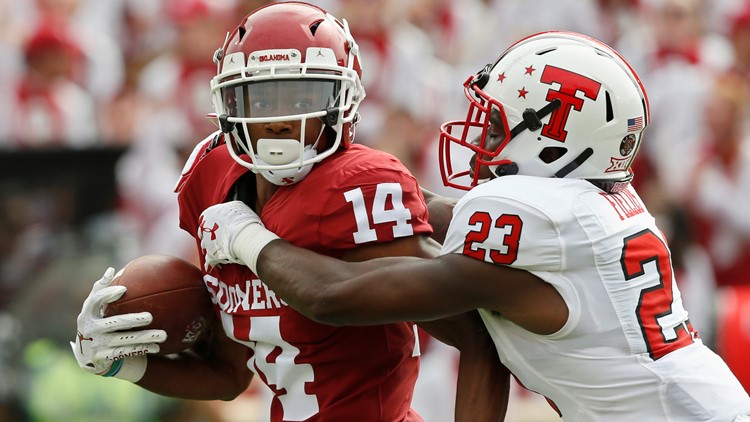 Hurts throws No. 6 Oklahoma past Texas Tech with ease, 55-16

NORMAN, Okla. (AP) - Jalen Hurts passed for 413 yards and three touchdowns, and No. 6 Oklahoma rolled past Texas Tech 55-16 on Saturday.

Hurts also ran for 70 yards and another score for the Sooners (4-0, 1-0 Big 12). His 483 yards of total offense ranks eighth in Oklahoma history. It was the first 400-yard passing game for the senior transfer from Alabama.

The Sooners, who entered the game leading the nation in total offense, gained 642 yards. They have totaled at least 600 yards in each game this season.

Jett Duffey passed for 120 yards and SaRodorick Thompson ran for 96 yards for Texas Tech (2-2, 0-1). Duffey got most of the action at quarterback in place of Alan Bowman, who sat out with a shoulder injury.

Hurts passed for 306 yards and two touchdowns and ran eight times for 60 yards and two more scores in the first half to help Oklahoma take a 34-10 lead.

Texas Tech: The Red Raiders were outmanned, and Oklahoma's dominance was so thorough that Bowman likely would have made little difference.

Oklahoma: The Sooners were their usual selves on offense, and Hurts continued to improve on his touch passes and deep throws. The defense took another step forward by holding the Red Raiders to 314 yards, including 122 yards passing. Oklahoma has held its past three opponents under 20 points.

The Sooners did what they could to impress voters, but it's hard to say what they will do. Oklahoma has dropped two spots since the preseason despite going without a loss.

Oklahoma plays at Kansas on Saturday.