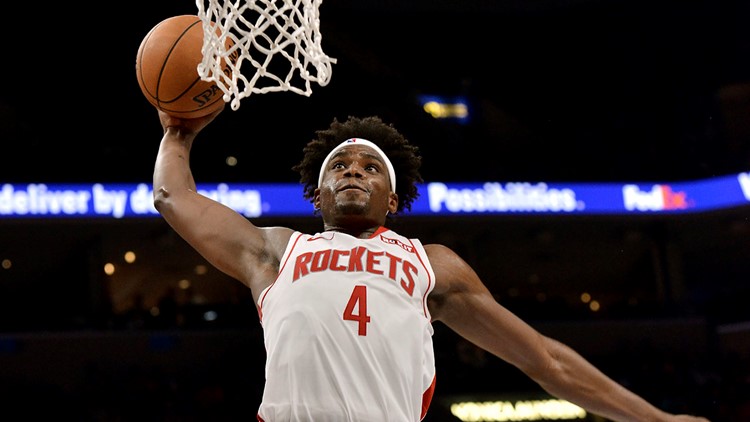 MEMPHIS, Tenn — James Harden scored 44 points, and the Houston Rockets recovered from a poor performance a night earlier at Miami for a 107-100 victory over the Memphis Grizzlies on Monday night.

Harden carried the load for the Rockets, who shot 38% from the field and were without Russell Westbrook, who took the night off for rest. The former MVP finished 12 of 28 from the field, including 7 of 16 from 3-point range. He added 10 rebounds and six assists.

The game got testy with about two minutes left when Grizzlies forward Jae Crowder appeared to take a shot to the groin while guarding Harden. After the foul was called on Crowder, Harden and the Grizzlies exchanged words, leading to Crowder's ejection. Harden was called for a flagrant-1 foul after a review by officials.

Memphis got within 102-95 with 1:54 left, but Harden's 3-pointer on the next possession put the game out of reach.

The first half was much better for the Rockets than Sunday night at Miami, where they trailed by as many as 41 to the Heat before losing 129-100. Houston was competitive against Memphis and a late burst in the half gave the Rockets a 62-60 lead at intermission.

Harden had 25 points by halftime. Morant led Memphis at the break with 12.

There were 15 ties and seven lead changes, and the game was still close past the midway point of the third before Houston used an 11-0 run to build a cushion.

Rockets: Closed out a four-game trip at 2-2. .... Have reached at least 60 points in the first half in four of eight games this season. ... Harden has 40-plus points in four straight games against the Grizzlies. ... Coach Mike D'Antoni challenged a foul call against Ben McLemore in the fourth quarter, but officials upheld the call after review.

Grizzlies: F Jaren Jackson Jr. (right knee soreness) and G Grayson Allen (left ankle) sat out the game. Both left Saturday's game against Phoenix in the third quarter. ... Memphis trailed at halftime for the second time this season. ... Were called for five technical fouls in the game. ... Were outscored 22-16 in the third. Memphis has not won a third quarter this season.