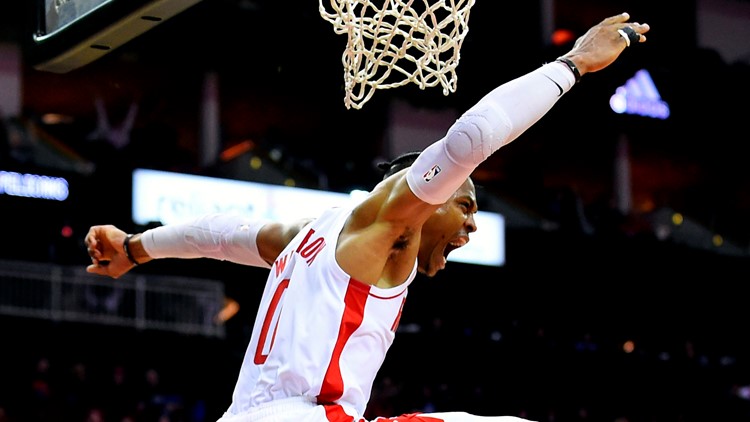 Photo by: AP
Houston Rockets guard Russell Westbrook reacts after his dunk during the second half of an NBA basketball game against the New Orleans Pelicans, Saturday, Oct. 26, 2019, in Houston. (AP Photo/Eric Christian Smith)

HOUSTON (AP) - James Harden scored 29 points and Russell Westbrook added his second straight triple-double with 28 points, 13 assists and 10 rebounds to lead the Houston Rockets to a 126-123 win over the New Orleans Pelicans on Saturday night.

Houston worked through occasional chemistry issues, frequently turning the ball over on errant passes. Westbrook and Harden combined for 12 turnovers, with Harden leading the game with eight. Harden was 2 of 18 from the 3-point line after going 1 for 8 in the opener. He was 8-for-29 from the field, but was 11 of 12 from the free throw line.

The Rockets bounced back after a 117-111 season-opening loss to Milwaukee on Thursday night.

The Pelicans were without point guard Jrue Holiday, who is day-to-day with a left knee sprain. Hart started in Holiday's place, scoring 23 points in 34 minutes. The Pelicans are already without top draft pick Zion Williamson, who is expected to miss the first six to eight weeks of the season after undergoing arthroscopic surgery to repair the lateral meniscus in his right knee.

For the last play of the third quarter, Westbrook found Austin Rivers for a corner 3 to cut New Orleans' lead to 100-97 entering the fourth quarter.

The Rockets opened up the final quarter on an 8-0 run, capped off by a thunderous two-handed dunk by Westbrook in transition to put Houston up 105-100.

The Rockets led 29-24 at the end of the first quarter, but the Pelicans had a better second quarter and entered halftime tied at 61.

In the final play of the first half, Harden was unable to cleanly get a 3 off at the buzzer in a heavily defended shot attempt. After the horn sounded, Harden slammed the ball off the court in frustration, only for it to come back hit him in the mouth.

Pelicans: Hart received a technical foul shortly after hitting a 3-pointer midway through the third quarter, possibly for taunting but it was unclear. ... Jahlil Okafor fouled out of the game early in the fourth quarter after playing less than 12 minutes in the game.

There was a pre-game demonstration outside of the main entrance of the Toyota Center by several dozen people holding signs and wearing shirts in support of anti-government protesters in Hong Kong.

Some of the loudest cheers from the relatively lightly attended Toyota Center crowd came when the Rockets posted score updates and video highlights on the videoboard from the Houston Astros' World Series Game 4, happening simultaneously in Washington. The Rockets PA announcer even accidentally called JJ Redick "Josh Reddick" on one 3-pointer to the crowd before correcting himself. Reddick is an Astros outfielder.