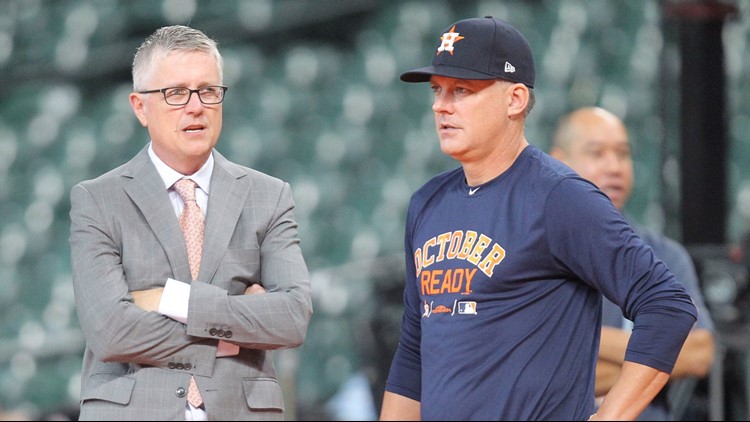 The offseason will provide a glimpse into what direction fans can expect the Astros to take over the next five years. Houston, we may or may not have a problem.
Author: Jeremy Booth (Contributor)
Published: 11:45 AM CDT November 2, 2018
Updated: 3:51 PM CDT November 2, 2018

The Houston Astros had a pretty good year with a franchise high in wins and another division championship. Their run took them back to the ALCS where they ran into arguably the only team better than them, the eventual World Series Champion Red Sox. The Astros were a better team on paper both in talent and in experience; but they had injuries in key positions at key times they never fully recovered from. They were eliminated, and it's time to turn the page.

As we look to 2019, there are questions that were not there this time last year.

The biggest strength of the 2018 Astros now becomes a big question mark as Dallas Keuchel, Charlie Morton, and Tony Sipp (yes, Tony Sipp) are free agents. Lance McCullers has arm issues and concerns that aren’t yet fully known, but its safe to say his 2019 workload projection is unknown. He breaks down every year as a starter, and now it’s potentially serious.

Offensively, they stand to lose a player in Marwin Gonzalez; someone who could be the team’s most valuable player over the last two years. Behind the plate, both catchers on the postseason roster will become free agents: Martin Maldonado is at the end of his contract and Brian McCann had a $15 million option which wasn’t picked up. Evan Gattis is unsigned for 2019.

That’s a lot for a team in the middle of a window that can have them competing for and winning multiple World Series titles, if they handle it correctly. Each case is different, but each case is one that has impact.

Starting with Keuchel, his presence has been lost in all the extreme stuff of Justin Verlander, Gerrit Cole, and Morton. However, this is a bonafide third starter with plus control and command who will give a club 175 innings a year of under four runs a night and a WHIP of 1.250.

Minute Maid is an extreme hitter’s park and a club like the Mariners, Dodgers, or Angels will pay him and understand their park will help him. His metrics are good and while reliant on execution, he’s in the middle of his prime and will command a significant upgrade from $13.1 million in 2018. My guess is 4 years and $80 million or 5 years and $90 million; but either way, it's somewhere else besides Houston.

Morton is another case entirely as he also has earned a raise from $7 million in 2018, but he’s said he doesn’t want to play anywhere else but in Houston. I love the sentiment, but anytime a player may say, “I don’t want to play at all unless…” that scares me.

Factor in McCullers’ uncertainty, along with both Cole and Verlander becoming free agents after 2019 (George Springer and Josh Reddick in 2021, while we’re at it), and the rotation that was the best in baseball has a chance very quickly to be 0-5 in returning starters.

The organization must look from within to replace the impact unless they want to pay up or downgrade, and only Forrest Whitley and Corbin Martin seem poised to see Minute Maid at some point in 2019. We will soon find out how well this club has drafted since the departure of Bobby Heck and David Post.

Gonzalez is an issue. Let’s be real about this right now. He’s played on a little over $5 million salary and bailed this club out more times then the skipper bailed out the SS Minnow. The man brings five gloves to the park every day; and has been an answer to every question asked.

He’s a safe bet to hit anywhere from 2-6 in the lineup when you need him to; and provide good at-bats with a .270, 15 home runs, and 70 RBI average per year. Add in the versatility and the fact that he’ll be playing his age-30 season, $5 million doesn’t even start the conversation. He was Jeff Luhnow’s first acquisition. Still, it’s going to take another aggressive stance to keep him here.

Looking behind the plate, we’re starting over. J.T. Realmuto is available, but the price will be higher now for Houston than it would have been eight months ago. Outfielder Kyle Tucker has questions following him now, and the Marlins will start with Whitley and work backwards. Assuming Luhnow doesn’t want to do that; then he faces the task of finding two pieces behind the plate or turning over the primary backup spot to Max Stassi and, potentially, Garrett Stubbs. Wilson Ramos will be an option, but he will need a similar compliment to Martin Maldonado; and to sign Ramos, you may as well sign your own guy if he wants to stay here.

The moves the Astros make now will not only impact the team in 2019, but the club in 2020 and beyond. The players left for them selected by their predecessors are ready to see what the next step is.

Re-sign them, and the window stays open. If enough impact is in the system to help fill what departs and spell an aging Yuli Gurriel and the younger core of Jose Altuve and Alex Bregman, then all is well.

Otherwise, this offseason will provide a glimpse into what direction we can expect over the next five years.

Houston, we may or may not have a problem.

Former professional scout Jeremy Booth is KHOU 11's baseball analyst. The opinions expressed in the above article are his own.