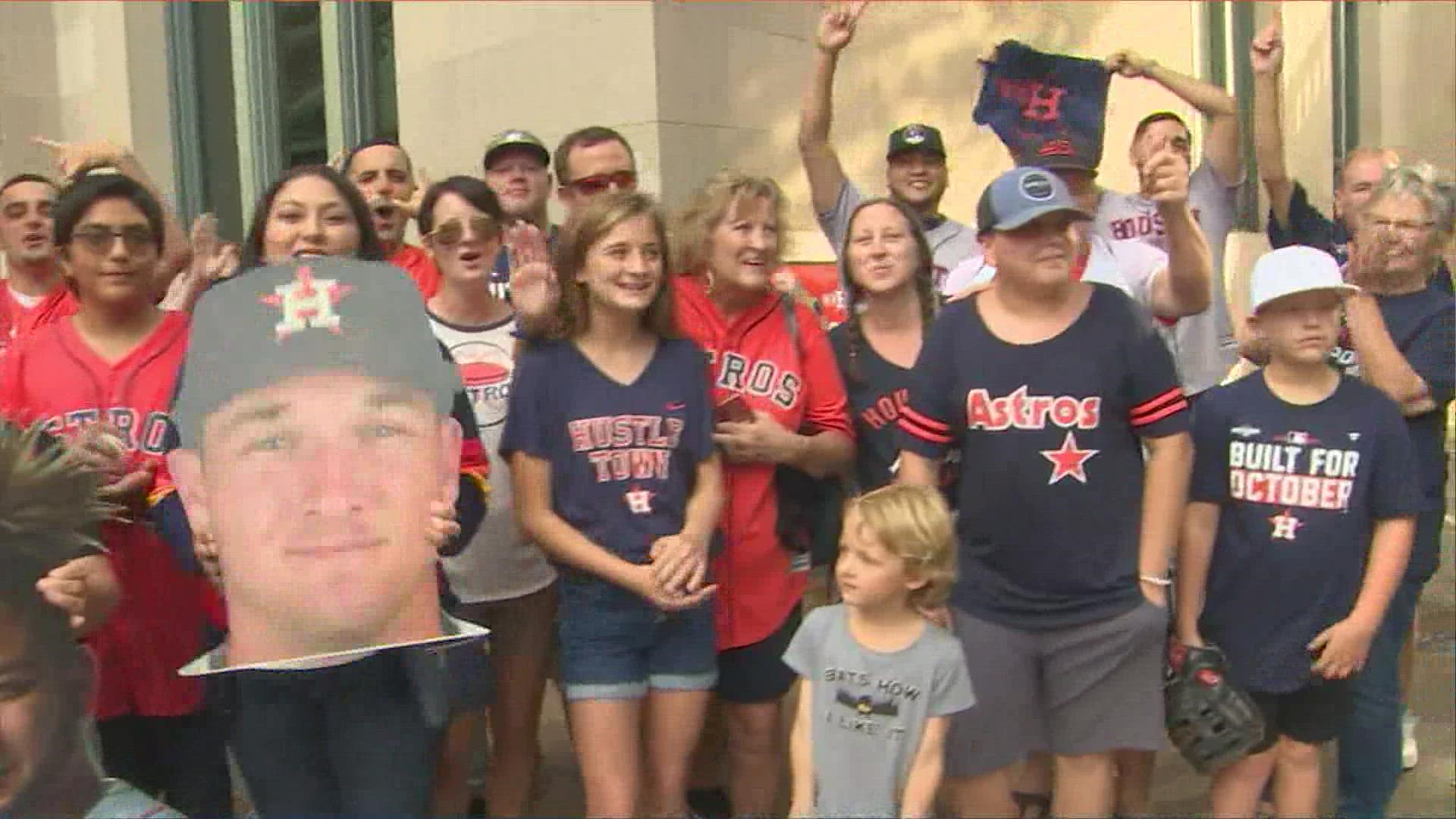 HOUSTON — Carlos Correa hit a tiebreaking home run in the seventh inning that helped the Houston Astros beat the Boston Red Sox 5-4 in Game 1 of the AL Championship Series.

Correa's solo shot off Hansel Robles came with two outs and gave the Astros a 4-3 lead.

Jose Altuve homered and drove in three runs for the Astros.

Kiké Hernández hit two home runs, a double and a single for Boston. His solo drive in the ninth pulled the Red Sox within a run.

During the ALCS, you can follow Jason Bristol, Matt Musil, Daniel Gotera and Jeremy Booth on Twitter to get great insights into the action. We also want to see your Astros fan pics. Text them to us at 713-526-1111 and we may tweet them out or use them here.

RELATED: Red Sox vs. Astros: What to know about the series and the games at Minute Maid

RELATED: Lance McCullers not on the Astros' ALCS roster

#KHOU11 #Astros humble hero @JoseAltuve27 was asked what he was feeling like when he hit his clutch homer tonight. Here's his answer: pic.twitter.com/K5M2bWv6XZ

#KHOU11 #Astros 2nd baseman @JoseAltuve27 was asked what his reaction was when @TeamCJCorrea Carlos Correa hit his solo homer to put the Astros in the lead. Here's his answer: pic.twitter.com/fkBCEfQWPg

The Astros got on the board first as Yordan Alvarez lifted a sacrifice fly to left to score Jose Altuve.  1-0 Astros after one inning.

The @astros are on the board first. pic.twitter.com/Seor6gSh1T

It stayed 1-0 Astros, thanks to this catch with the bases loaded by Kiké  Hernandez.

And, as it often happens, after making the amazing play in the field, Hernandez leads off the third and ties the game with a solo home run.

It is ALL @kikehndez right now!

Jose Altuve tied this one up at 3 with a two-run bomb.

It's a brand new ballgame in Houston. pic.twitter.com/R7lxREumzJ

Carlos Correa gave the Astros a 4-3 lead with this solo shot.

Carlos Correa has 4 career go-ahead HR in the 7th inning or later of playoff games, the most in #Postseason history.#ForTheH pic.twitter.com/PYMfhx7bti

Hernandez then homered again in the ninth to get the Red Sox to within 1.  5-4 Astros.

Fans getting ready for an Astros win!

KHOU 11's Melissa Correa was at Astros Street Fest, talking to fans who were ready for a Houston Astros win!

It was raining earlier in Houston, but that didn't dampen the Astros fans' spirit, as Xavier Walton found.

It's not all Astros fans at Minute Maid Park.  There are Red Sox fans there.  One of those Red Sox fans is KHOU 11 photojournalist Mars Juarez.

Photojournalist @marsthephotog29 seems to have found a friend in the crowd. 🙄 LOL!!!! As I told someone who questioned why #khou11 allowed a #RedSox cap in Houston: we work for a balanced, equal opportunity employer! 🤗 pic.twitter.com/sev8i9YNKt

Outside Minute Maid Park, it was a fashion show of Astros gear.

Getting to Minute Maid Park

There are plenty of surface lots and parking garages in the area. You can find the best one by downloading the Park Whiz mobile app. It will show you how much each lot costs, and it also lets you book a space in advance. Another app that does the same thing is called Park Houston.

You can also take the train to the game! METRO rail purple line riders should exit at the Convention District station, then walk two blocks north to the ballpark. Keep in mind though, the trains share lanes with street traffic, so getting home could take longer.

If you prefer to leave the driving to someone else, Minute Maid has a rideshare pickup and drop-off zone located just outside the center field gate on Crawford Street between Preston Street and Congress Avenue.