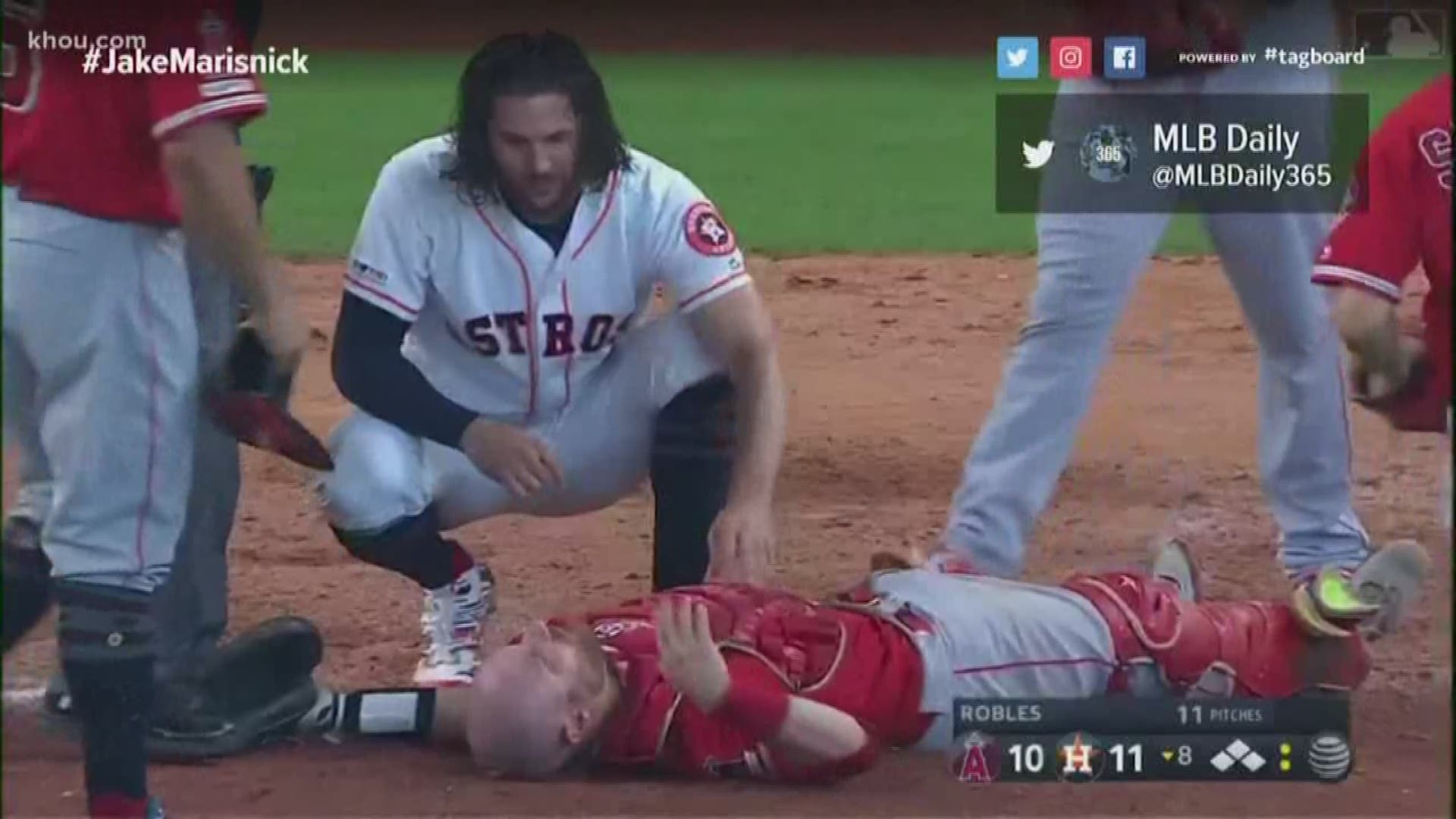 ANAHEIM, Calif. (AP) — The Houston Astros expected the Angels to retaliate against Jake Marisnick in his first game versus Los Angeles since his violent home plate collision with catcher Jonathan Lucroy.

So while the pitch that hit Marisnick in the back in the sixth inning was no surprise, it still left manager AJ Hinch and his Astros profoundly steamed — even after Noe Ramirez insisted he hadn't done it on purpose.

Albert Pujols hit a bases-clearing double during the Angels' six-run first inning, and Los Angeles remained unbeaten in five games since the All-Star break with a 7-2 victory over the Astros on Tuesday night.

But both teams were preoccupied by the moment when Ramirez (4-1) drilled Marisnick between the shoulder blades with a 1-1 pitch in the sixth. Players nearly came to blows moments later, and Hinch vaguely hinted at retaliation if Ramirez isn't punished by Major League Baseball.

"Wasn't everybody expecting something to happen to Jake tonight?" Hinch asked. "I mean, the entire industry was probably expecting it. Our guy got suspended for an unintentional act, and they got a free shot. I feel bad for players nowadays. There's a lot of gray area in what to do."

Marisnick ran over Lucroy while trying to score in Houston nine days ago, leaving Lucroy with a concussion and a broken nose. He is out for at least three more weeks.

Shortly after Ramirez hit Marisnick, a verbal confrontation broke out between Pujols and several Astros in the dugout, including Lance McCullers Jr. and Justin Verlander. Both benches and bullpens partially emptied, but there was no serious physical contact.

"Sometimes you can retaliate, like tonight," Hinch said. "They're going to get away with it, unless he gets suspended. Sometimes you can't, and you get thrown out of the game for backup sliders that hit guys. It's a confusing time. Either the players govern the players on the field like it's always been, or we legislate it to where none of this crap happens. They got a free shot at him with no warning, with no ejection. We'll see if there's discipline, and without discipline, there's not going to be any issue doing it the next time. So if retaliations are in, cool. We're well aware."

Marisnick, a native of nearby Riverside, likely isn't on board with that mentality. He noticeably tried to calm his teammates during the fracas, and he attempted to shrug off the heavy boos that greeted his every move at Angel Stadium.

"It's not what I want," said Marisnick, who had two hits. "It was an unfortunate play back in Houston. I feel terrible about it. To come here and have something like this go down, it (stinks). ... It was a little high, a little inside. There's unwritten rules in baseball, and I think as players we respect them. I think that's a question for him, if it was intentional or not. I'm not the one throwing the baseball."

Ramirez, one of the Angels' most effective relievers, repeatedly insisted the whole thing was a misunderstanding.

"I was just trying to sneak a fastball by him," he said. "I threw two sliders away. I think the scouting report on me is I might sneak a fastball in there after a couple off-speed pitches. I tried to sneak one by him in, and it just got away from me. ... They're a good team, so I wasn't trying to give them any sort of chance. They get a baserunner on, they're a pretty good team. They get a rally going pretty good. That's the last thing I was trying to do."

Hinch didn't believe Ramirez, and the manager also wasn't happy about the way it happened.

"I wish they would have handled it better," Hinch said. "It was too high. If they're going to hit guys, they need to hit guys the right way. They don't need to throw two ... sliders and then throw @ a guy at the neck level. That's not right. That's not the right way to do it, even if you're allowed to do it, which you apparently are nowadays."

Tyler White had three hits and an RBI in the Astros' fourth loss in six games. Their division lead over Oakland is down to 4½ games, matching their smallest advantage since May 9.

With another impressive victory while mourning Skaggs' death, the Angels (50-46) moved four games above .500 for the first time since June 2018, albeit while still in fourth place in the AL West. Los Angeles has scored 54 runs in its last six games.

RELATED: Rangers rally from 4 down to beat Astros 9-8 on Santana hit

Marisnick was booed heavily from pregame introductions onward. He is currently appealing his two-game suspension for the collision.

"The fans were brutal over the dugout," Hinch said. "He was certainly the villain tonight. I think he handled himself well. He was actually the guy that was trying to calm the issue down whenever there was a bit of chirping."

The Angels' first six batters reached base against Astros opener Héctor Rondón (3-2), who gave up six runs on five hits and a walk in just nine batters while failing to get out of the first.

Angels: Trout hopes to return Wednesday. Brian Goodwin came off the injured list after missing nine games with a bruised wrist and went 2 for 4 while replacing Trout in center.

Gerrit Cole (9-5, 3.23 ERA), the Newport Beach native who graduated from nearby Orange Lutheran High School, pitches for Houston against an opener and Félix Peña (7-2, 4.32 ERA), who threw the final seven innings of the Angels' combined no-hitter last week.