Jose Altuve's ninth-inning heroics sent the Astros to the World Series, where they'll take on the Washington Nationals. 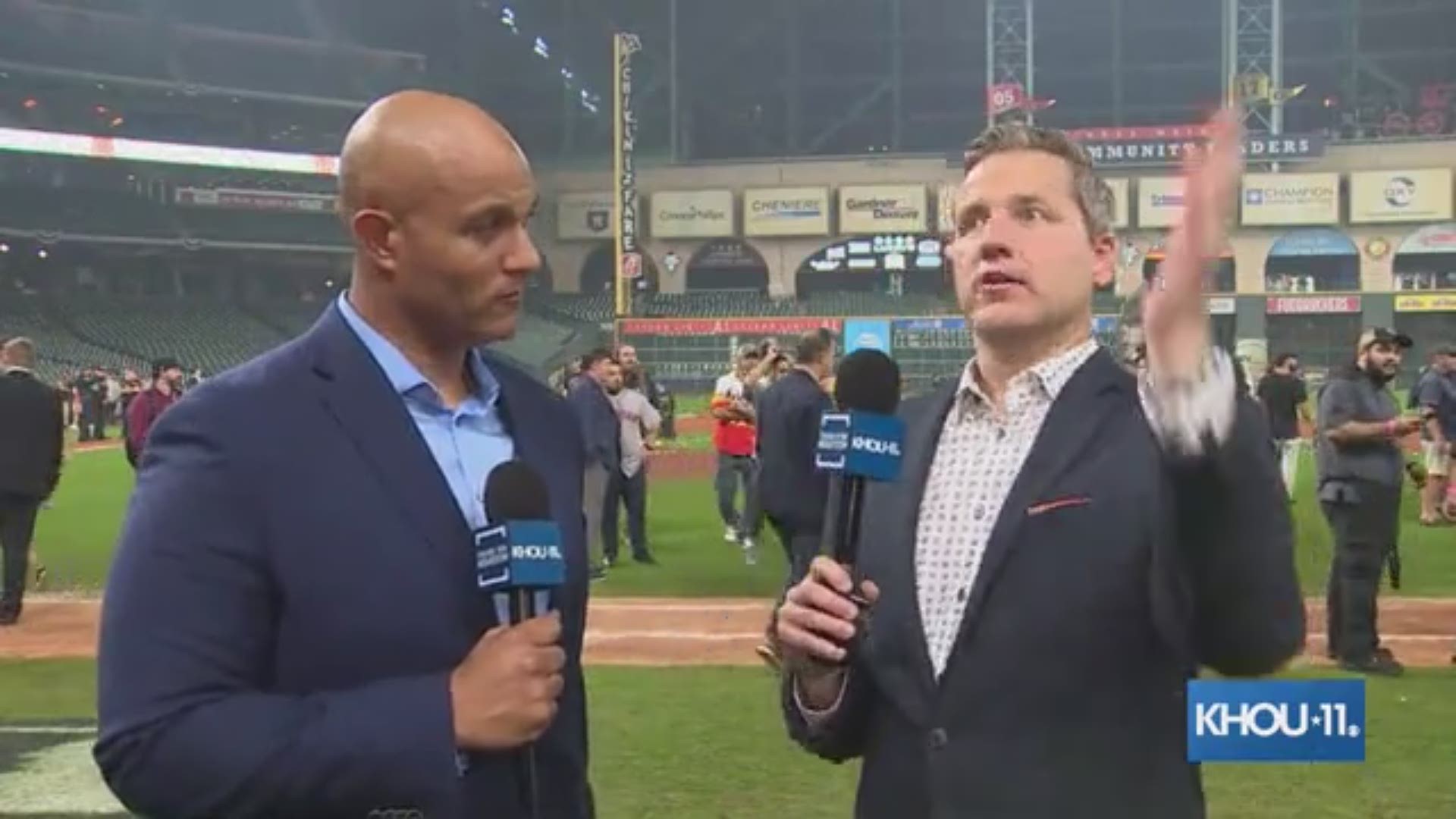 HOUSTON — Jose Altuve, the 5-foot-6 driving force of Houston, delivered a swing that will play in Astros' highlights forever.

Altuve homered off Aroldis Chapman with two outs in the ninth inning and Houston outlasted the New York Yankees 6-4 Saturday night to advance to the World Series for the second time in three years.

In a bullpen Game 6 with a back-and-forth finish, DJ LeMahieu hit a tying, two-run shot off Astros closer Roberto Osuna in the top of the ninth. Altuve answered with a two-run drive to left-center, setting off a wild celebration at Minute Maid Park and earning himself AL Championship Series MVP.

Astros ace Gerrit Cole was waiting to pitch a potential Game 7 on Sunday. Instead, the postseason star — undefeated since May 22 — can be lined up for Game 1 at home against the NL champion Washington Nationals on Tuesday night.

It almost fell apart in the ninth. Gio Urshela singled off Osuna leading off for his third hit of the game, and LeMahieu put a ball into the first row of seats in right field — inches over the glove of leaping George Springer — to tie it at 4.

Altuve, a sparkplug touted as Houston's heart and soul, didn't let this one get away.

"I get asked to describe Jose Altuve all the time," manager AJ Hinch said. "I think MVP is what he is."

The teams combined to use 14 pitchers in a drawn-out game that lasted 4 hours, 9 minutes.

Houston's Will Harris, who got four outs over the sixth and seventh innings and has yet to allow a run this postseason, was glad Houston's bullpen got to show its stuff.

"We have a lot of guys with a lot of pride that are really good at their jobs," he said. "And I was excited for the opportunity for us to prove that today."

The defense helped. Right fielder Josh Reddick dived for Brett Gardner's liner for the second out of the sixth. An inning later, left fielder Michael Brantley laid out for Aaron Hicks' shallow floater and doubled off Aaron Judge at first.

Gurriel, a holdover from Houston's 2017 championship team, was 1 for 20 to start the ALCS before his drive in the first inning. He jumped all over a high-and-tight fastball from opener Chad Green, and his shot into the Crawford Boxes was his first connection this postseason.

It's the third time Houston has eliminated New York in the past five postseasons. The Astros won the 2015 wild-card game in the Bronx and beat the Yankees in seven games in the 2017 ALCS before winning their first title.

"I feel like we are on equal footing with them," Yankees manager Aaron Boone said. "Unfortunately, sports can be a little bit cruel for the team that goes home."

Washington is seeking its first championship in the 51-season history of the Montreal Expos/Nationals franchise. The original Washington Senators won their only championship for the nation's capital in 1924 and last reached the World Series in 1933 before becoming the Minnesota Twins for the 1961 season.

Gary Sánchez had an RBI single in the second and Urshela homered in the fourth for the Yankees.

Alex Bregman gave the Astros an insurance run with an RBI on a forceout in the sixth inning.

Brantley's double play elicited one of the loudest ovations of the night — before Altuve's blast — from the sellout crowd of 43,357 which included Hall of Famers Nolan Ryan and Craig Biggio and Rockets stars James Harden and Russell Westbrook, who watched from the front row in personalized orange Astros jerseys.

New York was 1 for 6 with runners in scoring position and 3 for 24 over the final five games of the series. The franchise lost its fourth straight ALCS after falling in 2010, 2012 and 2017. The Yankees will go without a World Series appearance in a calendar decade for the first time since the 1910s.

"The work never ends," Boone said. "And we'll continue to try and I guess close that gap."

Altuve doubled off Green with one out in the first inning and Bregman drew a walk with two outs. After a short visit to the mound, Gurriel knocked the next pitch into the seats in left field for a 3-0 lead. The runs were Houston's first with two outs in the series.

Houston had been 4 for 40 with runners in scoring position before that big swing.

Brad Peacock, who threw eight pitches in a scoreless eighth inning Friday night, became the fourth pitcher ever to finish a postseason game and then start the next day, and the first since 1924.

He needed seven pitches to retire the side in the first before running into trouble with two outs in the second. Josh James ended the inning by striking out Gardner.

Ryan Pressly had another gutsy escape, too. He hurt his right knee again fielding a bases-loaded grounder by Didi Gregorius but limped over to tag him for the final out of the third. Pressly, who grimaced as he went toward the dugout after one pitch, had arthroscopic surgery on the same knee on Aug. 22 and returned Sept. 20. Pressly also got two strikeouts with the bases loaded in Game 4.

He said that some scar tissue broke off on the play but that he'll be ready to go this week.

Jose Altuve hits a walk-off home run to secure the Astros' berth to the World Series.

Gio Urshela singles to left. Brett Gardner strikes out. DJ LeMahieu hits a 2-run homer to right off of Roberto Osuna to tie the game at 4. Osuna strikes out Aaron Judge.

Jose Altuve grounds out to third. Michael Brantley walks, and Jake Marisnick comes in to pinch run. Alex Bregman lines out to right.With 1 on and 2 out, Yulieski Gurriel singles to right center, and Marisnick advances to third.

Martin maldonado strikes out looking, and Josh Reddick and George Springer ground out to end the inning.

Aaron Judge singles to shallow left as the ball bounces off of Carlos Correa. Gleyber Torres fouls out to first. Aaron Hicks flies out into a double play, thanks to Michael Brantley's diving catch.

Gary Sanchez walks to lead off the inning. Gio Urshela singles to right center as Sanchez advances to second. Josh Reddick makes an incredible catch for the second out as Brett Gardner hits one to right.

Will Harris relieves Urquidy and gets out of the inning.

Martin Maldonado grounded out to center, but it was challenged, and the call was reversed. Josh Reddick flies out to center for the first out. George Springer grounds out, and a double play ends the inning.

Urquidy strikes out Aaron Hicks and Edwin Encarnacion for his third and fourth Ks, respectively.

Jose Urquidy comes in to pitch for the Astros. Gio Urshela hits a solo home run to right center off of Urquidy to cut the Astros' lead, 3-2. Brett Gardner singles with 1 out. DJ LeMahieu lines out to center. Urquidy strikes out Aaron Judge.

Aaron Judge walks with no one on and 1 out. J.A. Happ gets three quick outs to end the inning. Gleyber Torres singles to center, putting 2 on with 1 out. Aaron Hicks flies out to right. Edwin Encarnacion walks to load the bases. Ryan Pressly comes in to relieve Josh James. Didi Gregorious grounds out to end the inning for the Yankees.

Josh James strikes out Brett Gardner to retire the Yankees.

Chad Green strikes out George Springer. Jose Altuve hits a double to deep center with no one on and one out. Michael Brantley flies out to center. Chad Green walks Alex Bregman, and Yulieski Gurriel homers to put the Astros on the board first, 3-0.

Several Houston Texans wore Astros gear to show their support as they headed to Indianapolis ahead of their Sunday matchup against the Colts.

RELATED: Texans sport Astros gear as they head to Indianapolis