The NBA superstar posted on Twitter about the scandal, saying he would be 'irate' if a championship was taken from him by cheaters. 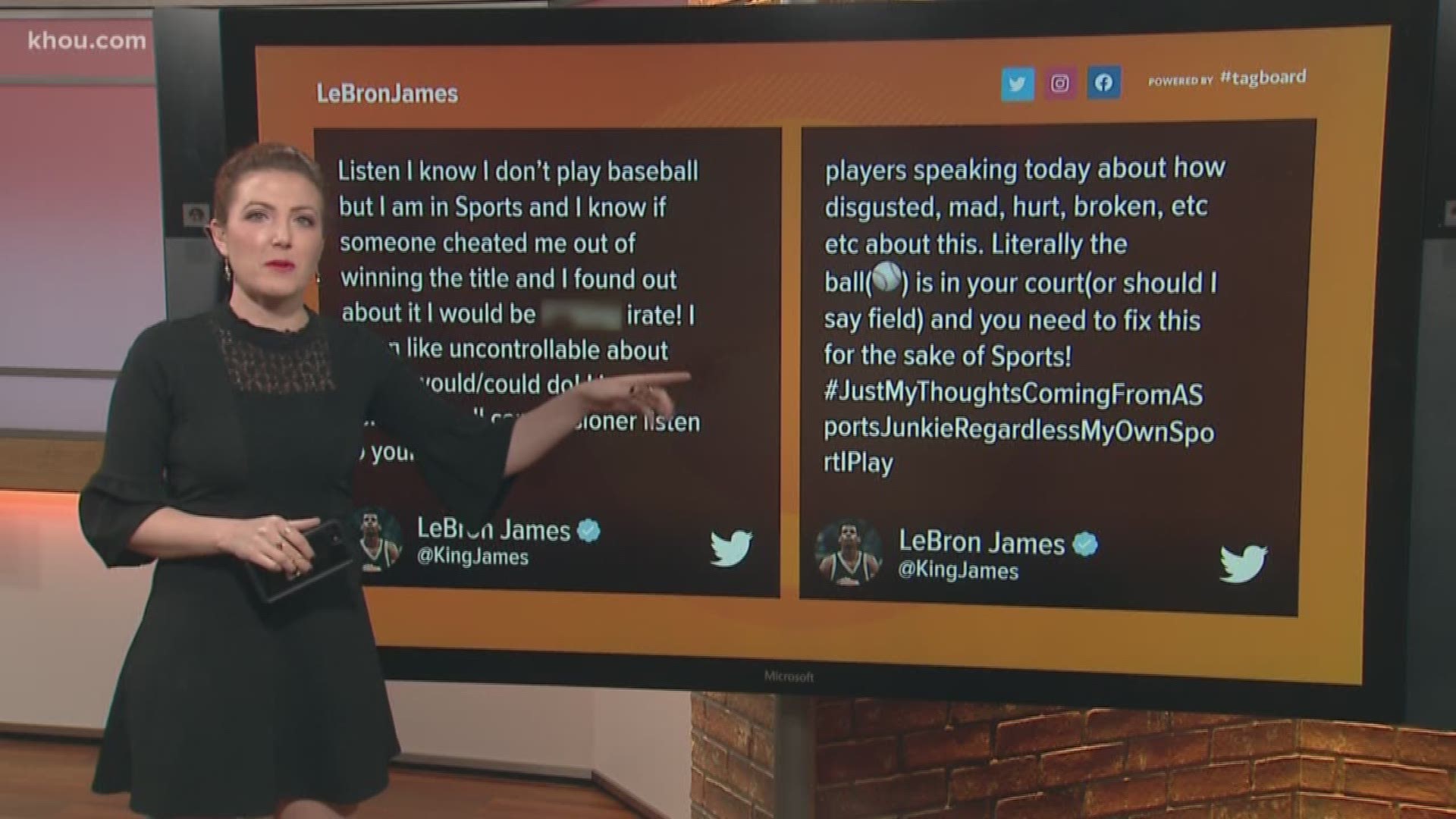 HOUSTON — Add LeBron James to the list of people chiming in on the Astros' sign-stealing scandal.

The NBA star tweeted Tuesday, saying he would be irate if he found out someone cheated him "out of winning the title."

James went on to hint that he has the power to implement punishment of his own when he said "I mean like uncontrollable about what I would/could do!"

MLB determined the Astros were utilizing an elaborate system that included a live feed going directly to the Houston dugout. Players would decipher signs from the catcher and then bang on a trashcan to alert the batter what pitch they thought was going to be thrown.

MLB players have voiced their displeasure about the punishment. Some have said the Astros' 2017 World Series title should be stripped. Others have said players should have faced discipline as well.

Atlanta Braves outfielder Nick Markakis expressed deep frustration with the Astros on Tuesday, telling reporters at spring training that "every single guy over there needs a beating." The veteran Braves outfielder said "it's wrong, they've been messing with peoples' careers," and said it made him angry.

Recently, Astros players have become more outspoken about the scandal. Some have even apologized.

Alex Bregman and José Altuve each offered a brief apology for the sign-stealing scheme.

"I'm really sorry about the choices that were made by my team, by the organization and by me," Bregman said. "I have learned from this, and I hope to regain the trust of baseball fans. I would also like to thank the Astros fans for all of their support. We as a team are totally focused on moving forward to the 2020 season. Thank you.”

"We had a great team meeting last night," Altuve said. "And I want to say the whole Astros organization feels bad about what happened in 2017. We especially feel remorse for the impact on our fans and the game of baseball. Our team is determined to move forward, to play with intensity and bring back a championship to Houston in 2020."

"I showed up (in an August trade in 2017) and once I spent time there and understood what was happening, I wish I'd have said more," Justin Verlander said. "Looking back, I can't go back. I can't reverse my decision. I wish I had said more and I didn't. For that, I'm sorry."

"No one put a gun to our head," Yuli Gurriel added. "It would be a lie to say that one or two people are responsible. We are all responsible."

"Listen I know I don’t play baseball but I am in Sports and I know if someone cheated me out of winning the title and I found out about it I would be F*^king irate! I mean like uncontrollable about what I would/could do! Listen here baseball commissioner listen to your.....

"players speaking today about how disgusted, mad, hurt, broken, etc etc about this. Literally the ball(⚾️) is in your court(or should I say field) and you need to fix this for the sake of Sports! #JustMyThoughtsComingFromASportsJunkieRegardlessMyOwnSportIPlay" 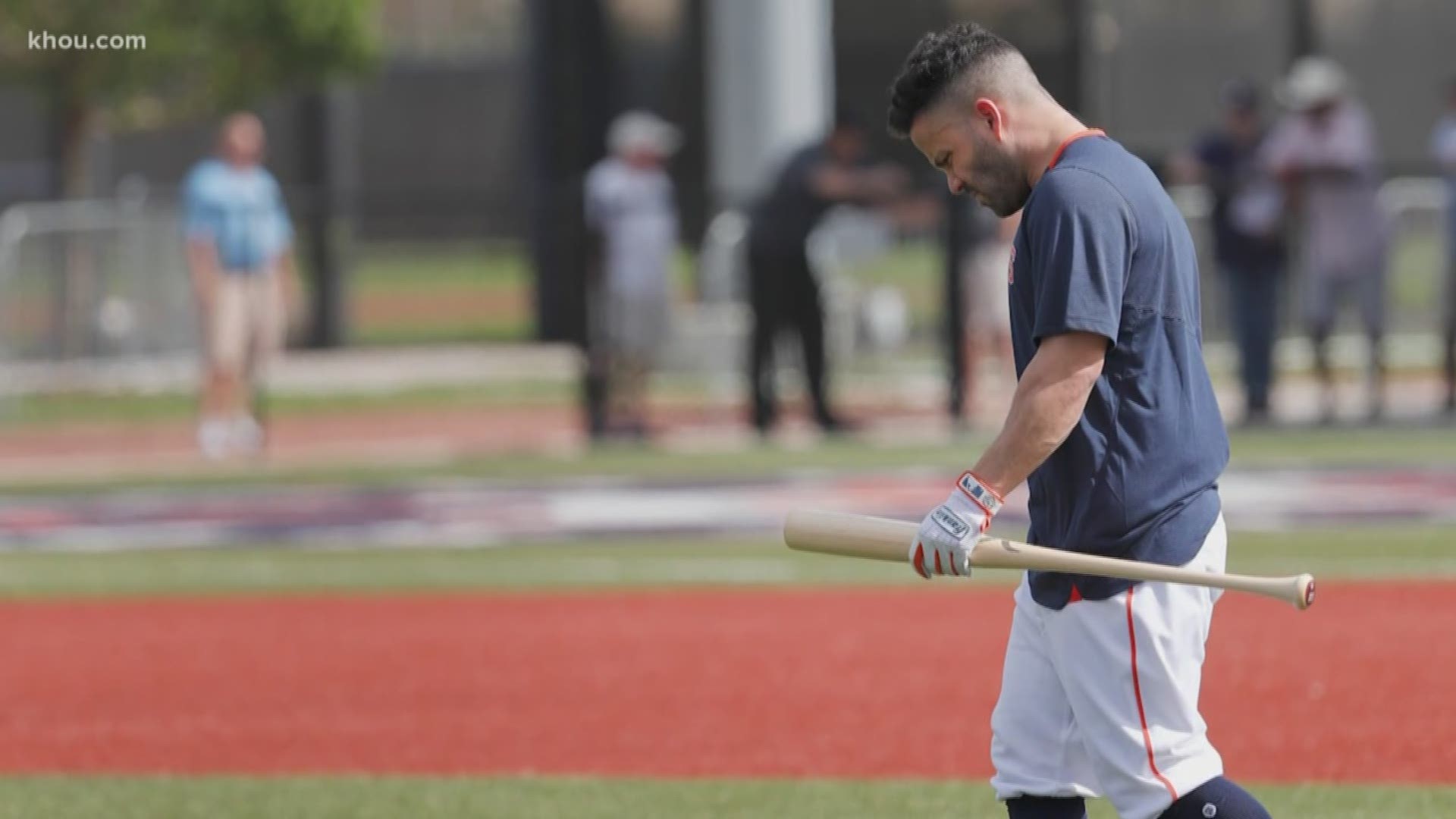