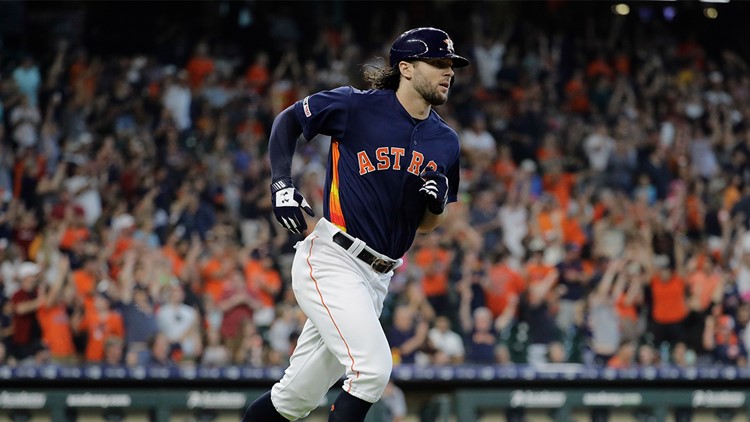 HOUSTON — Jake Marisnick, the long-haired Houston Astros outfielder, joined the team in 2014, but it was a violent home-plate collision earlier this year that garnered him national notoriety.

Here's five things you may not know about him:

That collision cost him two games

The suspension came after a hit that happened as Marisnick began to slide into home plate on July 7, crashing into Los Angeles Angels catcher Jonathan Lucroy. Lucroy suffered a concussion and broken nose.

Marisnick was suspended for two games.

“While I do not believe that Jake intended to injure Jonathan, the contact he initiated in his attempt to score violated Official Baseball Rule 6.01(i), which is designed to protect catchers from precisely this type of collision," MLB’s Chief Baseball Officer Joe Torre told MLB.com.

Marisnick appealed, but ultimately lost and had two sit out two games at the end of July.

When the 'Stros faced the Angels again, LA pitcher Noe Ramirez beaned Marisnick in between the shoulder blades. A verbal confrontation broke out between the Angels' Albert Pujols and several Astros in the dugout, including Lance McCullers Jr. and Justin Verlander. Both benches and bullpens partially emptied, but there was no serious physical contact.

He tried to play peacemaker

As the benches cleared following that hit-by-pitch, Marisnick noticeably tried to calm his teammates during the fracas, and he attempted to shrug off the heavy boos that greeted his every move at Angel Stadium.

"It's not what I want," said Marisnick, who had two hits. "It was an unfortunate play back in Houston. I feel terrible about it.

Marisnick was behind the plate in Game 2 of the 2019 World Series for Biles' ceremonial first pitch.

But the four-time Olympic gold medalist -- and Spring, Texas, native -- didn't just throw the first pitch -- she made sure to flip and twist, too, showing off her skills that have earned her 25 gymnastics world championship titles.

According to MLB.com, Marisnick has a big sweet tooth. While he was playing for the Miami Marlins, he said he was eating too much junk food, and his teammates -- including his close friend, Christian Yelich -- took notice, giving him the nickname "Big Fudge."