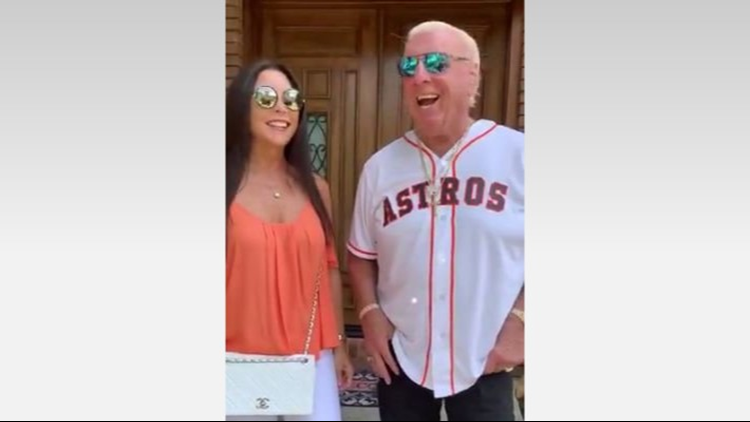 Photo by: Twitter
Ric Flair is fired up for Wednesday night's Astros game where he will throw out the first pitch.

HOUSTON — Ric Flair is fired up for Wednesday night's Astros game where he will throw out the first pitch.

The WWE legend was sporting an Astros jersey when he took to Twitter with fifth wife "Wondrous Wendy."

“Hey, Josh Reddick! It’s the Nature Boy babe, right here in Atlanta, G-A," Flair said on Twitter. “We are headed to WOOOO H-Town, Houston to see the Astros tonight and my great friend and my man, Josh Reddick!"

RELATED: Josh Reddick's Ric Flair-themed bobbleheads are sold out, but you can still get the robe

Reddick is one of Flair's biggest fans. But Flair joked that his wife isn't allowed to have a Reddick Bobblehead, which all fans will receive at tonight's game.

“Not allowed to! I don’t want you going to bed at night, looking at Josh Reddick!”

Flair also had a message for starting pitcher Justin Verlander, saying he'll be ready to relieve him if he gets tired in later innings.

Flair acknowledged he had a "few minor health issues" that stopped him from being able to attend any 2017 World Series, which was won by the Astros.