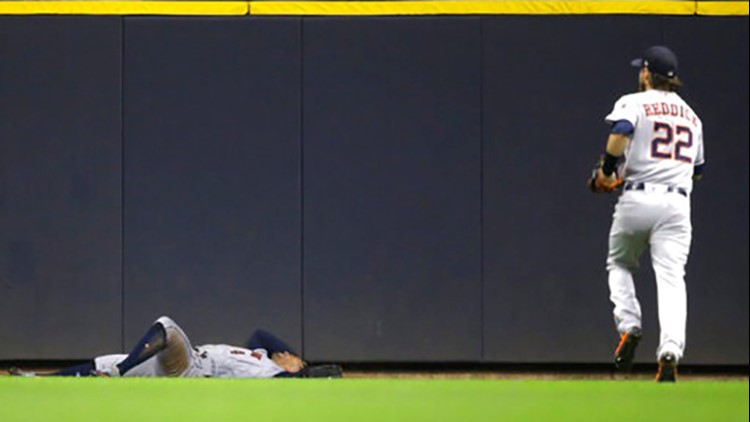 Photo by: AP
Houston Astros' George Springer falls to the ground after making a leaping catch on a ball hit by Milwaukee Brewers' Ryan Braun during the fifth inning of a baseball game Tuesday, Sept. 3, 2019, in Milwaukee.

Springer hit his head against the wall -- hard -- as he tumbled awkwardly after catching the fly ball. He was down for several minutes and in obvious pain before being carted off the field.

"He's doing OK," Astros manager A.J. Hinch said after the game. "He's doing well given all the circumstances of running into a wall. Made a great catch. It was scary for all of us when we got out there."

RELATED: Astros' George Springer carted off field after he collides with wall

Outfielder Josh Reddick told reporters Springer never lost consciousness and was alert and able to answer questions. Reddick said his teammate wasn't dizzy but did have a headache.

Hinch said Springer is 'day to day' and may miss a game or two, according to CBSSports.com

The team has Wednesday off before hosting the Mariners Thursday.