The teams meet again in Game 4 on Monday afternoon. 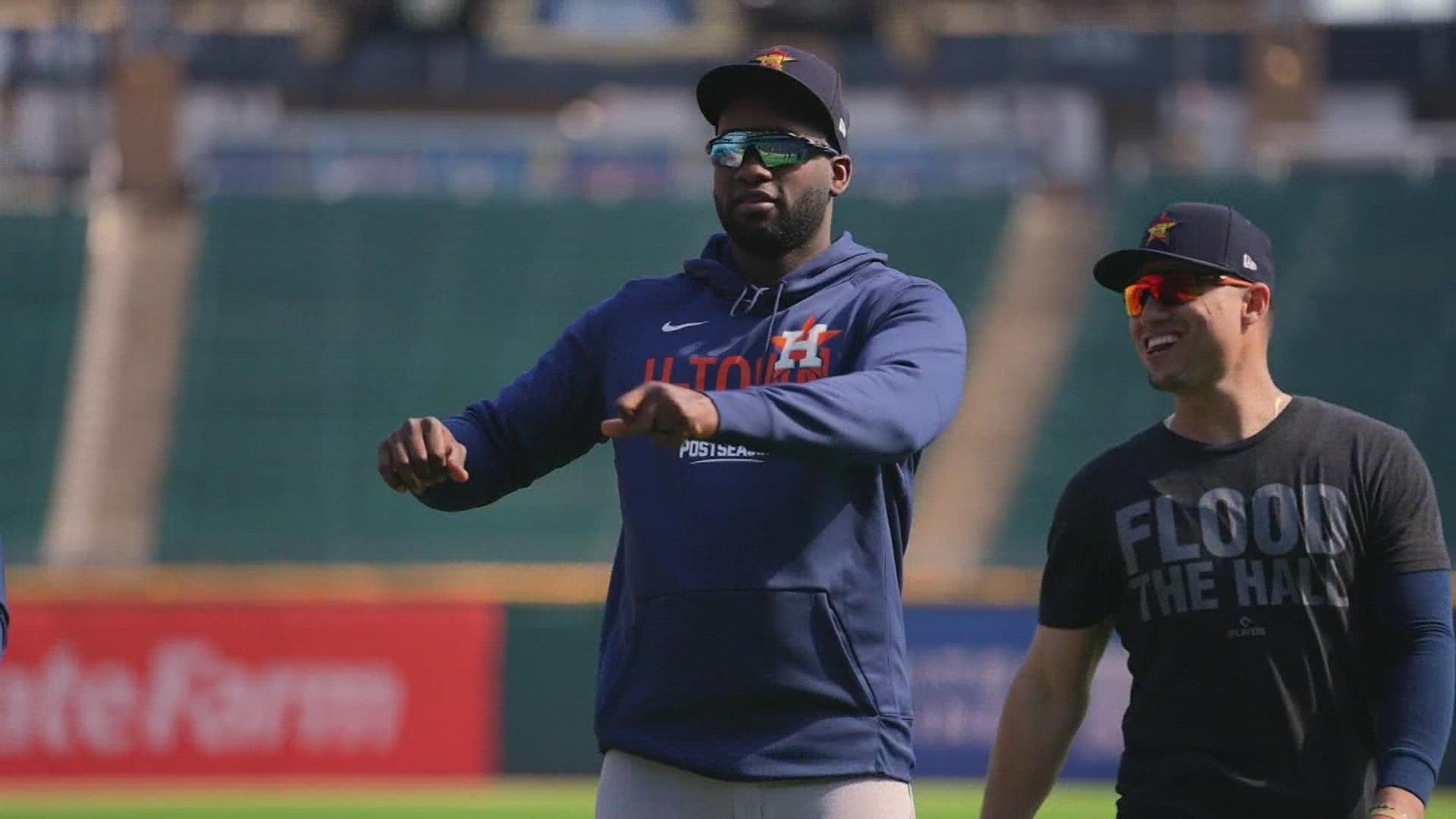 Backed by a boisterous crowd of 40,288, the AL Central champions erased a 5-1 deficit in the franchise’s first home playoff game in 13 years.

Houston was hoping to sweep its way into its fifth consecutive appearance in the AL Championship Series.

Game 4 of the best-of-five series is Monday afternoon.

Houston won the first two games of the series in Houston. Here are the game recaps:

Highlights and key plays from the game:

Luis Garcia started for Houston and gave up a lead-off single to Tim Anderson before getting Luis Robert to line out to center. After getting Jose Abreu to pop out to center, Luis Garcia walked Yasmani Grandal and then gave up an RBI single to Eloy Jimenez. Yoan Moncada lined out to center to end the inning.

Yordan Alvarez led off the top of the second inning with a walk and Carlos Correa followed with a walk of his own.

Kyle Tucker brought both of them home with a two-RBI double to right-center, giving Houston a 2-1 lead.

After a deep flyout to right field by Yuli Gurriel, Jake Meyers stepped to the plate and pulled a ball through the left side of the infield, bringing home Tucker and making it 3-1 Houston.

Meyers stole second during Martin Maldonado's at-bat and Maldonado went on to strike out looking. Altuve worked a four-pitch walk, which led to the end of Cease's night. Michael Kopech entered the game in relief and got Brantley to fly out to end the threat.

Luis Garcia got two quick outs in the bottom half of the inning before walking Cesar Hernandez, turning over the Chicago lineup. Anderson promptly grounded out on the first pitch he saw to end the inning.

Bregman legged out an infield single to start the inning before Alvarez went down looking for the first out of the frame. Correa followed with a fielder's choice groundout to short. Tucker then hit a two-run homer to left. Gurriel struck out to end the inning.

Robert led off the home half with a walk and then Abreu followed with a swinging strikeout on a breaking ball. Grandal then connected with a two-run homer to left, cutting Houston's lead to 5-3.

PUT IT ON THE BOARD! pic.twitter.com/lAqxs9AN2U

Jimenez grounded out and then Moncada and Gavin Sheets followed with back-to-back singles to right. Luis Garcia was pulled after throwing two straight balls to Leury Garcia. Yimi Garcia entered to finish the at-bat and gave up a three-run homer to center, giving Chicago a 6-5 lead.

Hernandez struck out to end the inning.

Kopech started the fourth with a swinging strikeout of Meyers. Maldonado went down looking for the second out. Altuve worked a five-pitch walk, bringing up Brantley who singled to left. Bregman followed with an RBI single to center to tie the game 6-6. Alvarez struck out on a pitch outside of the zone to end the threat.

Three straight singles put the White Sox back on top, 7-6. Zack Greinke then relieved Yimi Garcia with runners on the corners.

An error led to an 8-6 Chicago lead and runners remained on the corners with no outs.

An infield single made it 9-6.

Greinke struck out Moncada and Sheets knocked a bouncing single through the right side to load the bases. Houston got the second out of the inning on a fielder's choice when Gurriel got the forceout at home. Hernandez grounded out to end the inning.

Correa started the fifth inning for the Astros with a flyout to right field. Tucker grounded out to first for the second out of the frame. Gurriel struck out swinging to end the inning.

Meyers hit a long flyball to left field for the first out of the inning and Maldonado struck out for the second out. Altuve struck out looking to end the inning.

Javier struck out two and got a flyout to end the frame.

The Astros went down quietly, striking out three times.

Javier walked the leadoff batter and then got two more outs before being lifted for Ryne Stanek, who got a grounder to end the inning.

Correa struck out and Tucker grounded out before Aaron Bummer was replaced by Craig Kimbrel, who got Gurriel to ground out to end the inning.

Stanek got two outs in the bottom half of the inning before he was lifted for Brooks Raley. Raley gave up a single to Moncada and an RBI double to Andrew Vaughn, making it 10-6 White Sox. An RBI double followed, making it 11-6 Chicago. Anderson singled up the middle to make it 12-6. Robert popped up to end the inning.

Houston went down quietly in the ninth.

Here's a report on how the Astros prepared for this game: