Astros vs. Rays Game 1: Everything you need to know about Street Fest, giveaways and more

Astros officials are asking fans to wear orange today to the rally in support of their hometown team. 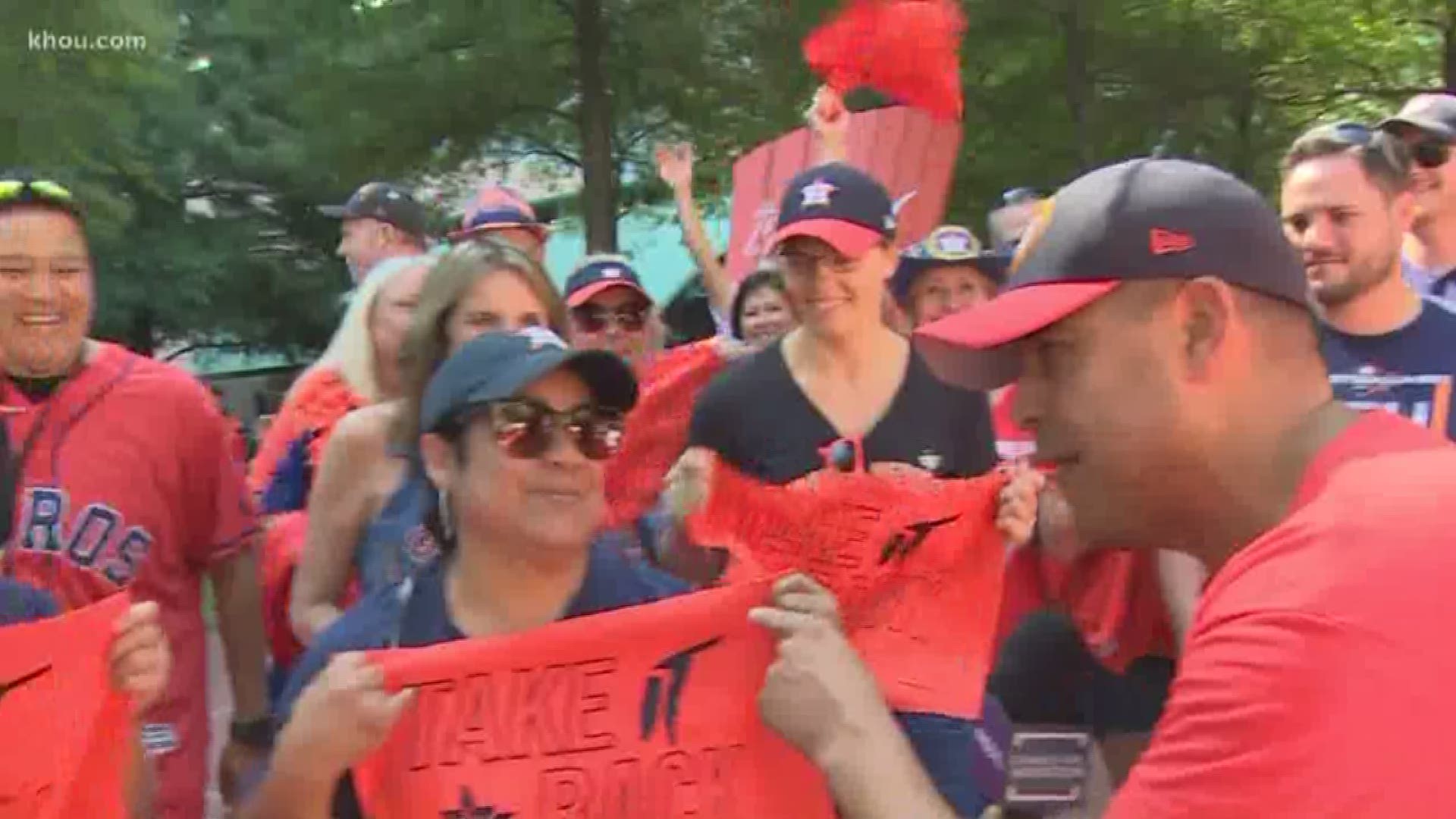 HOUSTON — Are you ready for “Orange Juice Series?”

The Houston Astros held a fan pep rally outside City Hall Thursday in preparation for their match-up with the Tampa Bay Rays in the American League Division Series.

The Astros host the Rays at Minute Maid Park on Friday for Game 1 of the best-of-five series. The game starts at 1 p.m.

The series is being dubbed the “Orange Juice Series” with the Astros residing in Minute Maid Park, affectionately called the “Juice Box,” and the Rays playing their games at Tropicana Field.

HERE'S EVERYTHING YOU NEED TO KNOW FROM THE ASTROS

-- The Astros will host the Tampa Bay Rays in Games 1 and 2 of the American League Division Series here at Minute Maid Park this Friday and Saturday, Oct. 4-5. Friday’s Game 1 will begin at 1:05 p.m. CT with Cy Young candidate RHP Justin Verlander taking the mound against RHP Tyler Glasnow. Saturday’s Game 2 will begin at 8:07 p.m. CT with another Cy Young candidate RHP Gerrit Cole facing off against LHP Blake Snell. The Astros finished the regular season with the best record in MLB with a franchise-record 107 wins, and in the process became just the sixth team in history to reach 100 wins in three consecutive seasons. This season is also the fourth time in five years that the Astros will play in the postseason.

The roof of Minute Maid Park will be closed for both Games 1 and 2 of the ALDS.

During a pregame ceremony for Friday’s matinee, Astros Season Ticket Holders will present a giant U.S. flag and a Take It Back banner in the outfield. A Joint-Service Color Guard will present our nation’s colors before country artist Jack Ingram performs Friday’s National Anthem. Former Astro Lance Berkman will throw out Friday’s ceremonial first pitch to MVP candidate Alex Bregman and Houston rapper Bun B will call “Play Ball!” to kick off Friday’s postseason matchup.

All fans must either have their printed tickets in hand or utilize the MLB.com Ballpark App on their mobile devices to access Minute Maid Park and the Astros Postseason Street Fest for all Astros Postseason games. PDFs, screenshots or any photos of tickets on a mobile device will NOT be accepted, and the Astros will not be able to print tickets on-site. Additionally, there is a no re-entry policy during the postseason.

TRAVELING TO THE BALLPARK

The Astros encourage fans to give themselves extra time to travel to the ballpark as there will be several road and lane closures surrounding Minute Maid Park (specifically Crawford St. and parts of Texas Ave), which will remain in effect starting today, Thursday, Oct. 3 through the end of the Astros postseason run. Astros fans and media should heed all directional signage indicating altered routes around downtown and surrounding the ballpark. Additionally, parking around Minute Maid Park will be limited. Directional signage around the ballpark will also advise fans of postseason entrances, which may vary slightly from the regular season.

The Uber pickup and drop-off area in center field will be available for fans to utilize throughout the postseason. Metro also provides a fast and easy alternative for getting to and from the ballpark. For more information, please visit www.ridemetro.org.

ASTROS ON TV AND RADIO

Fans can catch ALDS Game 1 on the radio on the Astros flagship radio stations 790 KBME AM and in Spanish on La Ranchera 850 AM/101.7 FM, as well as on national stations ESPN Radio and ESPN Deportes 1230 AM. ALDS Game 2 will air on all stations listed above, as well as 740 KTRH AM.

The Astros are asking local businesses, schools, community leaders, organizations and Astros fans to Orange Out Houston by wearing orange clothing and accessories, rocking their Astros apparel, decking out their buildings in orange and creatively displaying their Astros pride throughout the Astros’ postseason run. Astros fans are encouraged to post photos of what they are doing to Orange Out Houston with the hashtag #TakeItBack.

Fans are invited to watch Astros Postseason away games at Minute Maid Park, free of charge, during the Astros ALDS Postseason Watch Parties. Fans will need to claim a free Postseason Watch Party voucher for entry at www.astros.com/watchparty. Fans must present these vouchers at the entrance via the MLB Ballpark app, the same process used for game tickets throughout the year. Parking will be available for purchase in all Astros-controlled parking lots.

Prior to each away game, the fun will begin two hours before first pitch with a Postseason Street Fest on Crawford Street, where fans can enjoy live music, food trucks, bar games, inflatables and much more. The game will stream live on the main video board inside Minute Maid Park as well as on large projection screens outside the ballpark.