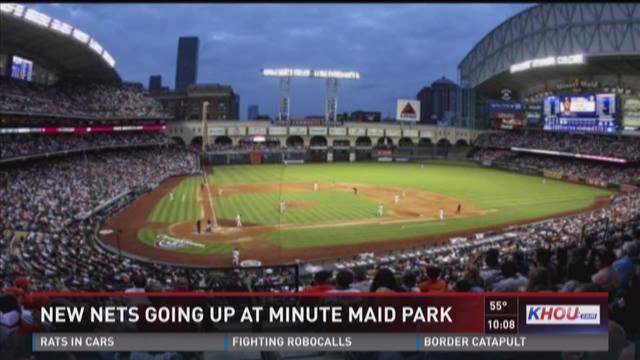 “There’s more distractions than there’s ever been at a ballpark and so we want to continue to make sure that we have fan choice,” said Reid Ryan, President of Business Operations for the Astros.

If you choose to sit close behind your team’s dugout, you will watch behind nets.

The Astros intend to raise netting behind home plate to a maximum 32-feet. The team will also add new 12-foot nets from one dugout to the other.

The nets can rise, lower or move to the side before games so that fans can get players’ autographs.

“I feel comfortable that they’re going up,” said Gina Mescall, a fan who attends 20 games a year.

However, ball players from owner Jim Crane’s alma mater, the University of Central Missouri, in town for a tournament have mixed feelings.

“A net going up might affect that view and the feeling of being that close,” said Noah Arni.

“Part of the fun of sitting close to the field is possibly getting a ball or even getting a bat every once in a while when it gets thrown into the crowd,” Micah Evans said. “So I think it will make it less fun.”

“I think it’s good that the league is doing that just based on fan safety,” said Nick Houston, another fan.

The safety nets should protect more people from screaming line drives. Also, with more and more fans on phones or using apps during games, Ryan sees the need.

“We want (fans) to enjoy the experience,” he said. “Whether that’s bringing your glove and sitting in the Crawford box and trying to catch a home run or if it’s sitting behind the dugout and posting pictures of yourself all game long on social media. We want you to come out and have a good time. That’s what the game (is) about.”

Fans can see the nets for the first time March 3rd.