Since these two teams last met, the Astros have become the league’s villains, with a sign-stealing scandal, casting a shadow on their 2017 title. 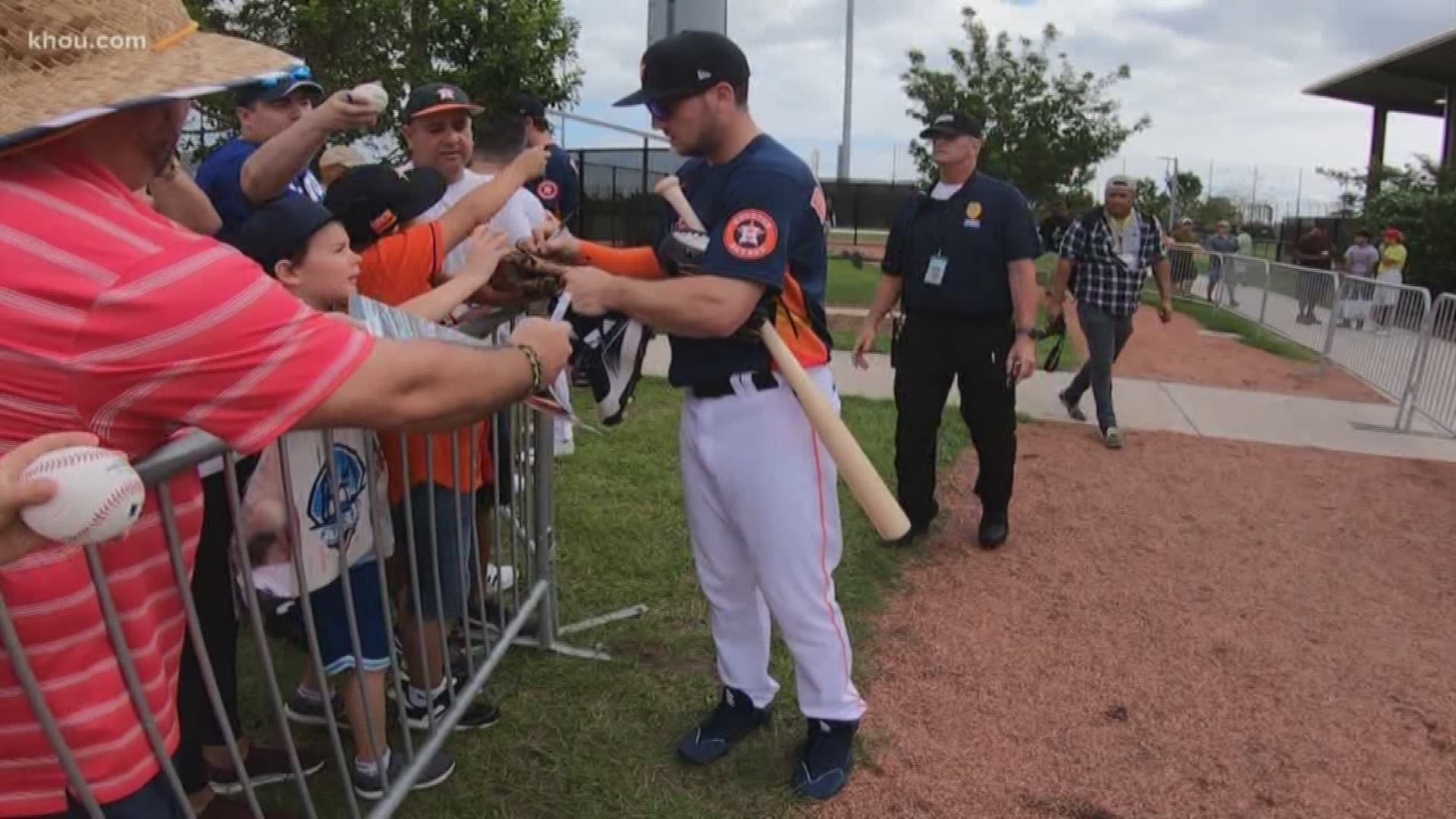 WEST PALM BEACH, Fla — *EDITOR'S NOTE: The above video is from Feb. 17 when Astros fans made the trip to Florida for spring training.*

It will be champs vs. cheaters in a World Series rematch when the Washington Nationals and Houston Astros play their exhibition opener on Saturday night.

The last time these teams met, the Nationals were celebrating their first World Series title in Houston after winning Game 7 at Minute Maid Park. Since then, the Astros have become the league’s villains, with a sign-stealing scandal sullying their reputation and casting a shadow on their 2017 title.

As the Astros prepare to take the field for the first time since their cheating scam was uncovered there’s much speculation about what kind of reception they’ll receive, though the players say they’re focused on baseball.

“Honestly, I haven’t thought about it,” shortstop Carlos Correa said. “But whatever it is, our job is to go there and play baseball. So, I’m not too concerned about that.”

There have been a handful of hecklers at Astros camp this week as the team assembled for the first time since Major League Baseball Commissioner Rob Manfred found they used electronics to steal signs during their run to the 2017 World Series title and again in the 2018 season. The investigation, which led to the suspensions and subsequent firings of manager AJ Hinch and general manager Jeff Luhnow, found the Astros used the video feed from a center field camera to see and decode the opposing catcher’s signs. Players banged on a trash can to signal to batters what was coming, believing it would improve the batter’s odds of getting a hit.

One man banged on a trash can as Astros players took batting practice Monday and someone yelled: “cheater” at second baseman Jose Altuve as he walked by fans the same day.

Correa, who was part of the team that was found to have stolen signs, knows things are going to be “tough” for the Astros on the road this season but doesn’t expect things to be bad in a spring training game.

“But there’s always going to be fans that are going to go to the ball park and have fun in their own way, and that’s talking trash,” Correa said. “And that’s fine. You see that in every sport. So that shouldn’t bother us.”

New Houston manager Dusty Baker hasn’t spent any time concerning himself with how the Astros will be received.

“I try not to worry about things because it doesn’t do any good,” he said. “You can anticipate this or that, but you don’t really know until you get there. So I’m not really worried about the reception.”

While the Astros get peppered daily with questions about their cheating and are constantly being asked to comment on the negative reactions of players around the league, their spring training facility-mates are still basking in the glow of their championship.

On Thursday night, the Nationals continued celebrating their victory with a championship parade in downtown West Palm Beach. Fans cheered as players and staff rode down the street showing off their trophy.

“In 2019 we were the best,” manager Dave Martinez told the crowd at the end of the parade. “We were No. 1. We were the world champs and I want to thank all of you for sticking behind us.”

Max Scherzer will start Saturday for the Nationals. He started and threw five innings in Washington’s 6-2 win in Game 7 that gave the franchise its first title.

The 35-year-old said he’s right where he needs to be and is feeling good as he prepares for his spring debut.

“Max is going to go out there and hopefully get them through the first inning, see how he feels, and if he can get out there for the second inning, that’d be great,” Martinez said. “We’ll cross that bridge when we get there. Right now, it’s just about feel and seeing where they’re at.”

Saturday’s game will also pit Baker against the team that let him go after the 2017 season.

He’s looking forward to seeing many of the people he worked with when he managed the Nationals from 2016-17. And even though it’s the first game, he knows Scherzer will be ready to go.

“I’m sure he’ll probably be the same old Scherz,” Baker said. “He could be pitching at a high school game and he’ll be fired up.”

While people could come out to heckle the Astros, they likely won’t be able to direct their ire at any players who were on the teams that stole signs. Baker said he doesn’t plan to play any of Houston’s regulars Saturday and wants to give the “kids” a chance to play in the opener.

To that end, right-hander Cristian Javier, who was Houston’s minor league pitcher of the year last season, will start for the Astros.

Houston third baseman Alex Bregman, who has taken criticism in recent days for a poorly received apology during a press conference about the sign-stealing, said they can’t spend time worrying about how fans will react. But he did say that it’s a unique situation to start spring training against the Nationals considering their recent history.

“It’s tough to play first against the team that we lost to in the World Series,” he said. “But they deserved it. They outplayed us. They have a great team over there and they really earned that World Series title.”