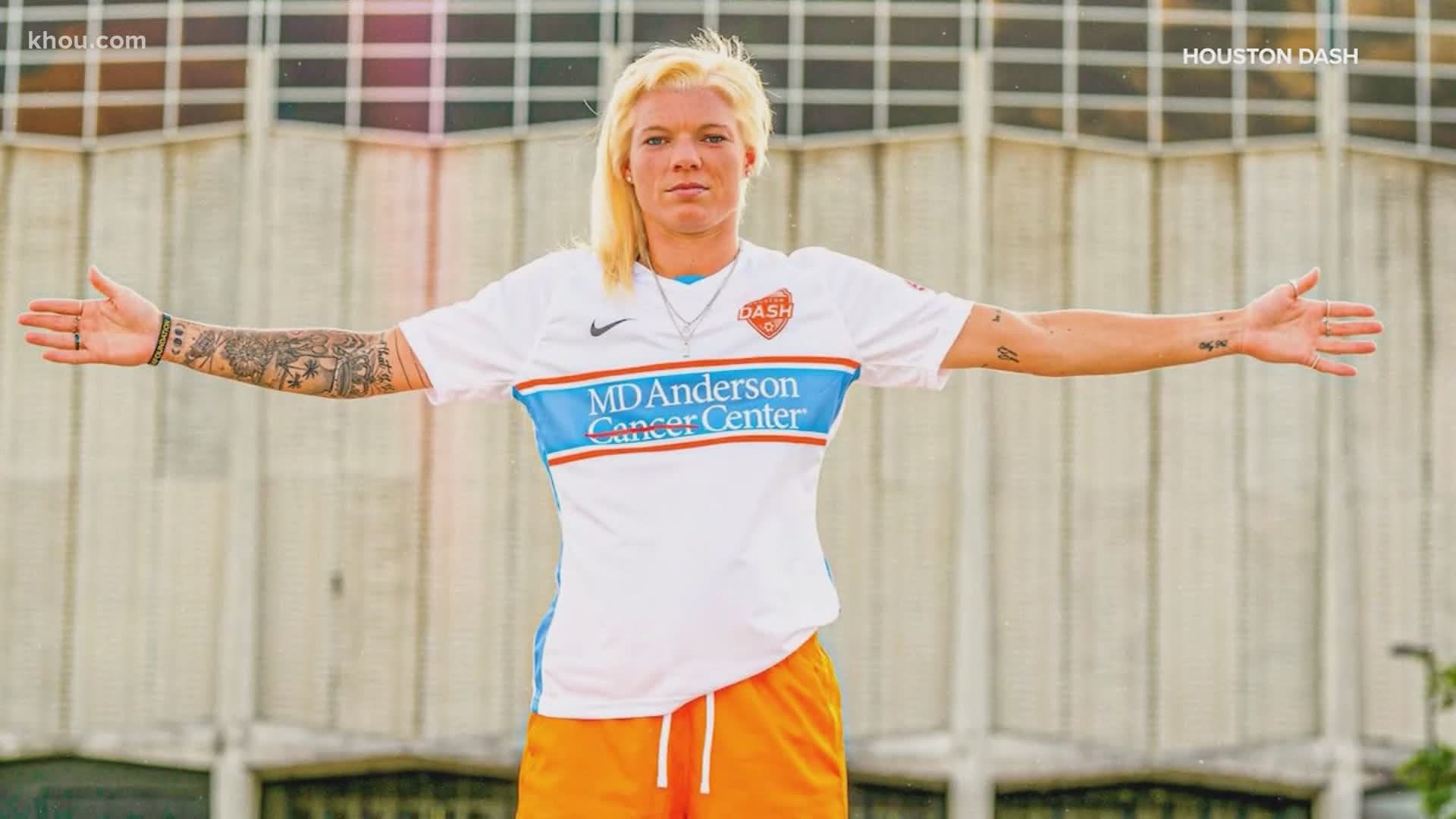 HOUSTON — As the underdog Houston Dash celebrated winning the Challenge Cup title, forward Rachel Daly was asked if she could define the team's identity after the month-long tournament.

Sophie Schmidt scored on an early penalty kick and Shea Groom added a stoppage-time goal to give Houston the trophy with a 2-0 victory over the Chicago Red Stars on Sunday.

The tournament was the National Women's Soccer League's re-boot after the regular season was shut down by the coronavirus outbreak. Houston, in its seventh year in the league, had never previously made the playoffs.

The Red Stars went to the NWSL championship game last season but were routed 4-0 by the North Carolina Courage.

Houston was aggressive from the start. Kristie Mewis was on the run when she was fouled by Kayla Sharples for a Dash penalty kick. Schmidt nailed the PK in the fifth minute. It was the tournament's first penalty kick in regulation.

The Red Stars nearly drew even in the 15th minute, but Savannah McCaskill's header off a rebound hit the post.

McCaskill had another chance from distance in the 67th minute, but Houston goalkeeper Jane Campbell tipped it up and over the crossbar.

The Dash took a hit in the 29th minute when Mewis had to come out of the game with a hamstring injury. She sobbed as she was subbed out.

The NWSL was the first professional team sport to return in the United States. Eight of the league’s nine teams have been sequestered in Utah for the duration of the tournament, which started on June 27.

The league’s ninth team, the Orlando Pride, withdrew shortly before the start because of positive COVID-19 tests. But there were no positive tests in the so-called bubble in Utah for the duration of the event.

The Red Stars were the tournament’s sixth seed going into the knockout round. They advanced to the semifinals on penalties after a scoreless draw with OL Reign, then held off Sky Blue 3-2 on Wednesday.

Chicago had just two total goals in the tournament before the outburst against Sky Blue.

“I think our challenge has been putting away our final crosses and getting some goals this tournament," Chicago's Julie Ertz said. "So I think in the first half after (the penalty kick), we had a really good reaction to it. And it got harder because once they got up 1-0, they dropped really low in the box, so it’s hard to break down when a lot of numbers are in there. Obviously disappointing, but I’m so proud of the girls.”

The Dash were the upstart underdogs of the Challenge Cup, after finishing seventh in the NWSL last season. Daly, who plays for England's national team, led Houston with three goals in the tournament and was the Challenge Cup’s most valuable player.

Daly had a chance to increase Houston's lead in the 73rd minute, but couldn't quite get set after a cross from Nichelle Prince and the shot went wide.

Daly assisted on Groom's goal in the 91st minute. It was Groom's third goal of the tournament and she was named player of the match.

“From day one, we had a goal to win this thing and we took it one step at a time, one game at a time, one minute at a time. And I think obviously we’re excited with how it went today," said Groom, who was traded to the Dash in the offseason.

"Individually, I want to be a part of a club that valued me and wanted to just bring out the best in me, and that’s what they’ve done."