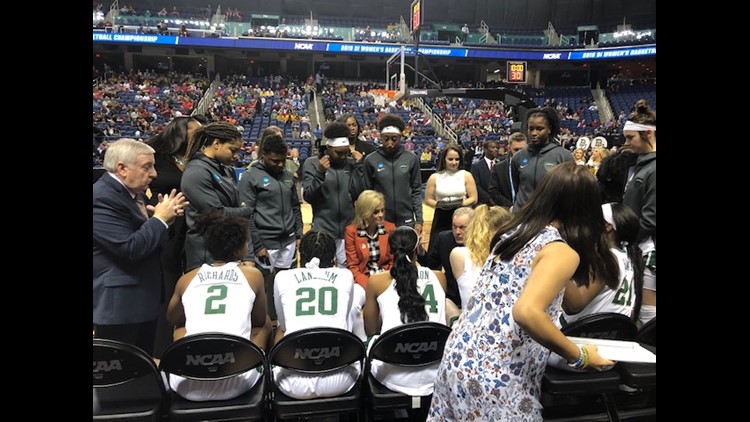 FINALLY! Lady Bears beat Iowa to advance to Final Four for the first time since 2012

GREENSBORO, N.C. — It took seven years and a lot of heartbreaking losses, but after a dominating performance over Iowa, the Baylor Lady Bears are heading to the Final Four.

A three-point shot from La Vega alum Juicy Landrum helped give Baylor the 7-2 lead. But seven early points from ESPN's National Player of the Year, Megan Gustafson, allowed Iowa to tie the game at 11 midway through the first quarter. Baylor led 15-11 at the 2:35 mark thanks to a couple key buckets by Didi Richards.

Baylor led 21-13 at the end of the first quarter. Lauren Cox and Didi Richards had six points and four boards early on. Gustafson led all scorers with nine.

The Lady Bears took a 41-27 lead into the break, with Cox leading the way with 14 points and five rebounds. Gustafson had 12 and 9 at the break.

Baylor came out fast in the second half with a couple of huge plays on defense. Cox, Jackson and NaLyssa Smith all knocked down buckets to help extend Baylor's lead to 20 at the 4:18 mark of the third quarter.

It was more of the same in the final quarter. Baylor went on a 7-0 run over three minutes midway through the fourth, while Iowa did the opposite. The Hawkeyes went on a 3:36 scoring drought and they turned it over four times in that time frame.