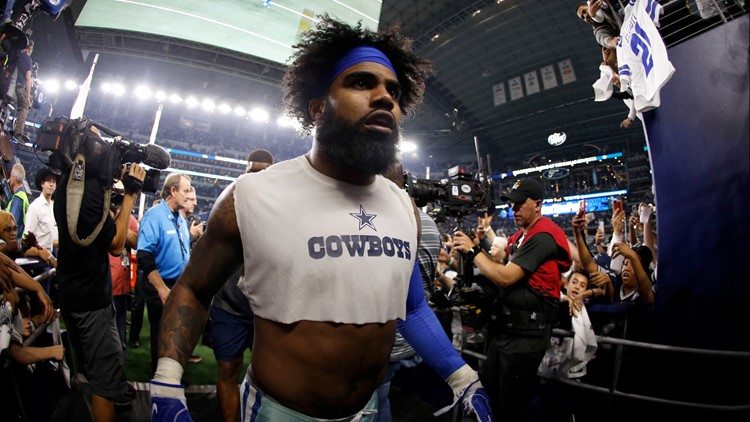 Photo by: AP
Dallas Cowboys running back Ezekiel Elliott heads to the clubhouse after a 2019 playoff game. (AP Photo/Ron Jenkins)

Dallas Cowboys RB Ezekiel Elliott plans to hold out of training camp until he gets a new contract, report says

FRISCO, Texas — The Dallas Cowboys will be at training camp in less than two weeks, but their superstar running back may not be, reports Pro Football Talk.

Ezekiel Elliott "has privately said that he will hold out of training camp unless he gets a new contract," says Mike Florio of Pro Football Talk.

Elliott is arguably a Top 3 running back in the NFL and his case for a new contract is warranted.

While teams and fans despise holdouts, many star players like Elliott are forced to use whatever leverage they have.

Since being drafted fourth overall in 2016, Elliott has led the league in rushing twice and been named to the Pro Bowl in 2016 and 2018.

The Cowboys running back has two years left on his rookie contract, including the fifth-year option picked up by the team in April.

Running backs often have a shorter shelf-life in the NFL and, therefore, are expendable to many teams once they reach a certain age or career workload.

Elliott turns 24 next week. He was crowned the NFL rushing champion in the two seasons he played more than 10 games.

Unfortunately for the Cowboys, Elliott plans to use the biggest bargaining chip he has — not playing until he gets a new deal.