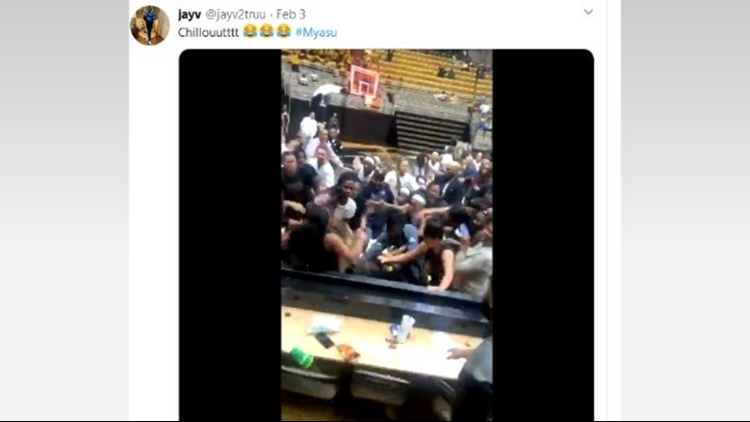 Photo by: @jayv2truu / Twitter
A full-blown brawl broke out involving a bunch of players from TSU and ASU after a game in Montgomery, Alabama.

The fight started after the TSU women's basketball team clobbered ASU on their home court in Montgomery.

The teams were supposed to shake hands at the end of the game, but punches were thrown instead.

It took several security personnel and coaches to break up the fight.

Some of the players limped off the court and appeared to be injured.

The SWAC has suspended five TSU players and 5 ASU players, along with two ASU managers.

Ciani Cryor and Britnee Gabriel are suspended for the Lady Tigers’ next game against Prairie View A&M this Saturday.

Jekalen Jones, Niya Mitchell, and Tamaria White are suspended for the Prairie View game and the February 15th game against Jackson State.

"We are deeply disappointed by the events which took place at the conclusion of Monday night's game," Texas Southern Vice President for Intercollegiate Athletics Kevin Granger said in a statement Tuesday. "The incident has overshadowed the efforts of our team's success on the court as this directly counters the expectation of sportsmanship which has been placed upon our student athletes by Texas Southern and the Southwest Athletic Conference.

"The conduct of a few of our women's basketball players at the end of the game was unacceptable," Williams' said. "That type of behavior is not a true reflection of who we are at Alabama State University. We have begun the necessary steps to review all of the footage from the event, along with the Southwestern Athletic Conference (SWAC) to determine the appropriate action necessary."

"I am extremely disappointed by the behavior of our women athletes at the end of their game against Texas Southern University," Ross said. "Alabama State University has a zero-tolerance policy for this type of behavior."