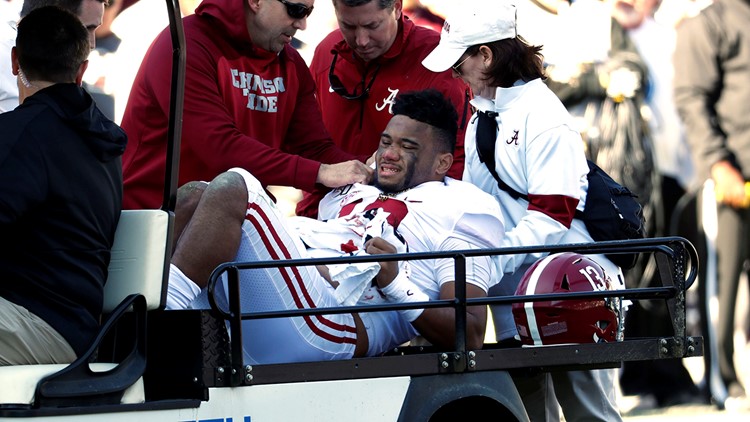 Photo by: AP
Alabama quarterback Tua Tagovailoa (13) is carted off the field after getting injured in the first half of an NCAA college football game against Mississippi State in Starkville, Miss., Saturday, Nov. 16, 2019. (AP Photo/Rogelio V. Solis)

HOUSTON — Alabama quarterback Tua Tagovailoa will have his hip surgery done in Houston, according to the Andrews Sports Medicine and Orthopedic Clinic.

Tagovailoa will miss the rest of the season. He suffered the injury late in the first half of the Crimson Tide’s victory over Mississippi State on Saturday.

Tagovailoa was injured while being dragged down late in the first half, with the Tide up four touchdowns. No. 4 Alabama went on to beat Mississippi State 38-7.

Alabama coach Nick Saban said the plan was to remove Tagovailoa from the game before the series when the quarterback was injured. Alabama was leading 35-7, but it was decided to let Tagovailoa play one more possession to get some work in the two-minute drill.

“We can second guess ourselves all we want,” Saban said. “We told Mac (Jones) to warm up and we were going to go 2-minute before the half. Tua wanted to play in the game and so I don’t really make a lot of decisions worrying if a guy is going to get hurt.”

Tagovailoa had been nursing an ankle injury and Alabama was considering holding him out of the game.

RELATED: JJ Watt's new shoes are in honor of his late grandfather, proceeds will go to Honor Flight Network

RELATED: NFL playoff picture: Here's who is in if it started today