That girl, who was hit by Chicago Cubs player Albert Almora, Jr.'s line drive, was sitting just a few feet beyond the protective netting at Minute Maid Park. 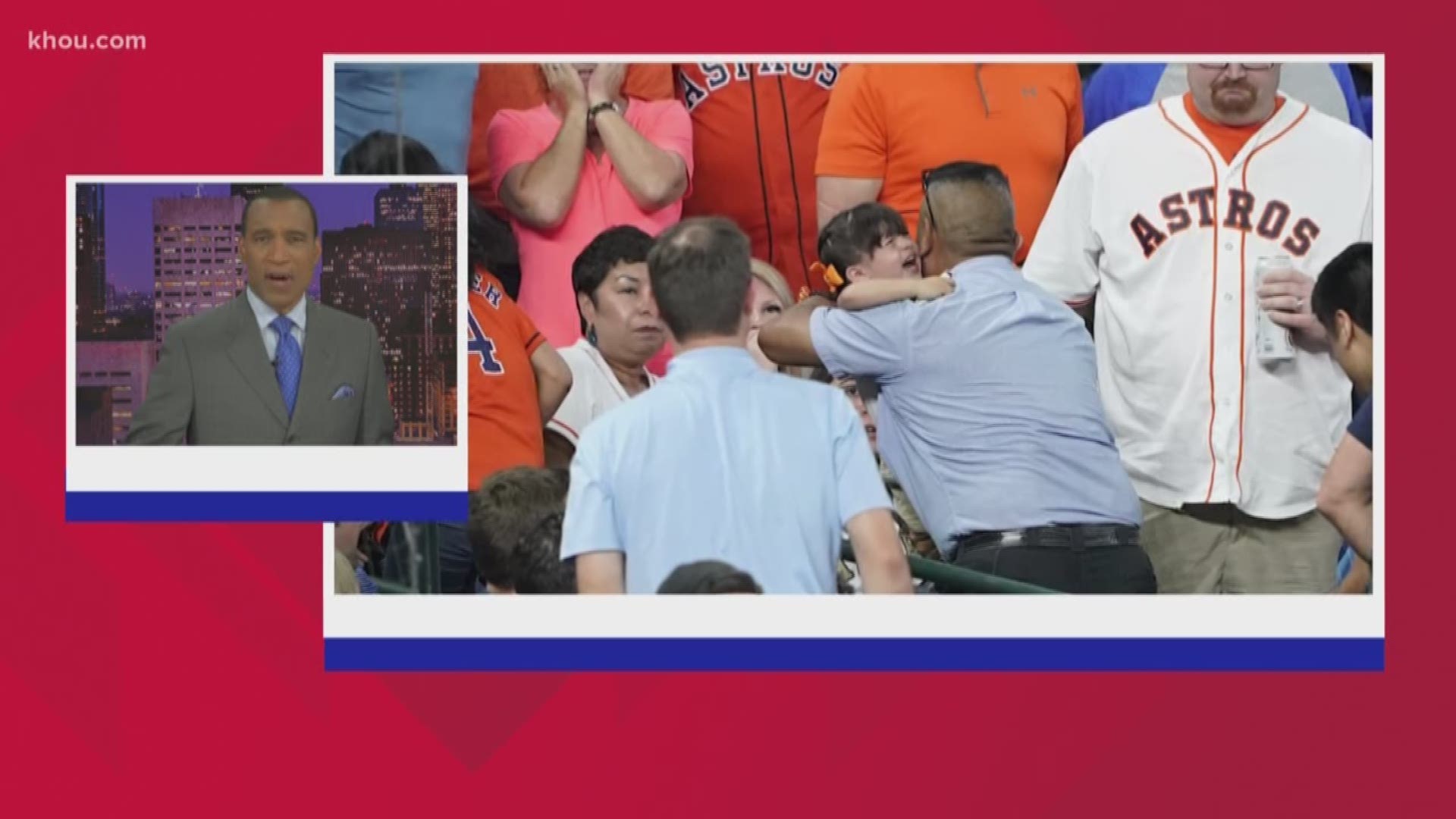 HOUSTON — A little girl is recovering Thursday after being hit by a foul ball at Wednesday night’s Astros game in Houston.

Astros officials on Thursday would not say anything more on her condition, telling KHOU 11 the girl’s family is asking for privacy. She has not been identified.

RELATED: ‘What will it take? Someone dying?’ | Some say the MLB should require full netting ‘before it’s too late’

That girl, who was hit by Chicago Cubs player Albert Almora, Jr.'s line drive, was sitting just a few feet beyond the protective netting at Minute Maid Park.

Other fans have been seriously injured by foul balls in the past. A woman died in 2018 at Dodgers Stadium.

On Thursday, viewers on KHOU 11’s Facebook page had strong opinions on whether professional baseball teams should extend the netting behind home plate to go all the way down the foul line.

A 2018 study by Indiana University found fans' risk of being hit by a foul ball has recently gone up because those hits are faster, and fans are sitting closer.

"Fans today frequently sit more than 20 percent closer to home plate than was the case throughout most of the 20th century," said Nathaniel Grow, an associate professor of business law and ethics at Indiana University’s Kelley School of Business. "When you combine that with an increase in the speed with which baseballs are being hit into the stands, fans have less time to avoid errant balls or bats heading in their direction."

That study also found a typical foul ball enters the stands at 100 to 110 miles per hour.

After several fans were hurt by hard-hit balls in 2017, MLB officials announced netting at all 30 ballparks would be extended to at least the end of both dugouts for the 2018 season. The Astros had extended their own netting to that point in 2017.

After Wednesday’s game, Kris Bryant of the Chicago Cubs told ESPN he wants to see more.

"Let's just put fences around the whole field,” Bryant told ESPN’s Jeff Passan. “It's so sad when you see something like that happen."

In Japan’s Tokyo Dome, nets extend from foul pole to foul pole. If a ball makes it over the netting, or even during a home run, security staff members blow whistles to alert fans.

Major League Baseball officials released the following statement Thursday in response to questions from KHOU 11 on whether they are considering additional ballpark safety measures:

“The events at last night’s game were extremely upsetting. We send our best wishes to the child and family involved. Clubs have significantly expanded netting and their inventory of protected seats in recent years. With last night’s event in mind, we will continue our efforts on this important issue.”

On Thursday, Astros officials told KHOU 11 they are not currently planning any additional safety steps.