“It’s causing people to be distracted. They’re going around catching these pikachus." 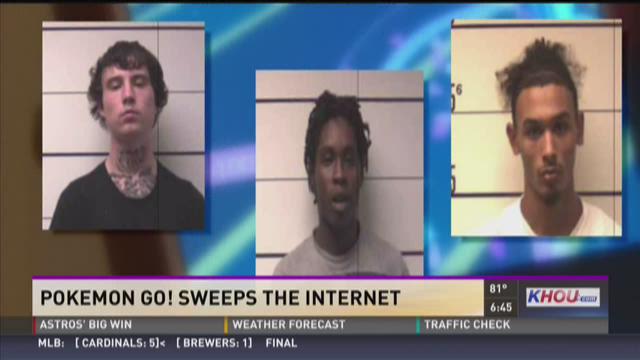 Traveling across the land, searching far and wide hasn’t exactly worked out for all Pokémon Go users. After luring victims to their location with the new "augmented reality" app, four suspects have been arrested as police in O’Fallon, Mo., responded to a report of an armed robbery early Sunday.

The teens are suspected to be behind 10 to 11 armed robberies in St. Louis and St. Charles counties in which they allegedly used the app to bait victims, according to Sgt. Bill Stringer. Police also recovered a handgun from the suspects’ black BMW.

“The way we believe (the app) was used is you can add a beacon to a Pokéstop to lure more players,” the O’Fallon Police Department wrote in a Facebook post.

The teens were identified as Brett Miller, 18, Jamine Warner, and Shane Backer, both 18.

The app, which allows users to interact virtually with Pokémon characters nearby in the real world, has a “Lure Module” that players can use to attract both Pokemon and other users to their location. Pokéstops are locations where players can collect items and level up faster.

No other Pokémon Go related crimes have been reported in the area, according to Stringer.

The app was released in July but has already caused issues around people’s physical safety, such as driving while using the app.

Another user on Reddit said he and his friends were nearly arrested for playing the game near their town's city hall.

The Pokémon Company International and Niantic, Inc., released a statement Sunday evening in regards to the alleged robberies.

"We are aware that some incidents have occurred involving fans playing Pokémon GO. We encourage all people playing Pokémon GO to be aware of their surroundings and to play with friends when going to new or unfamiliar places," the statement said. "Please remember to be safe and alert at all times. We are humbled by the overwhelmingly positive response to Pokémon GO and greatly appreciate the support of our fans."