“We are at risk of significant flooding,” the governor said at a press conference in advance of the storm’s expected landfall late Friday or sometime Saturday. 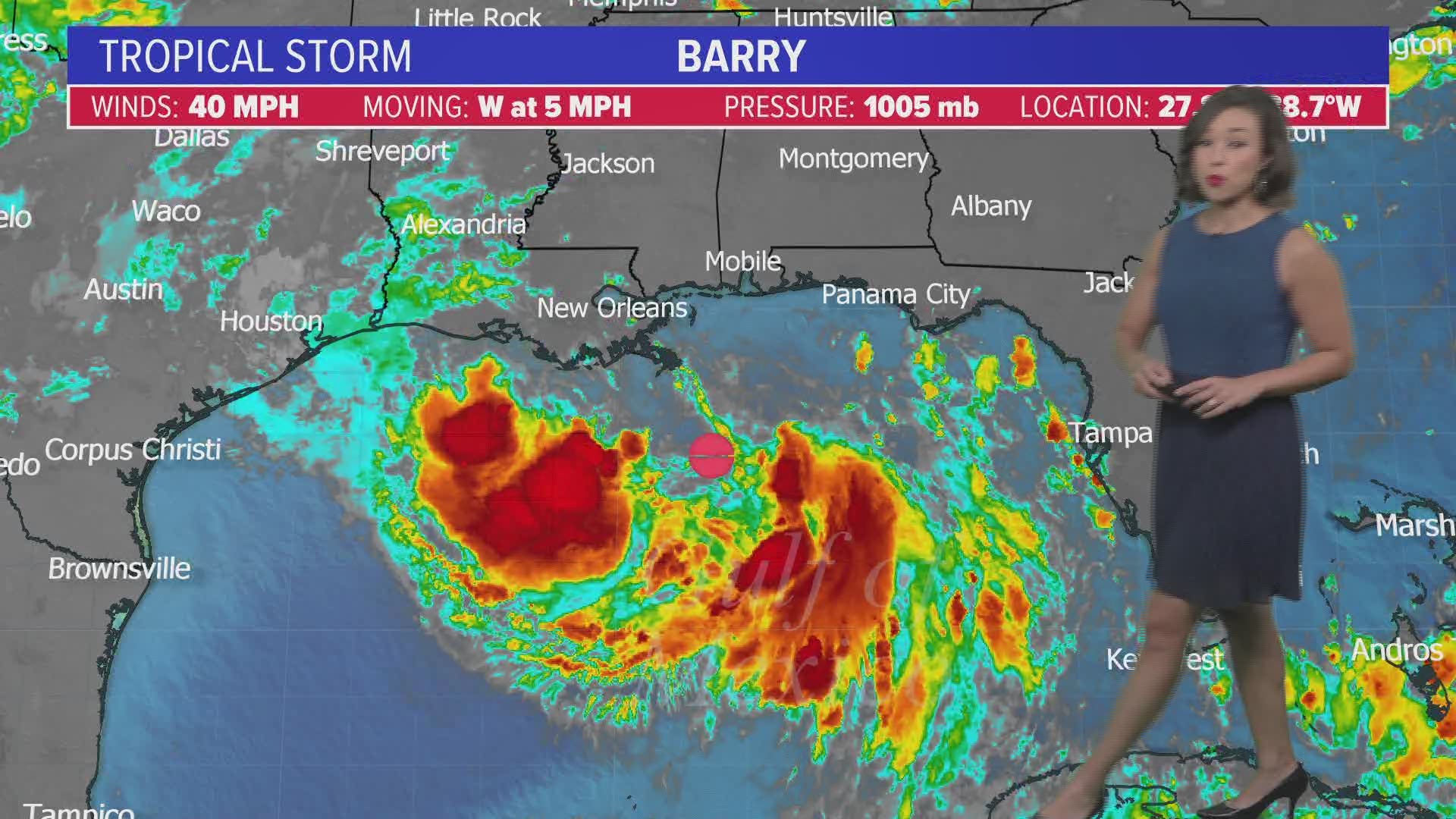 BATON ROUGE, La. — As of 10 p.m. Thursday, Tropical Storm Barry has strengthened slightly with winds of 50 mph, although these are not at the center of circulation, which remains very broad.

Pressure is the same and motion is nearly stationary; to the west at 3 mph. Dry air over the center and strong northerly wind shear are preventing thunderstorms from developing around Barry’s center and also preventing the circulation from becoming more tightly wound.

It’s possible that Barry will remain very lop-sided up to landfall. Models continue to steadily strengthen and organize Barry prior to landfall, that just is not happening at the moment.

The Euro model seems to be the best at initializing, with the thunderstorms currently in the southern half of the storm. The Euro doesn’t bring the heaviest rain to the eastern side of Barry until just after landfall. At that point, the heaviest rain would be from Baton Rouge, westward.

The Euro predicts 3-6” of rain over the weekend for our viewing area, with 10+ west of us. All eyes will be on when, if at all, Barry begins a turn toward the north. If soon, we are more under the heaviest rain threat. If later, like the Euro says, the heaviest rain stays farther west. Flooding is still our greatest concern at this time.

Governor John Bel Edwards said that Louisiana can expect Barry to be a Category-1 hurricane at landfall and a “major rain event.”

“We are at risk of significant flooding,” Edwards said at a Thursday press conference in advance of the storm’s expected landfall late Friday or sometime Saturday.

All through southeast Louisiana, summer camps, college and school campuses and other programs and events have been canceled.

Sandbags are being provided in many parishes and there are a small number of mandatory evacuations, like Lafitte, Crown Point, Barataria and Grand Isle.

With 10-15 inches of rain expected in the New Orleans metro area through Saturday, residents are being encouraged to make sure they have food and supplies for 72 hours in case flooding makes getting around a problem.

Get the tracks and models for Tropical Storm Barry

Wednesday’s ‘preview’ of possible coming flooding showed the limitations of the pump system to quickly dry out a city during a rain of several inches in a short period of time.

“We cannot pump our way” out of the expected rainfall, said Mayor LaToya Cantrell.

The mayor said the city would not be calling a voluntary or mandatory evacuation.

Some good news came as the Army Corps of Engineers said that the Mississippi River levels, expected to be as high as 20 feet Saturday, following Wednesday’s downpour, has now been lowered to an expected peak at 19 feet.