There's a coronavirus rumor going around through text messages about the Stafford Act and a national quarantine. It's all fake. 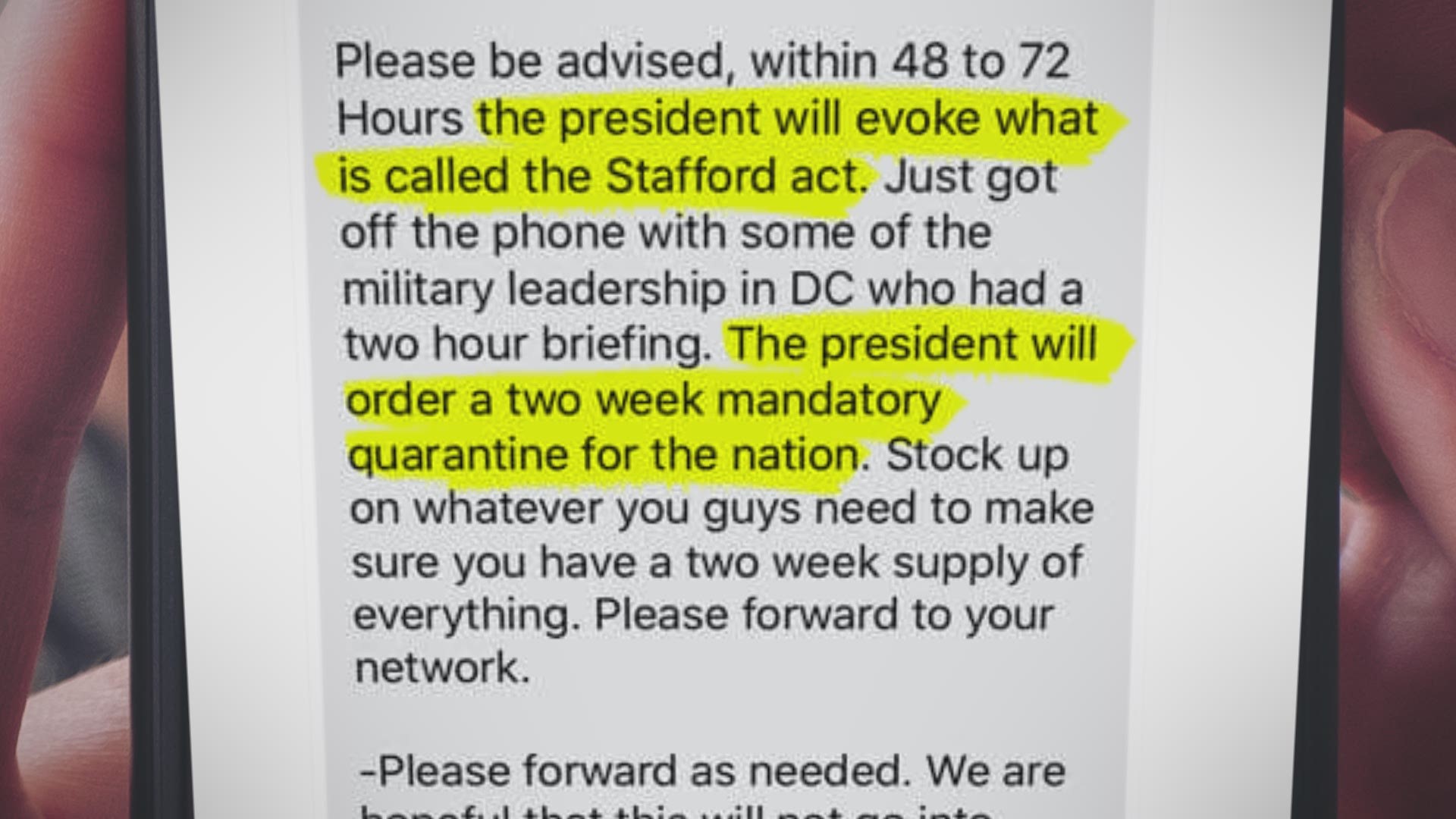 Last week, a voicemail warning of a mandatory quarantine by the federal government went viral. There was no evidence to support it was real.

A similar claim has now taken off to start this week.

This time, the claim is that President Donald Trump will invoke the Stafford Act in the next few days to order a mandatory quarantine for two weeks.

The claim has primarily spread through similar text messages. But just like last week's viral voicemail, these text messages are full of references about vague friends or other individuals as sources.

And just to be clear, there is no evidence to support either of these viral rumors.

The president can’t use the Stafford Act for that. Government channels have said this text message chain is fake.

Let’s make this clear from the beginning: this rumor is fake. The National Security Council has denied it, as have other government social media channels.

But even if there was any merit to it, the Stafford Act can’t be used to create a national quarantine.

The Stafford Act is all about disaster relief. In fact, President Trump invoked the Stafford Act last week when he declared a national emergency. The Stafford Act was used to declare major disasters an average of nearly 36 times a year between 1953 and 2016. Its usage is not uncommon.

The text of the Stafford Act itself makes no mention of quarantines, shutdowns or lockdowns of any kind.

This chain message actually shares a lot in common with last week’s voicemail.

Both call for the people receiving them to stock up as groceries -- something that would exacerbate the panic-buying problem already occurring. As stated before, vague anonymous sources are cited. Since they are similar, here’s a reminder to be skeptical of these chain rumors.

Many false chain-mail rumors cite a friend of a friend, a friend’s relative or a vague relative that people who know the original sender are unlikely to ever meet. The sources for these rumors are always unnamed. It makes it hard to track down the original source and verify the authenticity of the rumor.

They also write the rumor to be impossible to definitively prove or disprove without a response from official sources. Both claims acknowledged the announcement hadn’t been made yet but was about to be made in the near future. It’s difficult to disprove something that is supposed to happen in the future.

And, based on other countries’ quarantines, the call to stock up on groceries doesn’t make sense. The measures in Italy’s quarantine are restrictive -- people must formally declare a reason for leaving their homes to local authorities -- but not even Italy is preventing their citizens from accessing basic necessities. Grocery stores and pharmacies are still open. People can still go to work if they absolutely need to leave their homes to work. The Italian government has also announced grocery stores will continue to be restocked during the quarantine.

RELATED: VERIFY: What Italy is experiencing under nationwide quarantine

These kinds of messages are spread to create panic. The AP has reported U.S. officials warn of foreign disinformation trying to stoke fears related to the virus. The best thing to do is not spread these messages.