Dr. Amesh Adalja is an infectious disease physician and researcher for Johns Hopkins. 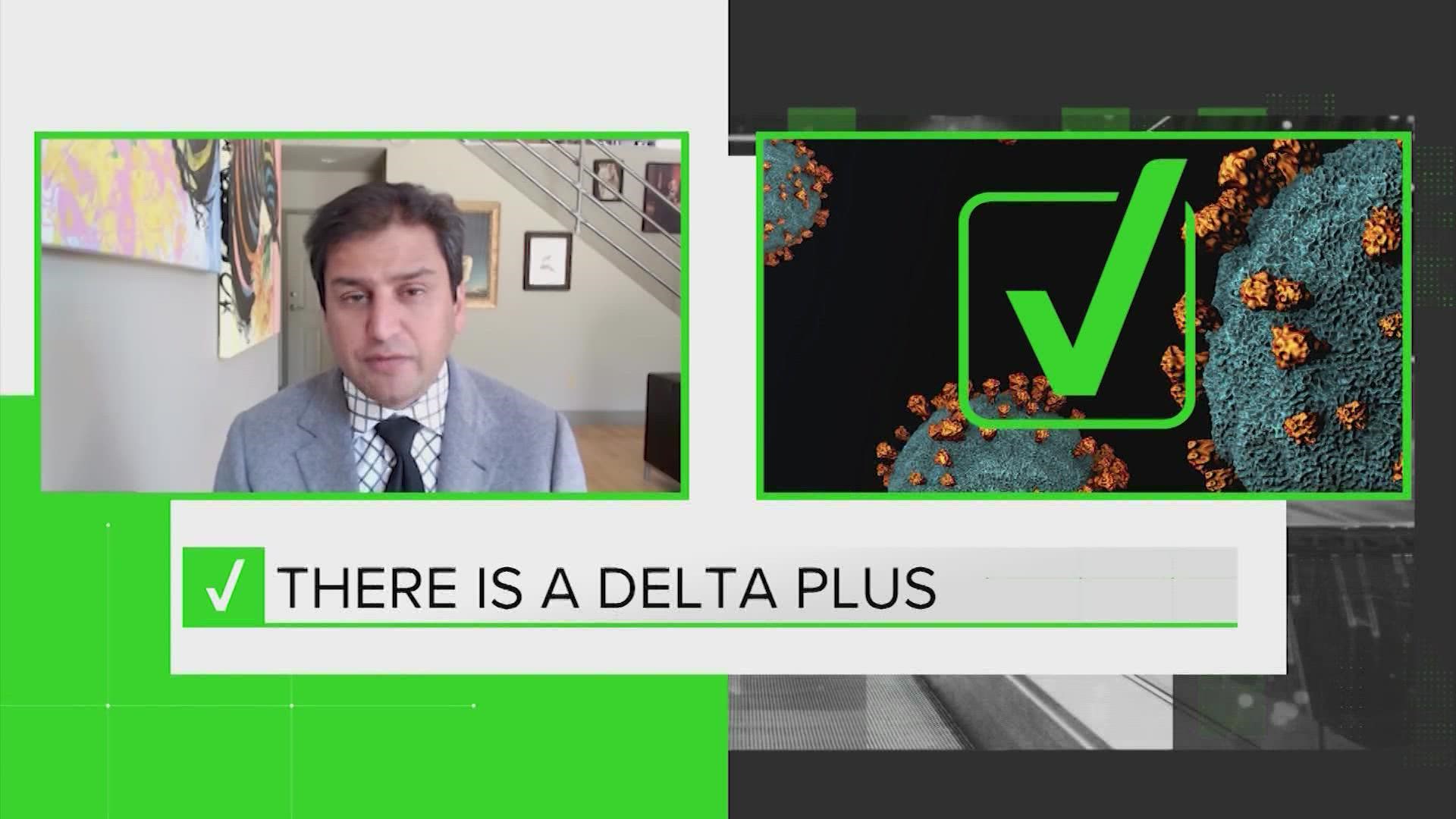 HOUSTON — The Verify team is working hard to separate fact from fiction while addressing viewers’ concerns about COVID-19, the vaccine and treatment options.

We took the submissions we received from viewers to Dr. Amesh Adalja, an infectious disease specialist at Johns Hopkins.

Claim: If you had COVID-19 over a year ago, you still have antibodies and do not need to get a vaccine.

False. Dr. Adalja said, “You do have antibodies after you've recovered from COVID-19 and you do have some protection, but what we know is that that protection may have decreased over time, especially as you approach one year, and you may be at risk for reinfection. Even just a single dose of vaccination will boost your immunity to a level that will be even higher than somebody who's been fully vaccinated. So, I recommend that people who have recovered get at least one dose of the vaccines to increase the immunity that they already have, especially if it's been several months to a year since your initial infection.”

Claim: There is a new strain of COVID-19 called Delta Plus.

True. Dr. Adalja said, “There are multiple different variants that are developing, that are circulating, that are evolving. One of those goes by the colloquial name of Delta Plus. It appears to be the Delta variant with some additional mutations in it. There's no reason to panic about it. However, it doesn't seem to be acting any differently than Delta. But you should expect that they're going to be more variants as this virus continues to evolve and continues to infect people.”

Claim: If a fully vaccinated person contracts the COVID Delta variant, that person will have an increased level of immunity due to the combination of the vaccine and their own natural antibodies.

True. Dr. Adaljah said, “When you get natural infection, whether that's on top of a vaccination, or whether that's before you've been vaccinated, it's going to create immunity. We find that people who are vaccinated and get infected have a very robust level of immunity, probably more than what either of those categories would have without the infection. So, natural infection does give you some immunity. It's best, though, to get infected after you've been vaccinated so that the that the price you pay for getting that natural immunity is something that's more predictable and is often mild.”

Claim: It is possible to get tested to find out if they had the original COVID-19, the Delta variant, or the Lambda variant.

False. Dr. Adalja said, “There's no way that we can clinically distinguish between these three types of strains. We do figure out what types of strains people had when we sequenced those viruses that are isolated from the people, the genetic material from their nose. But that's not something you can look in the past and do unless you've got those samples stored from way back when. But it's not something that's done routinely, and it doesn't change the treatment. So, it's very difficult for the individual to find out which version of the virus they were infected with. However, if you're getting infected now, in September of 2021, it's almost 100 percent sure to be the Delta variant of the virus.”

Claim: The Lambda variant of the COVID-19 virus is resistant to the vaccines that have been created so far.

False. Dr. Adalja said, “We're not seeing resistance when it comes to what matters, severe disease, hospitalization and death. There have been some early reports that the Lambda variant has some mutations that pose problems for the vaccines. But I think it's really important to remember that the vaccines were never designed to stop every infection. They were meant to stop serious infection. And when it comes to that, any of the variants that we've seen so far are really not a match for the vaccine on those important outcomes like hospitalization and death.”

Claim: The vaccines cause your body to make spiked proteins and those proteins are like the ones that make the COVID-19 virus. These spikes proteins may damage internal organs.

Claim: If someone waits six months to get their second dose of a two-dose vaccine, it is still effective.

True. Dr. Adalja said, “Even if you wait past the three-week or four-week window and get the get your second dose of the two shots, they're still going to be effective. In fact, there is evidence that they might be more effective. Some countries delayed this interval to 12 weeks, or even longer. There is some evidence that that second dose will increase your immunity even more if there's a bigger space. There was nothing magical about the three- and four-week intervals. That was what was used in the clinical trials. That's what led to the FDA approval. There are studies that that support the use of spacing those two shots out. So even if you've missed your second dose, if you've procrastinated, getting it whenever you can get it is going to give you the same benefit, maybe even more benefit than people who got it on time.”

Claim: If you've had COVID-19, recovered, and then get the vaccine, you'll have a stronger reaction to the vaccine.

True. Dr. Adalja said, “We find that people who already have pre-existing immunity from natural infection do tend to have stronger vaccine side effects, specifically after the first dose of the two-dose regimens. That's just the impact of the vaccine and the natural immunity that you have interacting. Those people are really, really strongly protected. The combination of natural immunity plus vaccine is probably the highest level of immunity we see.”

Claim. The antibody treatment Regeneron is made from fetal stem cells.

True. Dr. Adalja said, “It is the case that fetal cell lines were used in the testing and development of the Regeneron monoclonal antibody cocktail. But that's the norm for many, many drugs that people take every day. So, this is nothing different. Fetal cell lines are an important part of biotechnology, and they form an important basis for developing new drugs. Many people have taken drugs and vaccines that have been developed and fetal cell lines because that's the standard approach with certain technologies that are being used in the biopharmaceutical world.”

Claim: If I had COVID and had the transfusion, I can donate my antibodies.

False. Dr. Adalja said, “When you donate blood, you're often donating the red blood cells. The antibodies that you might have had from recovery are going to be a different component of the blood. Early on, there was an effort to collect what's called plasma from individuals for convalescent plasma transfusions that really hasn't been shown to be effective. But in your plasma, there are going to be antibodies directed against COVID-19, but they're not really in sufficient quantities or not really robust enough to be able to have a real major impact on people in the convalescent. Plasma data is very mixed on whether or not it was beneficial, but it was something that that had had its heyday early on in the pandemic. But now there are better ways to treat Covid-19 and we have synthetic antibodies like those made by Regeneron that that can be used for that same purpose.”

Claim: Zinc can help boost your immune system against COVID.

Unknown. Dr. Adalja said, “There's mixed evidence for this. I wouldn't say that this is something people should rely upon. I don't think it hurts people to take zinc lozenges. It may have some mild effect, but it's nothing definitive and it shouldn't delay your care. I think there's a lot more work to be understood about zinc and its ability to decrease symptoms from common cold causing viruses, of which Sars-Cov-2 is one.”

True. Dr. Adalja said, “There has been evidence that people who are Vitamin D deficient are more likely to be infected with COVID-19 and more likely to have severe COVID-19. In fact, the British government at one time made Vitamin D to many of its citizens to increase their levels. So, Vitamin D does play a critical role in your immune function and is something that people should think about as a as a general health measure, making sure they have normal Vitamin D levels to fend off not just COVID-19, but other respiratory illnesses as well as general, as well as improve their general health.”

Claim: If you received the Johnson & Johnson vaccine and you believe that it doesn't protect you well enough from the Delta variant, should you go get the Moderna or Pfizer vaccines to further protect yourself.

Claim: I should throw away my lipstick foundation sponges and makeup brushes after I recover from COVID-19.

False. Dr. Adalja said, “There's probably a little benefit from throwing away these types of materials, especially because you're the one using them. You shouldn't be sharing them to begin with, with other people. But if you're only using them for yourself, there's no reason to worry about that being an infection risk. Infection from these types of devices and these types of substances is very rare.”