VERIFY: No, COVID-19 is not impacting more meatpacking employees than health care workers

Based on the most recent available data -- no. But that doesn't mean the business is going unscathed in terms of infections. 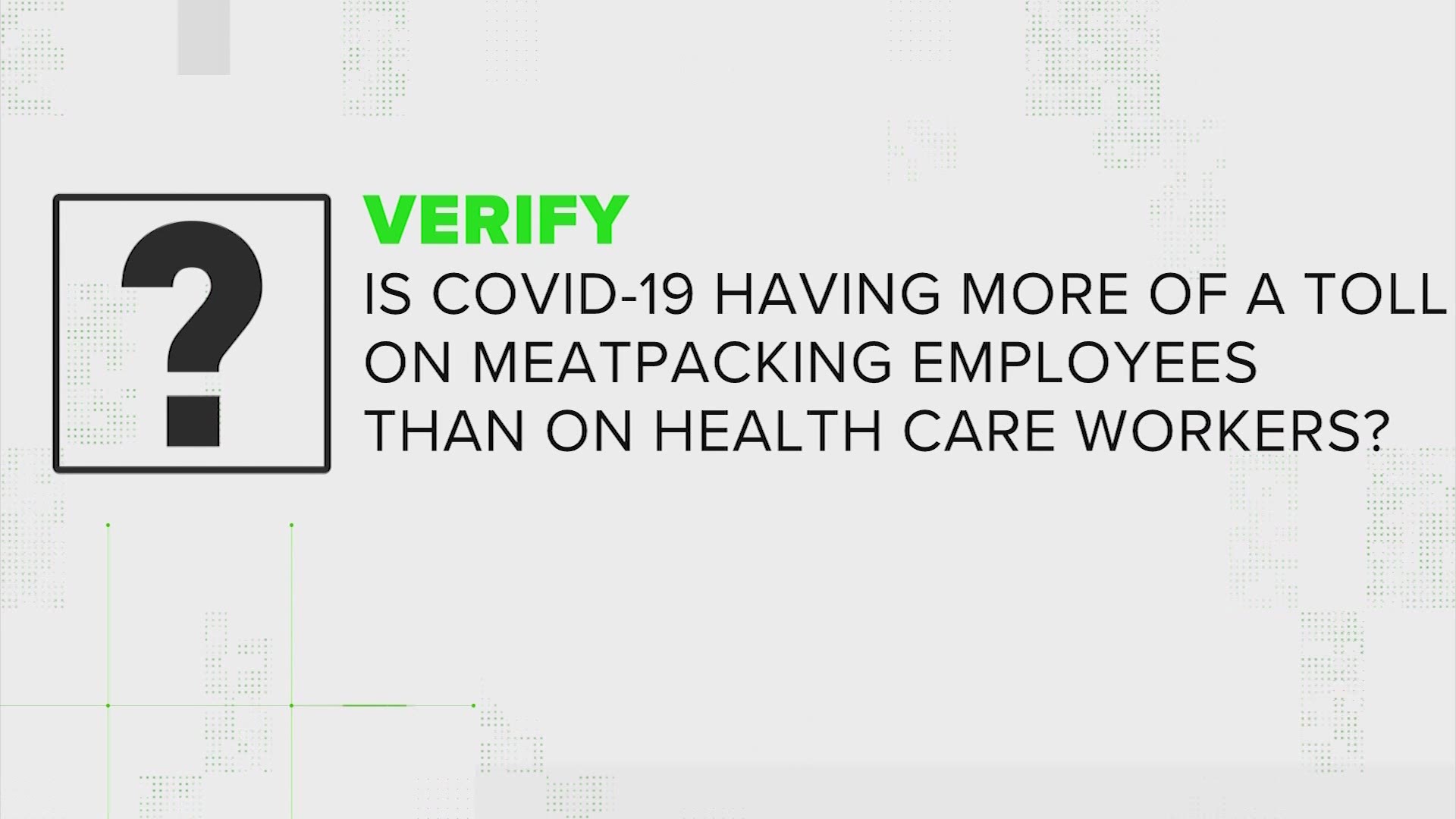 Is COVID-19 having more of a toll on meatpacking employees than on health care workers?

No, viral social media posts saying meatpacking employees are being infected more than health care workers is incorrect. But that doesn’t mean the industry is going unscathed.

The Centers for Disease Control and Prevention

The U.S. Department of Agriculture

Other reports, including TIME Magazine

The posts, which have been shared thousands of times, say a similar statement like, “Why is it. 5,000+ meatpackers tested positive, but not 5000+ nurses or doctors???”

So our team of researchers looked into a variety of sources to see if COVID-19 is having more of a toll on meatpacking employees than on health care workers.

According to a CDC report, as of April 17, more than 9,200 health care workers had been infected with COVID-19 and 27 have died. This is despite efforts to protect themselves, as noted by a TIME report in April detailing widespread shortages in PPE.

The CDC has also said these numbers are likely an undercount because only 16 percent of COVID-19 cases reported to the CDC included information on whether or not the patients were health care workers.

But that doesn’t mean the meatpacking industry is going unscathed.

Another CDC report from May 8 shows more than 4,900 workers across 115 facilities had been infected, and 20 had died. The agency cites, “difficulties with workplace physical distancing, hygiene, and crowded living and transportation conditions.”

However, after President Trump issued an executive order meant to maintain the supply chain, 14 meatpacking facilities opened back up. The Department of Agriculture applauded the move after working together with the CDC and other health officials to implement safe working conditions for employees.

Though, the UFCW International President still opposed the move, citing the need for more safety improvements.

Ultimately, we can verify – false. The social media posts saying meatpackers are being infected more than health care workers is incorrect.

Employees in both industries are being hit hard, but the most recent available data shows one impacted more than the other.

RELATED: VERIFY: Can you catch COVID-19 from a corpse?

RELATED: VERIFY: Can you be fired for refusing to return to work once your state reopens?