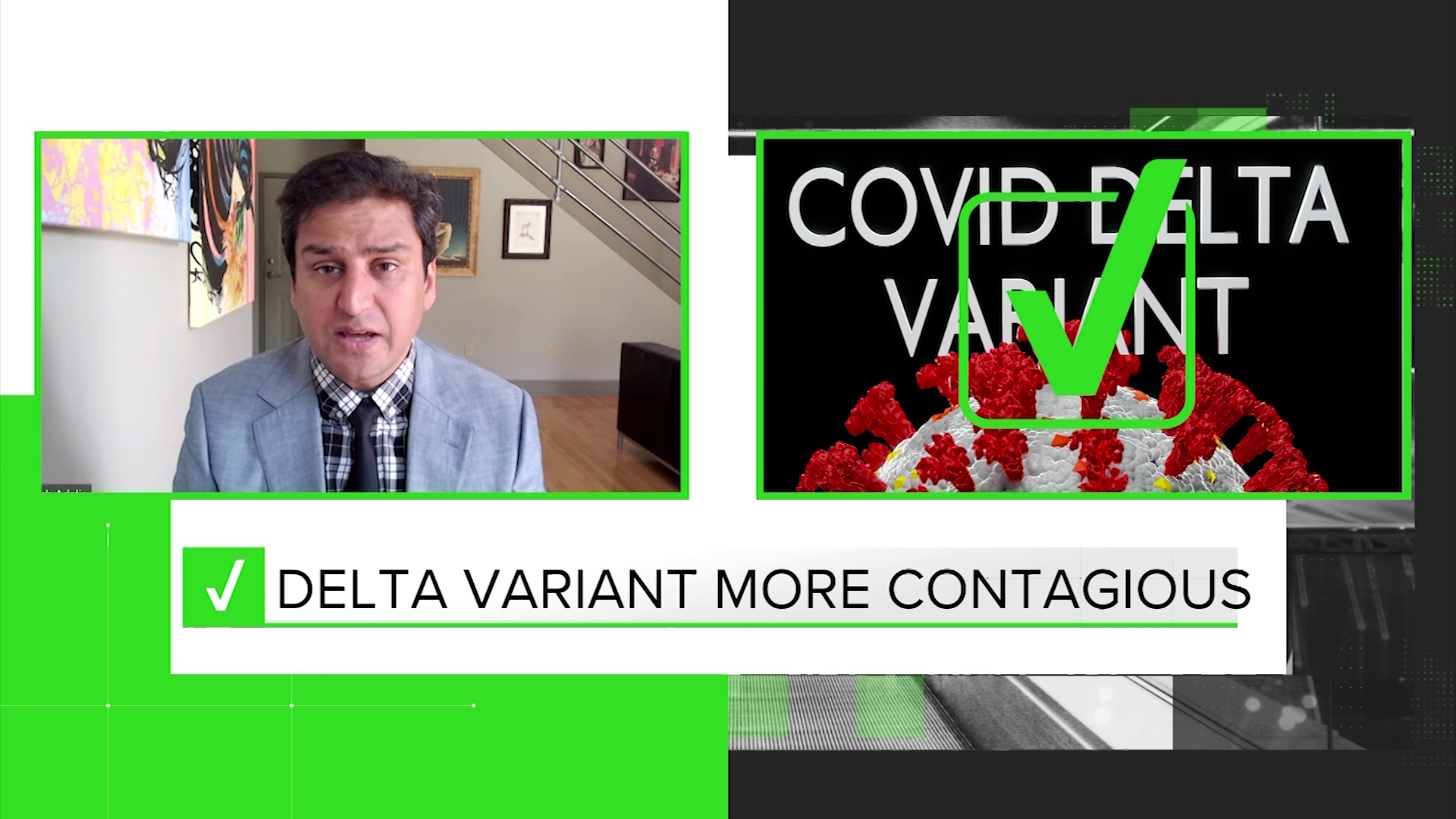 HOUSTON — The COVID-19 Delta variant has many people concerned as cases continue to climb. The VERIFY team is taking viewers' questions and concerns to the experts. Dr. Amesh Adalja, an infectious disease specialist at Johns Hopkins, addresses the following claims.

True. “The Delta variant was one of the Indian variants, and it was first detected in India and was responsible for their surge in cases that put their hospitals into crisis," Dr. Adalja said.

CLAIM: The Delta variant is more contagious than standard COVID-19.

True. “The Delta variant has a cluster of mutations that appears to make it the most fit version of the virus that we've seen. It does appear to transmit much more efficiently from person to person than the original version of this virus and the other variants that have arisen," Dr. Adalja said.

False. “It's unclear at this time whether or not this is a more deadly version of the virus. There have been some anecdotal reports of this, but nothing definitive about if it's affecting people differently or affecting people more severely than other versions of this virus," Dr. Adalja said.

CLAIM: The Delta variant can still make you sick even if you have been vaccinated.

False. “In general, when you are a fully vaccinated individual and you get a breakthrough infection, whether it's with the Delta variant or with some other variant or the original version of the virus, it's usually a clinically insignificant infection, meaning you probably have no symptoms at all," Dr. Adalja said. "Or if you do have symptoms, they're very mild. There are very rare cases where someone has been made sick by the Delta variant, but that's not the norm. It's exceedingly rare to see a breakthrough infection actually make somebody sick who's fully vaccinated.”

CLAIM: The Delta variant appears to be affecting younger people and making them sicker than the original COVID.

False. “The Delta variant is affecting infecting anybody that's not vaccinated, and it just so happens that our pockets of unvaccinated individuals are much more prevalent in younger individuals," Dr. Adalja said. "So the virus is just moving through the community looking for unvaccinated people. Unvaccinated people, they're more likely to be younger because they weren't prioritized for the vaccine. Many of them don't want the vaccine because they don't think they need it. So it's really an artifact of where the vaccination rates are the highest and lowest in the country.”

CLAIM: The symptoms are similar to those seen in the original coronavirus strain and other variants including cough, headaches, sore throat and fever.

True. “The Delta variant, causes pretty much the same constellation of symptoms. There have been some anecdotal reports that there is less of taste and smell disturbance, but that's not something definitive yet," Dr. Adalja said. "There really isn't much difference between them for all practical purposes. So if you've got cold or flu like symptoms, it's consistent with the Delta variant.”

CLAIM: An unvaccinated person who has had COVID has built up a strong resistance and is less likely to contract the Delta variant.

True. “But it also depends. We know that natural immunity is not nothing, that people who have prior infection do have some level of protection, especially against severe disease," Dr. Adalja said. "And we know that infections are pretty rare. They do occur, but pretty rare in general. They're more protected than somebody who hasn't been vaccinated or who has never had COVID-19. But the immunity may not be as robust. That's why we recommend, or at least I recommend, that people who had covered at least get one vaccine dose to boost their immunity.”

Unknown. “It depends," Dr. Adalja said. "Viruses are always going to be mutating, and whether or not they become more or less lethal has to do with how easy it is for them to transmit. If the virus is having no problem transmitting, it doesn't have any incentive or any selection pressure to change its lethality. So while it is true, over time the virus has become tamer, that has more to do with the fact that perhaps there's a vaccine, perhaps there's treatments, or perhaps they transmit more efficiently when they're tamer. But it's not always the case with the respiratory virus. You would expect some of its virulence might go away because they transmit more efficiently when people are not sick at home in bed. But this isn't something that you can say is an ironclad rule. It's a general principle. But there are exceptions to it, and it's something that will take some time to understand when it comes to Sars-Cov-2.”

CLAIM: The risk of the Delta variant is exaggerated.

False. “In the United States, we have less than half of the of the population fully vaccinated," Dr. Adalja said. "So that means that there's a tremendous amount of people that are susceptible to the variant and it is going to spread through the unvaccinated populations. While it is true that in places where vaccination rates are high, especially vaccination rates in high-risk individuals such as the elderly, the Delta variant will not be as much of a threat. There's enough of the country that doesn't have enough of their high-risk people vaccinated that it will still be a threat. The other issue with the Delta variant is that it's only a threat because of our own doing, because we have the solution in hand. So I don't think that you can say that this is exaggerated because we're hearing about hospitals having issues now, for example, in Missouri. The threat is something that needs to be announced because the solution is so simple. This should be the impetus for those people who have been vaccine hesitant to get a vaccine.”

CLAIM: The Johnson & Johnson vaccine is only around 60 percent effective against the Delta variant.

Unknown. “We have conflicting studies on the Johnson & Johnson vaccine," Dr. Adaljah said. "One, from the company that shows pretty robust immunity and another that was published on a preprint server that shows lower immunity. However, I would say that when it comes to what matters preventing severe disease, hospitalization and death from the Delta variant, the J&J vaccine stacks up just as well as the Moderna and Pfizer vaccines. We need more data on the vaccine and the Delta variant to be able to say anything definitive right now. I would be pretty confident if I had the J&J vaccine that I would be protected from the severe consequences of infection. And that's the whole reason why we vaccinated people, was not to prevent every case, but to prevent severe disease, hospitalization and death."

CLAIM: I got the Johnson & Johnson vaccine. I should get Moderna now because it's more effective on the Delta variant.

False. “We do not yet have data on whether or not boosters with a different type of vaccine are going to be necessary or needed," Dr. Adalja said. "Right now, there needs to be more study. The J&J vaccine does hold up when it comes to what matters, which is serious disease, hospitalization and death. We have not seen any kind of data showing that people who have gotten the Johnson & Johnson vaccine are more likely to have breakthrough infections with the Delta variant. That data is not available yet. Once that data is available, then I think we can move into a conversation about what might need to be done. But right now, I would I would sit tight if you got the Johnson & Johnson vaccine."

CLAIM: The Delta variant is so contagious, we will eventually get your herd immunity, even if many people don't get vaccinated.

Unknown. “It depends if you mean over time, or over 10 years," Dr. Adalja said. "Yes, everybody will probably get infected with the Delta variant because this is an efficiently spreading respiratory virus. But the point to be made is that if you get herd immunity, it's going to come at a major cost because there are enough high risk individuals who are not protected that will end up dying because of COVID-19, because they weren't protected. So the cost of getting herd immunity, the natural way with COVID-19 is very high and too high to bear, especially when we have a safe and effective vaccine that makes this a non-issue."

CLAIM: The expiration date of effectiveness on both of the two-dose vaccines is approaching, I should make an appointment to get the booster shot to protect myself against new COVID variants.

False. “There's no indication that we need booster shots for the general population to meet that threshold that would be fully vaccinated individuals having breakthrough infections that are landing them in the hospital," Dr. Adalja said. "That's just not happening to any with any high frequency. The expiration dates, that's what we're studying. We can do a shelf-life extension. Remember, there are continual new doses of these vaccines being produced. So, I would not worry about expiration dates at all.”

CLAIM: No virus has ever mutated to become more lethal than COVID-19.

Unknown. “It depends when you look at viral mutations," Dr. Adalja said. "For example, influenza has mutated to become more resistant to Tamiflu in certain strains. That makes it more deadly because it's harder to treat than HIV strains that have mutated to become resistant to certain antiretrovirals. That makes them harder to treat. Therefore, it makes them more deadly. So, I don't think that that's a statement that holds."