VERIFY: Donald Trump has raised $200 million since Election Day. Where does it go?

The president started an Election Defense Fund. That money can go to a number of different places. 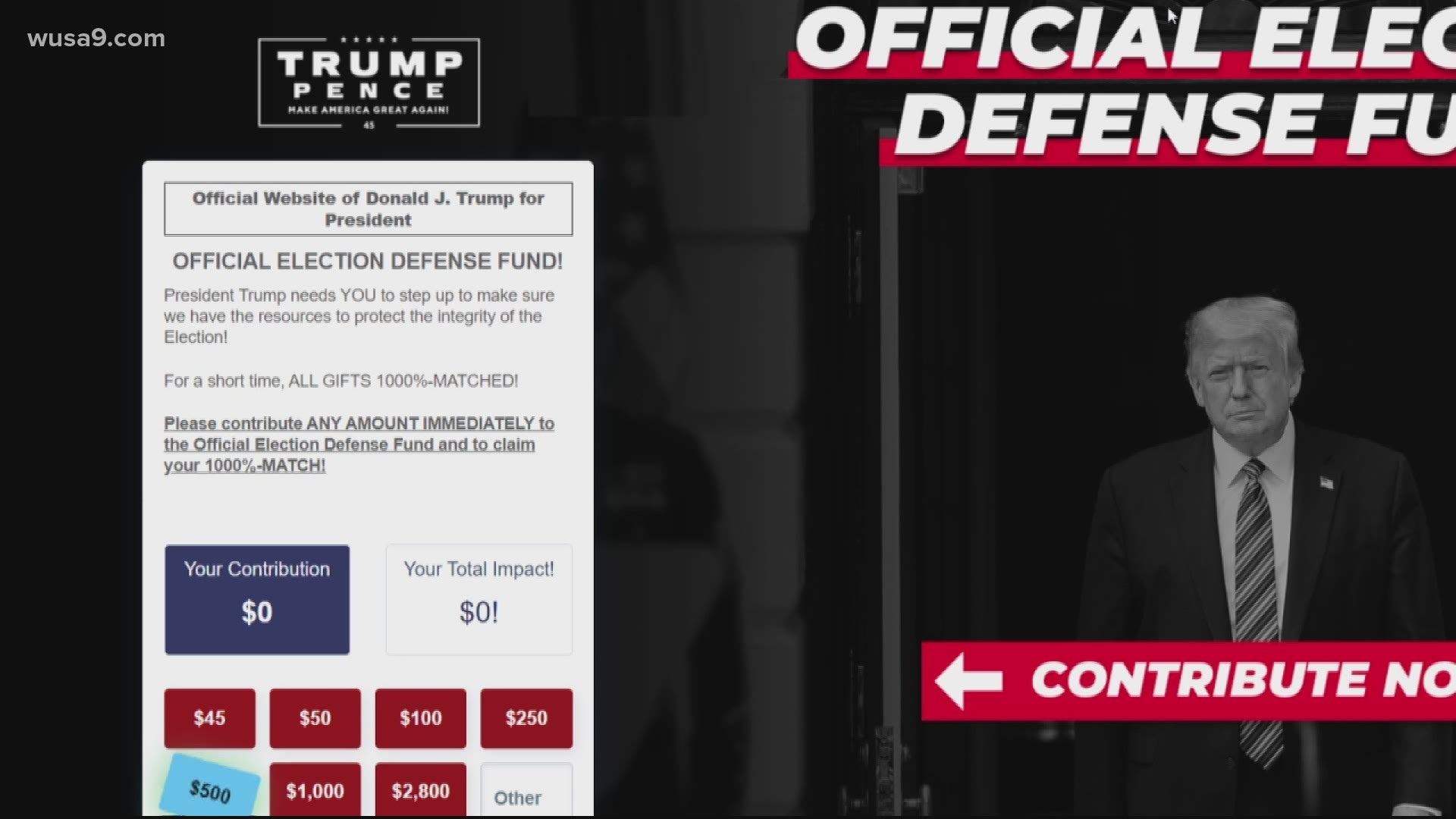 WASHINGTON — Despite the electoral college officially voting for Joe Biden this week, President Donald Trump still has not conceded the election.

The Trump for President campaign website is still fundraising, but for an Election Defense Fund.

Since Election Day, President Trump has raised more than $200 million. I took the campaign filings and the website to a campaign finance expert to find out what the president is spending that money on.

Where is the money that President Trump raised from his Election Defense Fund going?

It can be spent a number of ways. A fraction is going to election defense efforts.

Since November 3, the Donald J Trump for President website has had a link at the top to donate to the President’s Election Defense Fund. When you click on it, it goes to a fundraising page.

The fundraising prompt reads: “President Trump needs YOU to step up to make sure we have the resources to protect the integrity of the Election!” Underneath it gives different amounts to donate to the official Election Defense Fund.

“So since Election Day, Trump has been fundraising furiously asking for donations to support his post-election litigation and recount costs,” Brandon Fischer said.

“The fine print shows knows that the money is actually going elsewhere.”

It’s no secret. If you scroll to the bottom of the page, it tells you where the money raised is going.

Some did go to legal defense and recounts.

However, a week after the election also said the money was going to pay the Trump campaign’s 2020 election debt.

“Since then, 75% of every small donations, asking for money for the ‘Election Defense Fund’ has actually gone toward Trump's new leadership PAC,” Fischer explained.

That new leadership PAC (political action committee) is called ‘Save America.’ The money it takes in can be spent on a number of things according to Fischer.

It can even be used to pay “consulting fees” to private individuals including the president.

The website seems to advertise that president Trump is raising money for an “Election Defense Fund.” However, according to the fine print and Brandon Fischer, it’s going to post-election efforts, paying campaign debt, and a new political action committee.

The last campaign finance report from November 23 showed the Trump campaign owed $11 million on Election Day. Reports are the campaign has spent $14 million on legal costs and recounts.

That means there could still be more than $180 million left over from fundraising after the campaign and post-election costs are covered.