VERIFY: Viral push for a 28th amendment is based off misinformation

A viral message claims members of Congress don't hold themselves to the same laws they write. Only problem? It's filled with misinformation and false claims. 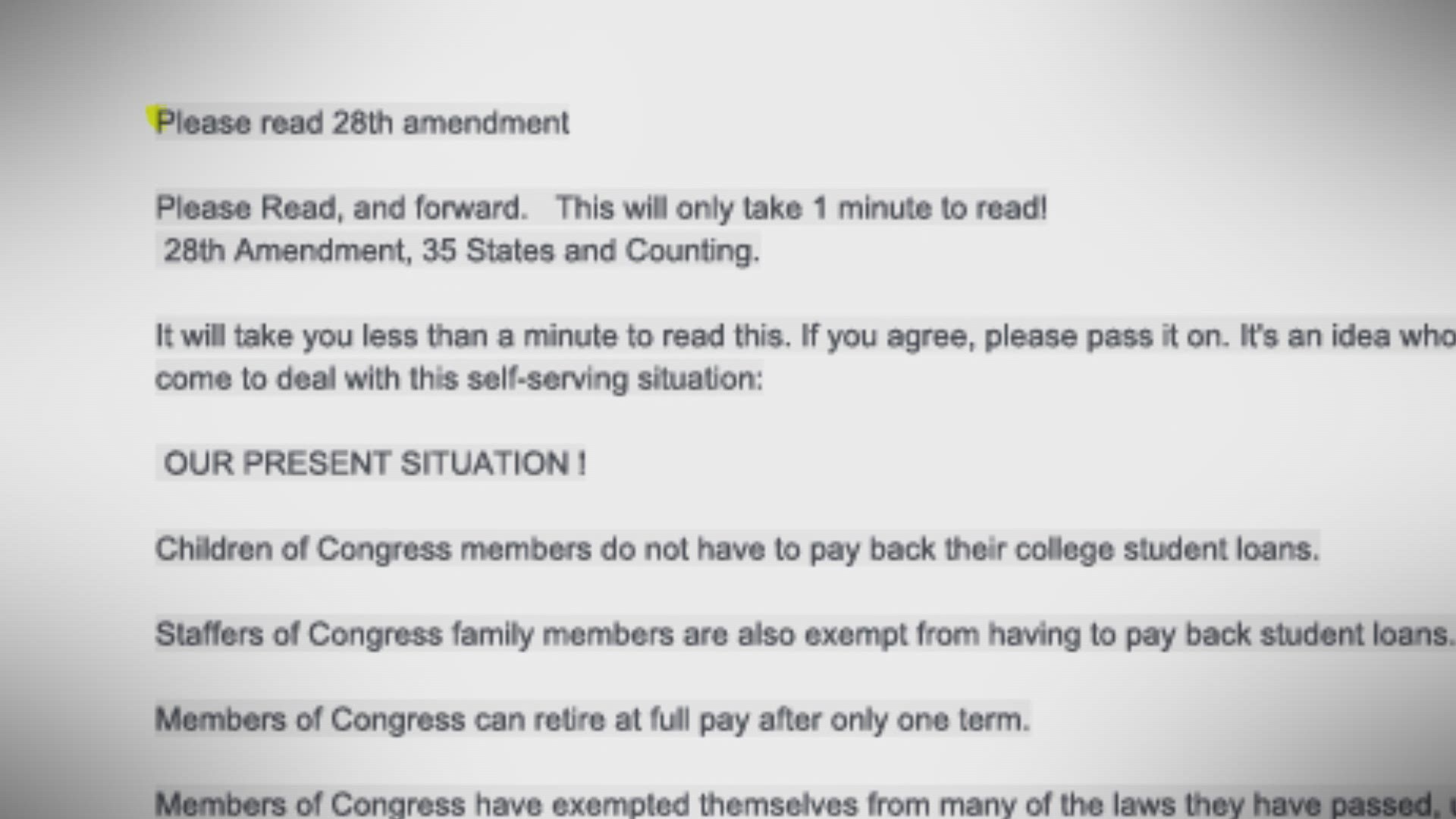 A viral “chain message” is making the rounds on social media, petitioning for a 28th amendment that will hold members of Congress accountable to the same laws as all other Americans.

It appears in different forms.

Here’s the full text making the rounds on Facebook.

So, are members of Congress really circumventing laws and acting outside of what they legislate to all Americans? How much of this is true?

The claim states that children and staffers of members of Congress are exempt from paying back their student loans.

While the claim likely stems from a real federal hiring practice, how it's being presented here is false.

Those in positions of “competitive civil service” cannot benefit from this plan, meaning those in Congress don't receive its benefits.

It’s also important to distinguish that this plan does not forgive anyone’s student loans. The agency pays off some of the debt to the loan holder.

So we can VERIFY that this claim is FALSE.

The amount of pension depends on the years of service and the average of the highest three years of salary for the lawmaker.

In addition, the starting amount of retirement pay for a member of Congress cannot exceed 80% of his or her salary while serving.

The Senate website also confirms that members of Congress have been required by law to contribute to Social Security since 1984.

So the petition's claims about retirement pay and social security are also FALSE.

Another false claim presented in the petition is that members of Congress are exempt from a number of laws, specifically those involving sexual harassment.

However, Section 201 of the Congressional Accountability Act  specifically prohibits members of Congress from discrimination or harassment of employees based on race, color, religion, sex, or national origin.

So this claim is FALSE.

The petition also claims members of Congress have exempted themselves from healthcare reform laws.

However, the text within the Affordable Care Act specifically requires Congress to participate.

This claim is FALSE.

At least one version of this petition insinuates Congress can give themselves pay raises and proposes that ability would be stripped by a 28th Amendment.

However, a sitting member of Congress can't give themselves pay raises. That was laid out by the 27th Amendment, the most recent amendment to the Constitution.

The 27th Amendment made it so if members of Congress vote to give legislators a pay raise, it does not take effect until after the election of a new Congress.

Therefore, the only way a member of Congress can vote to give themselves a pay raise is if they win the next election even after voting for such a measure.

This claim is MOSTLY FALSE.

The petition also claims that currently 35 states have filed lawsuits against the federal government for imposing unlawful burdens on their states and 38 states are needed to call for a Constitutional Convention.

According to Article V of the Constitution, two-thirds of states need to call for a Constitutional Convention for one to occur. That’s 34 states.

Therefore, if 35 states had already agreed to one it would be set into motion without needing any more states to sign on.

This claim is FALSE.

However, 38 states wasn’t a number pulled out of the blue. The other way to ratify a new amendment requires the support of two-thirds of both chambers of Congress and three-fourths of the states. That’s likely how they wound up on 38 states.

What Else We Found

These claims have been floating around the internet for awhile. In fact, you can find it popping up for almost a decade.

And if the issues were real, it’s highly unlikely there would be no evident progress and no news coverage on it during the last nine years.