Teen who survived shark attack honored by City of Encinitas

A local teen attacked by a shark and the heroes who helped save his life were given a big honor in Encinitas. 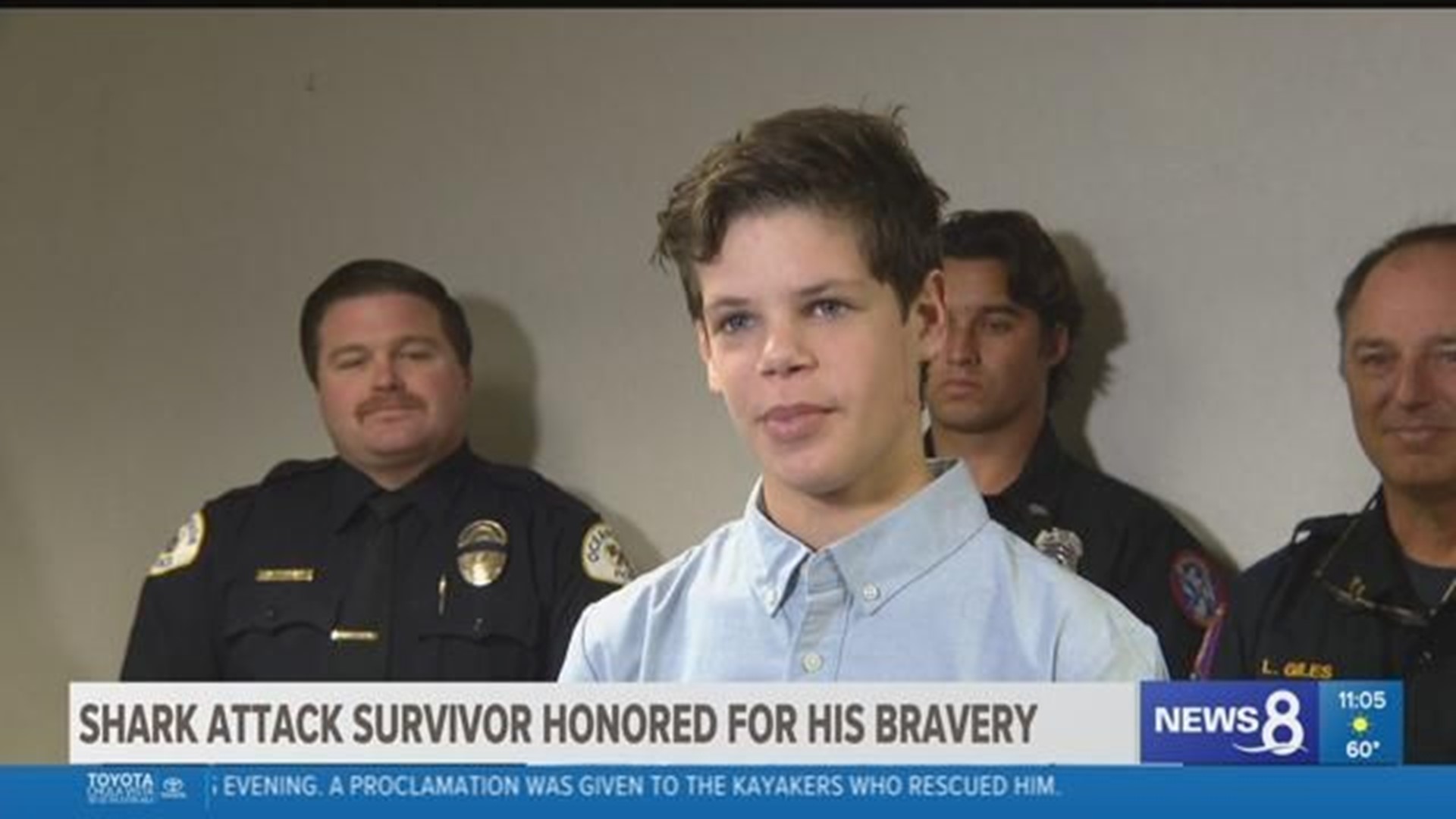 ENCINITAS (NEWS 8) — A local teen attacked by a shark and the heroes who helped save his life were given a big honor in Encinitas.

The City of Encinitas presented 13-year-old Keane Hayes with a certificate of bravery during a ceremony Wednesday evening. And a proclamation was given to the kayakers who rescued him.

After being given the award, Keane spoke about his experience and said that at first when he was bitten he thought it was his diving buddy Noah playing a trick on him and trying to scare him.

"But when I came back up, my mask was off and I saw that there was blood in the water; my wetsuit was ripped and I thought, ‘It's not Noah,” he said.

Able to laugh about it now, Keane recalled the terrifying first moments when he realized he'd been attacked by a shark while lobster diving off Beacon's Beach in Encinitas in late September.

“After I was bit, I was kind of confused,” said Keane.

RELATED: Fundraiser held for teen bitten by shark in Encinitas

But the North County teen's training as a junior lifeguard kicked in as he made the remarkable - and potentially life-saving decision - not to swim to shore.

He chose to swim instead in the opposite direction toward a kayak where three other divers -- and good Samaritans - helped save him, getting him safely to shore and to first aid.

Wednesday night, those heroes: boat owner Chad Hammel, Oceanside Police Officer Matthew Ephron and off-duty lifeguard Andrew Helble, were honored for their quick thinking and bravery - along with Keane himself - by the mayor of Encinitas.

"These are really the best qualities of human nature, when somebody is willing to selflessly help another, even at their own personal risk,” said Mayor Catherine Blakespear.

A selfless act of courage that Officer Ephron - who was in the water with Keane even as the great white shark was also nearby - tried to downplay.

"Right place, right time - that's all it was,” said Ephron.

“They are like family. They save my life,” said Keane. “They mean a lot.”

And while he hasn't gone in yet, Keane says this won't keep him from getting back in the water.

However, he did say this about where he would go:

While Keane continues to recover, his family's medical bills continue to rise. Click here if you would like to donate to a GoFundMe page to help them.