HISD Board President Rhonda Skillern-Jones says she doesn't expect any notices to be sent until after Spring Break, which is next week in the school district. 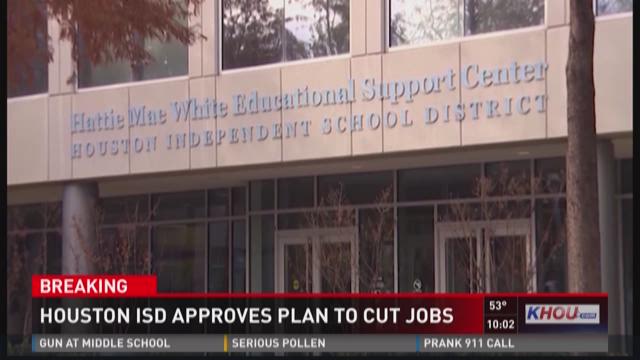 Houston Independent School District’s Board of Education approved a reduction in force Thursday night as they battle a $115 million budget shortfall.

Zeph Capo, President of the Houston Federation of Teachers, says those layoff notices could start being issued as early as Friday.

HISD Board President Rhonda Skillern-Jones says she doesn't expect any notices to be sent until after Spring Break, which is next week in the school district.

The union says its impossible to know what the final number will be until June. Capo hopes principals hold off until they get a better idea of their budget situation.

"They could start tomorrow issuing layoff notices," said Capo. "The ones that start issuing notices tomorrow will be a red flag for us that they're the ones who don't know what they're doing. As a trustee said tonight, we really haven't given the principals good data to understand what their budget is going to look like."

"I've said to my parents that come to me to ask for meetings, it would be helpful if you could tell me where to cut, because there will not be a scenario where there aren't any cuts," said Skillern-Jones.

During the meeting, HISD’s board did not give an update on their search for a new superintendent after Richard Carranza announced earlier this week he’s heading to New York City to lead their public schools.

Carranza was not at the board meeting at the request of board members. They said they did not want him to be a distraction with the pressing issues they're facing. No decisions have been made about his replacement or the process.

The board said they will meet again on March 22, 2018 and have more on the search for a new superintendent then.

Thursday afternoon, Capo told KHOU 11 News he’s urging the board to make cuts in the administration, not the classroom, while urging teachers to stay the course.

“Though there may be six (hundred) to 700 teachers laid off over the next month or two, we know that we routinely have to hire in the ballpark of 2,000 teachers a year due to regular resignations, retirements, and other reasons,” said Capo.

Capo says the union’s already pushed the district to lower the financial blow from $90 million in direct cuts to schools down to $45 million.

He says he’ll continue to fight for even fewer cuts ahead of the final budget vote in June.

District staff members say the so-called “critical shortage” employees would be spared, though they could be reassigned.

That includes, but is not limited to, middle and high school math, science, and English, bilingual education, ESL, and some special education teachers.

District officials say some campuses will lose staff, while others will grow.

An hour before Thursday’s meeting, several HISD parents and their children gathered outside HISD headquarters holding signs, chanting, and demanding an in-depth performance audit of HISD by state lawmakers.

“We don’t know how much they’re spending on some of these testing programs they’re using in schools, how many teachers that would represent, how small our class sizes could be if we weren’t spending money on that,” said Heather Golden, a mother of a fifth and sixth-grader at Frank Black Middle School. “We need them to open the books. We want to know what’s going on. They haven’t been opened since 1995.”

Golden said she and other HISD parents want the state’s Legislative Budget Board to handle the audit, both because of what they call an “incredibly thorough” protocol and because taxpayers are their clients.

“My recommendation is to pause, provide a breather, hold up on the accountability measures for now, but at the same time allow people like myself, the business community, and others to join with HISD and the board to address the situation and move to turn the situation around,” said Turner.

The mayor said he’s urging state leaders to consider Hurricane Harvey’s continuing impact on the district and its students.

“What we do not need to do is add more trauma and stress to them at this time,” said Turner. “You cannot divorce Houston from Harvey.”

The District continues to receive awards from the Texas Comptroller’s Office for effective and efficient financial management. We strive for fiscal responsibility, transparency, and accountability with every taxpayer dollar."