At the same time a group came together to protest downtown, Jean's family joined community members in prayer at a local church. 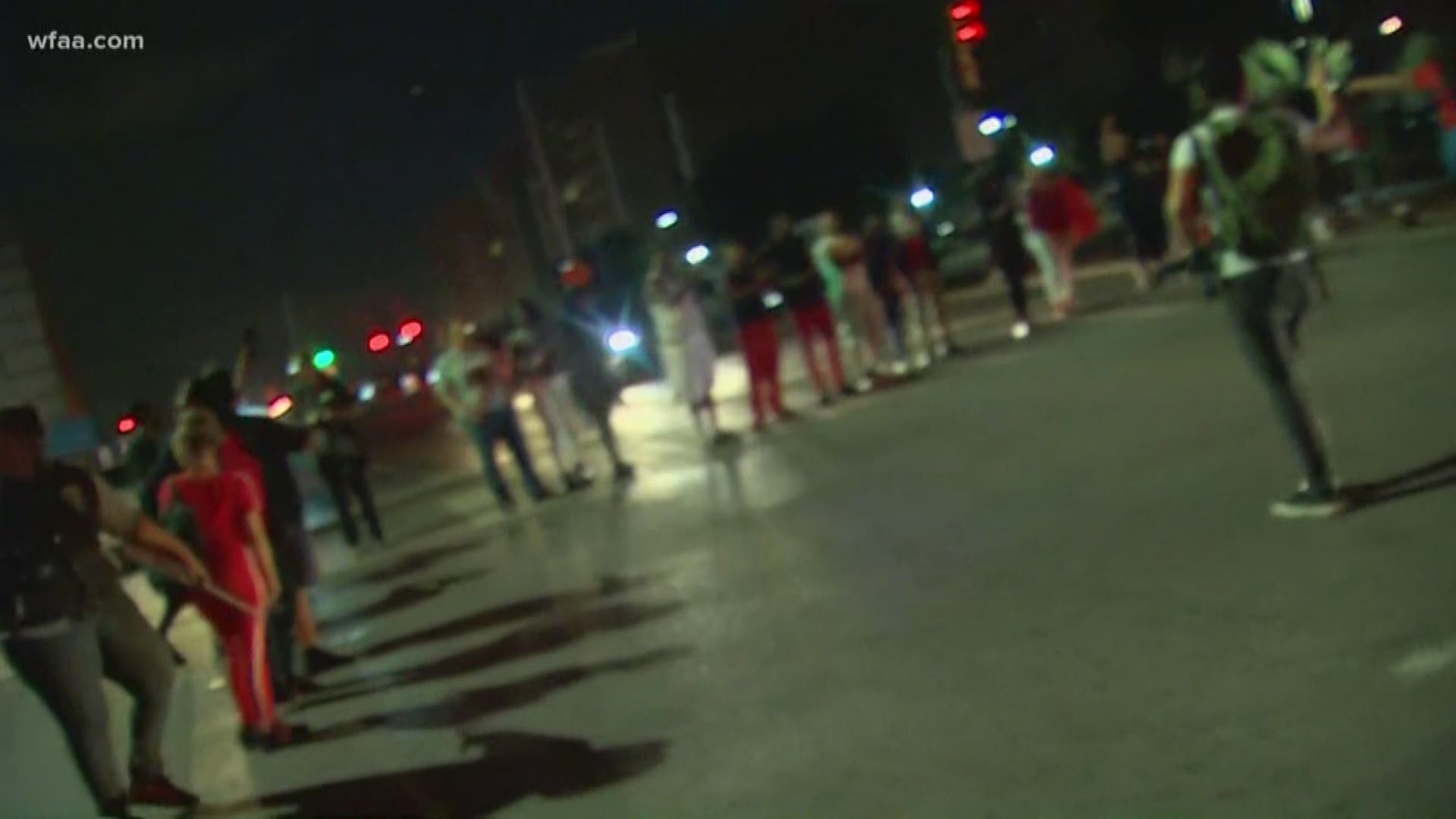 DALLAS — Hours after a jury handed down a verdict of 10 years in prison to Amber Guyger for murdering Botham Jean, two very different reactions took place in Dallas.

While one group came together to protest downtown, Jean's family joined with community members in prayer at a local church.

Activists and protesters gathered around 6:30 p.m. at the Frank Crowley Courts building where Guyger was sentenced, ready to protest the sentence in a "movement for justice."

“I feel like we have a dog bite with the murder conviction, but the dog has no teeth," Dr. Frederick Haynes said of Guyger's 10-year sentence.

The crowd started off by marching and then blocking the intersection of Commerce Street and Riverfront Boulevard downtown. They then moved to march toward the West End and to Dealey Plaza and the Omni Hotel, chanting "No justice! No peace!"

“We are marching tonight, we are marching in the streets (of Dallas) tonight. So I hope your feet, your legs, your everything is ready tonight," Alexander said.

One person was arrested at the protest late Wednesday night.

Safiya Paul, 31, was held on a $500 bond after she was arrested for obstructing a highway passageway, according to Dallas County records.

She was seen leaving the Dallas County jail Thursday morning.

Meanwhile, at the same time the protests were occurring, the family of Botham Jean were at the Dallas West Church of Christ, speaking at a prayer service for their son.

Bertrum Jean, Botham's father, said that his other son Brandt's expression of faith and forgiveness toward Amber Guyger in court Wednesday did not surprise him.

Brandt told Guyger he forgave her, and he believed God would as well.

"If you truly are sorry, I know I can speak for myself, I forgive you. I know if you go to God and ask him, he will forgive you," he said.

He then asked for permission to hug Guyger, a request that was granted by Judge Tammy Kemp before Kemp herself gave Guyger a hug and her own Bible to read in prison.

Botham's mother Allison Jean also spoke at the prayer service. She said that forgiveness as Christians is healing, but there are consequences for actions and the suffering her family has felt must not go unnoticed.

"That 10 years in prison is 10 years for her reflection and for her to change her life," she said.

"There's much more that needs to be done by the city of Dallas," she said to a crowd of "amens." "The corruption that we saw during this process must stop."

"Because after now, I leave Dallas," she said. "But you live in Dallas, and it must stop for everyone."

Jean also said that had Guyger been given proper training and used it correctly, her son would still be alive.

"He was no threat to her," she said. "He had no reason to pose a threat because he was in his own apartment."

"There's gotta be a better day, and that better day starts with each and every one of us," Jean continued.

Wednesday night at the prayer service, Allison Jean said that whether she had found it in herself to forgive Guyger is between her and God. "God knows my heart," she said.

"Warnings were given and police response teams were called to the scene. Eventually, they cleared the roadway and began to march through the streets in downtown Dallas. Due to safety concerns, the protesters were warned several times to clear the roadway. Protesters eventually marched back to Frank Crowley Courthouse at approximately 10:00 pm. One individual was arrested and charged with Pedestrian in the Roadway and Fail to ID."