On Thursday the Freedom from Religion Foundation filed a complaint with the Texas State Commission on Judicial Conduct for the actions of Judge Tammy Kemp. 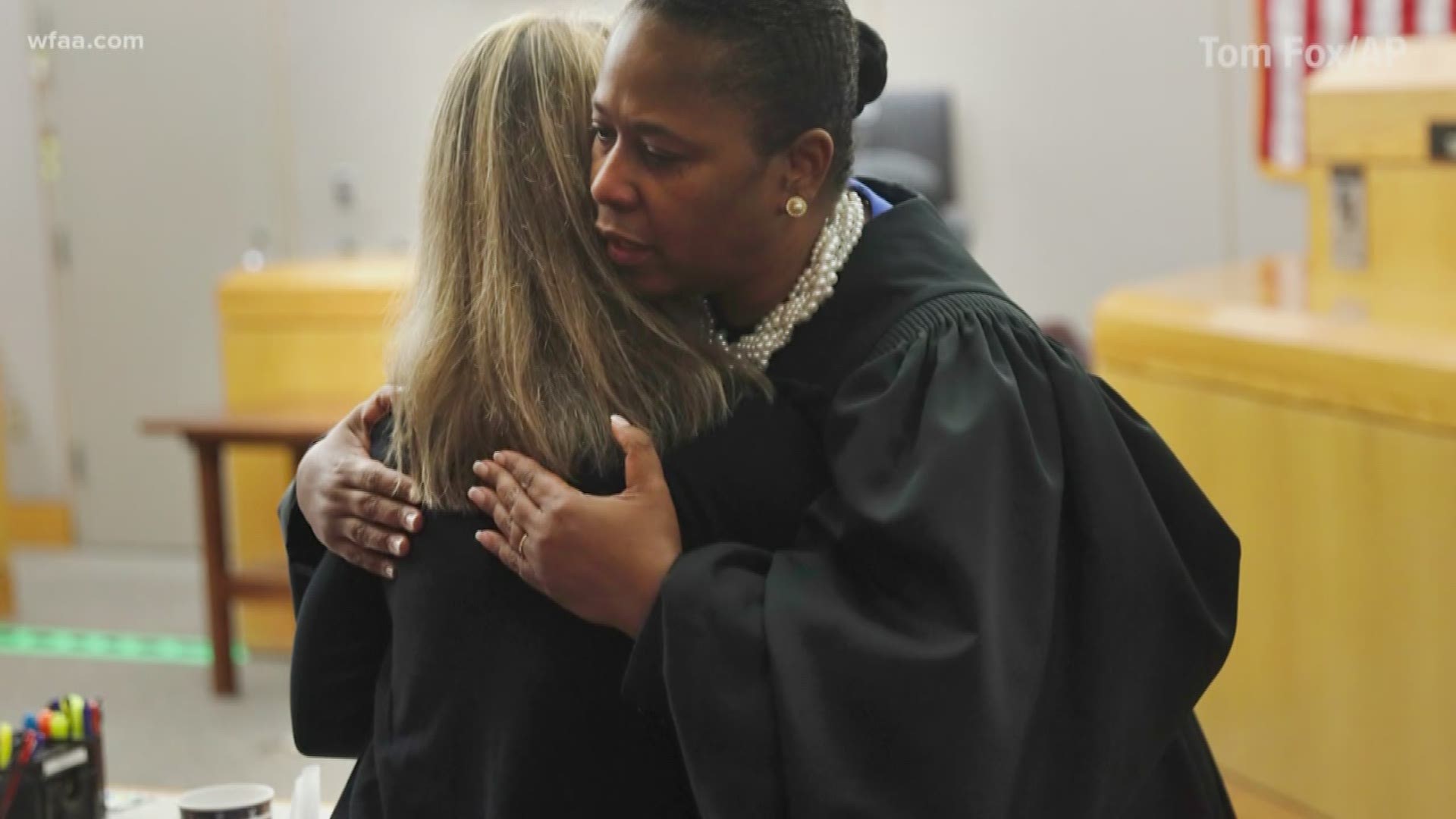 DALLAS — Pastors at churches across the United States say they will use the image of the hug between convicted murderer Amber Guyger and the little brother of her victim as an object lesson in love and forgiveness during services this weekend.

But the second hug, between the fired police officer and the judge who presided over her trial, has not been so widely admired.

The hug between Brandt Jean and Guyger was a stunning moment. It brought people in the courtroom to tears.

And by Thursday morning, WFAA received several inquiries from churches for access to the video to be used as an example in future sermons.

"I found it stunning and extraordinary," said Cuyahoga Valley lead pastor Chad Allen. "We need more of those types of examples in this world today."

His planned Sunday sermon is on the New Testament message to "love your enemy." He says he'd never seen such an obvious display of that as he did when Brandt Jean asked to hug Guyger and forgive her.

"And so what a great demonstration of God's love at work in his life. And he's passing it on to someone with desperate great need."

But there is not universal love for the second hug.

Thursday the Freedom from Religion Foundation filed a complaint with the Texas State Commission on Judicial Conduct for the actions of Judge Tammy Kemp.

She also embraced Guyger and gave her one of her personal Bibles, telling her that's where she should start her search for forgiveness.

RELATED: 'You start with this': Judge Tammy Kemp gives Amber Guyger a Bible after sentencing

FFRF called the judge's actions "inappropriate and unconstitutional" and that her "compassion crossed the line into coercion" and that "delivering Bibles, Bible studies and personal witness as a judge is an abuse of power.

Government employees may not use the power and privilege of their offices to preach their personal religious beliefs."

But the First Liberty Institute countered with its own statement in praise of Judge Kemp.

"FFRF is protesting Judge Kemp rather than joining the rest of the nation celebrating the compassion and mercy Judge Kemp demonstrated," Hiram Sasser, the general counsel with First Liberty Institute said in a written statement. "We should all be thankful the law allows Judge Kemp's actions and we stand with her and will gladly lead the charge in defending her noble and legal actions."

But in churches this weekend, the first hug will be lesson shared with congregations everywhere.

"It doesn't take away the pain. Doesn't make up for the pain," Pastor Allen said. "But it's a bit of good in the midst of the pain."

A bit of good in the tragic death of Botham Jean, a man of faith, still impacting the faithful everywhere because a little brother is following his lead.