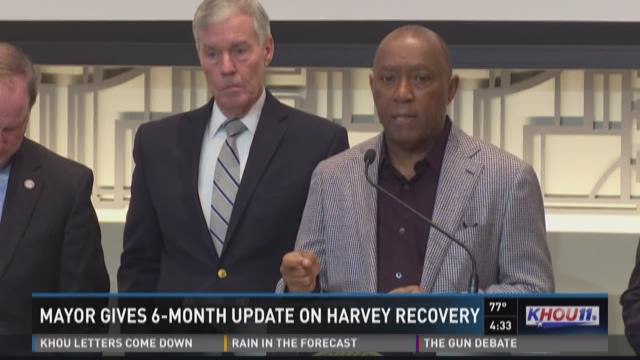 Houston Mayor Sylvester Turner laid out what's been done and needs to be done in the nearly six months since Hurricane Harvey.

The mayor singled out the city’s collection of its entire $100 million insurance policy, receiving 8,897 Harvey-related repair permitting applications, opening 12 neighborhood restoration centers, and temporarily allowing Harvey victims to have RVs and mobile homes on their property while they make repairs.

Turner also says the joint city-county Hurricane Harvey Relief Fund is about to give out the fourth round of help from the $112 million raised from 125,000 donors.

However, Turner also says 3,422 families are still living in hotels.

“The damage is behind the walls,” he said. “We still have thousands of individuals who are living in homes that need repairing - yesterday."

Turner says the only federal repair dollars they currently have are $424 million from FEMA for direct home repair programs.

He says it could be summer until Houston gets its chunk of the $5 billion HUD approved, and even later from the $90 billion in Congressional disaster aid.

"We don't know of that 90 billion how much of that will be coming to Texas,” said Turner. "They did change the formula so that more of those dollars would be coming to the state of Texas. My hope is that what we don't get from that 90 billion, the governor will tap the Rainy Day Fund.

Turner also announced the launch of a new volunteer campaign called Houston Still Needs You. It pairs volunteers with relief agencies in need.

City officials are also hoping those volunteer hours can substitute for dollars in the 10 percent share the city pays on projects involving federal disaster grants.

"If we have 2-3 billion worth of damage, that's 200-300 million dollars,” said Marvin Odom, Chief Recovery Officer after Harvey. “That's an enormous burden."

Odom says the city is aiming to repair 500 homes through FEMA programs by June.

On March 21, they're set to vote on tougher building rules for new homes.

Go to https://t.co/N9qLatWZCH to join "Houston Still Needs You." Our goal is to get 2 million volunteer hours in the next year; the hours give us a credit from @FEMA for our financial share of the recovery! #HurricaneHarvey

But we must always remembers that there is an urgent need for faster recovery inside peoples' homes. We still need federal departments to respond faster. #HoustonStrong