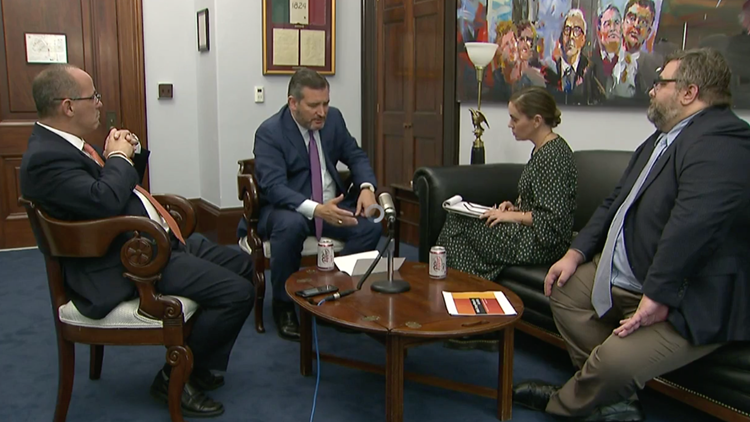 WASHINGTON — What started as a Twitter discussion turned into a Facebook livestream about the Second Amendment and gun legislation in the United States, as Sen. Ted Cruz and actor Alyssa Milano met in Washington D.C. Tuesday.

The debate comes less than a month after two mass shootings in Cruz's home state of Texas — one in El Paso that left 22 dead and another in the Odessa-Midland area that resulted in seven deaths.

While both parties had disagreed significantly in their online interactions, they also pointed to the importance of respect and civil discussion ahead of their in-person meeting.

Ahead of the debate, Milano wrote of the importance of "mutual respect & humility ... to effect positive change," while Cruz said "positive, civil discussion ...would go a long way to helping unite and heal our divided Nation."

The discussion took place Tuesday afternoon, but was sparked by a tweet Milano sent on Sept. 1, asking for someone to cite a passage from the Bible that states gun ownership is a "god-given right."

Cruz responded with a 10-part tweet thread, outlining his argument.

He pointed specifically to Exodus 22:2 as recognizing the right to self-defense.

Cruz went on to give examples of people who have defended themselves and their loved ones through that right.

Milano responded to Cruz saying she would love to meet with him to discuss many issues, including "life, liberty and the pursuit of happiness."

She also cited 1 Peter 4:8 (NIV), which reads, "Above all, love each other deeply, because love covers over a multitude of sins."

"I’ll be in DC next week. We can live-stream the meeting so the American people can hear your bull*** 1st hand," Milano added in her tweet.