"We don’t get paid to do this job. At the end of the day, I think I net $2.69 a month," the speaker said just two weeks into his new position. 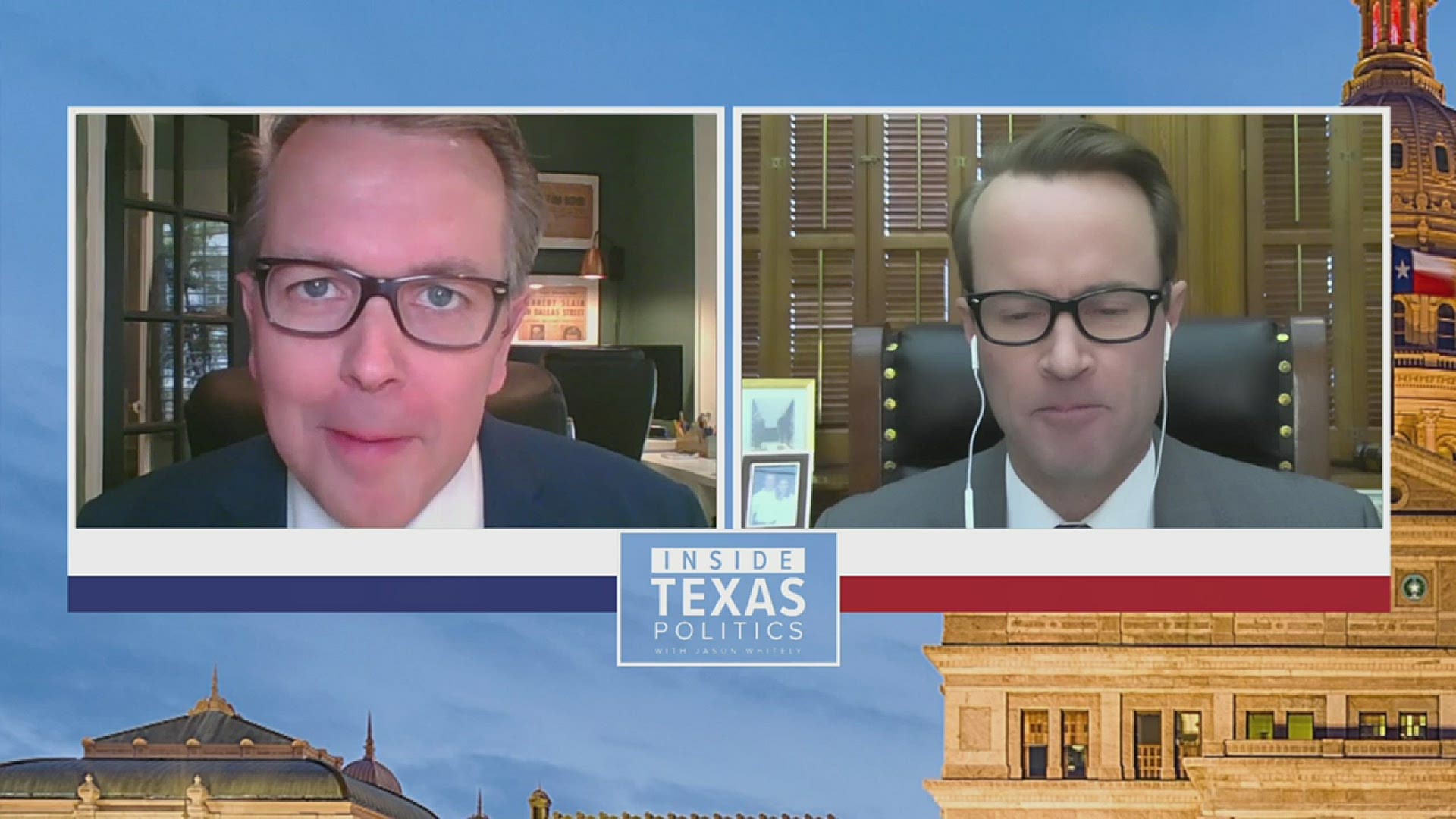 DALLAS — Two weeks into his new position, Texas House Speaker Dade Phelan appears to be a refreshing restart in this chamber during a time of political volatility.

"I want people to know I’m an honest broker and an average guy who’s had the distinct honor of being the speaker of the House of Representatives here in Texas," said Phelan.

Phelan, 45, a calm, thoughtful person, used a respectful tone when explaining his positions. The Republican from Beaumont won the top job in the House with the support of every Democrat.

Speaker Phelan spoke in a wide-ranging interview on Sunday’s Inside Texas Politics.

How the House’s base budget fully funds public education:

"There are some agency reductions throughout the budget where we cut spending. We do have some federal dollars through the CARES Act, as well. At some point, both chambers will have to decide if we want to use the Rainy Day Fund – the ESF [Economic Stabilization Fund] fund – which is over $11B, as well. It’s a very conservative budget. It’s something I think Texans will be proud of."

What will the most controversial bills be this session:

"The budget will be controversial, especially when we reduce spending some people will have a problem with that. Of course, redistricting is another area that’s very controversial. It’s very personal. You have congressional, state House, state Senate and state Board of Education. Those lines shift as the population shifts. And how we respond to COVID-19."

What kind of police reform ideas could Speaker Phelan get behind:

"There’s a lot of ideas out there from a lot of different members… it’s going to be a very big topic this session, there’s no doubt about it. I have not had an opportunity to go through – there are dozens of bills filed on this topic. I think there will be plenty of great ideas to make it to the House floor and if they have 76 votes they’ll go over to the Senate."

What kind of election reform has a chance of getting passed:

"There were some irregularities, in my opinion, in certain counties this last cycle – just mailing out ballots and kind of creating your own election statutes on a whim. That’s something we definitely need to address. That’s something that will come to the House floor, as well."

Criticism from the far-right wing of the Republican Party of Texas:

Why Speaker Phelan disagrees with President Biden canceling the northern expansion of the Keystone pipeline:

"Whether you agree or disagree on the use of fossil fuels, nothing is safer than a pipeline in transporting that product. We want to get it off the roads, get it off trains. The pipeline already exists in Texas. It’s already there. We’d just like to see it completed all the way through to where we can use those resources to create jobs in southeast Texas. We just want to be energy independent, as well. We’re finally energy independent," Phelan said.

Why Speaker Phelan doesn’t take himself too seriously:

“This is an important job. I’m not going to make light of that. But at the same time, you can’t take yourself too seriously. You have to realize there have been 75 speakers before me and there will be 75 or more after me. I’m just one person holding this job for one moment in time. You’ve gotta enjoy it while you can. We don’t get paid to do this job. At the end of the day, I think I net $2.69 a month. We’re all doing it for the right reason. We do it because we truly care about our community.”