In push for new Texas voting restrictions, House panel sets up GOP faceoff over which chamber's legislation will advance

The House elections committee gutted the Senate’s priority voting bill and replaced it with language from the House’s preferred legislation. 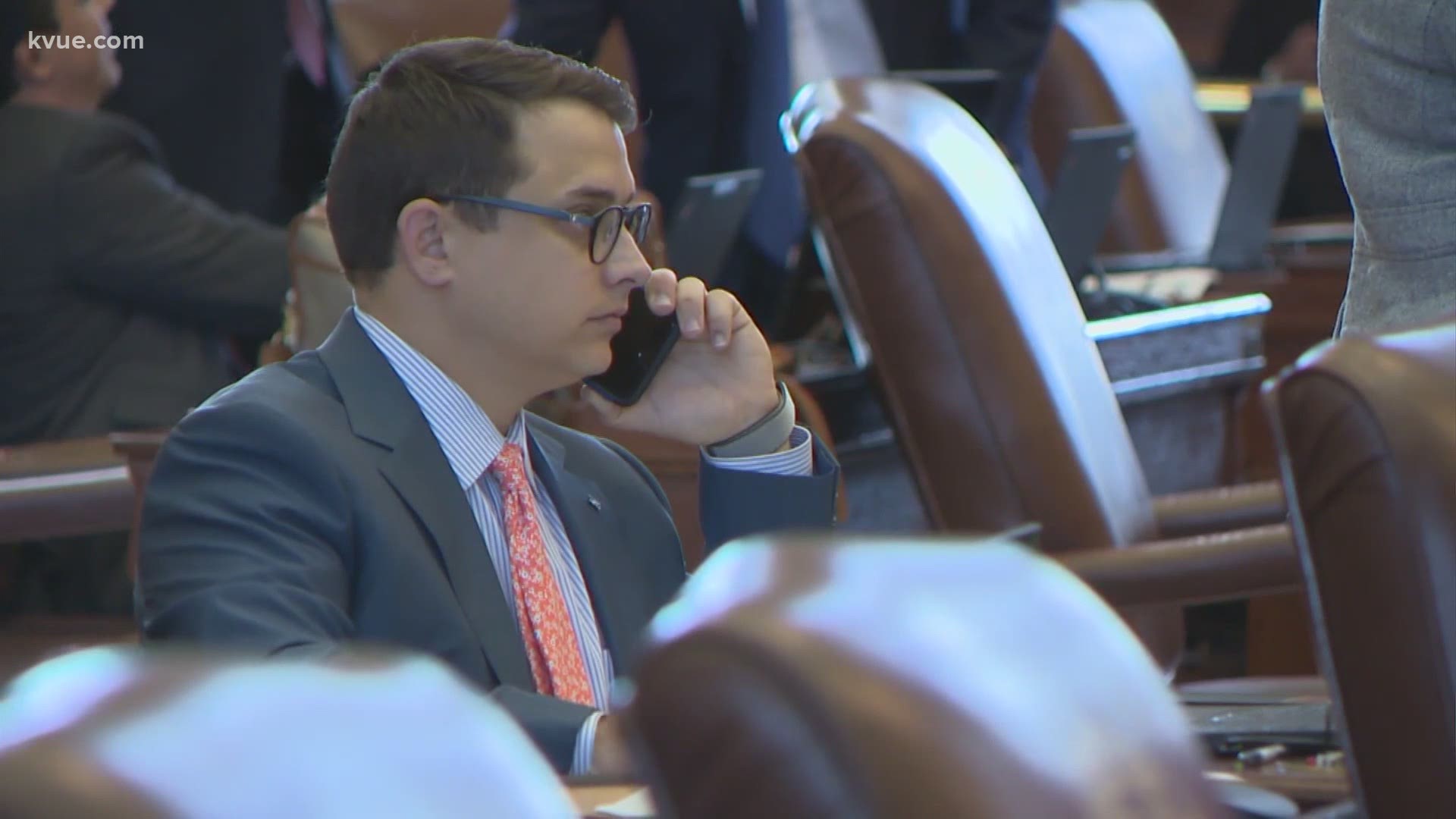 THE TEXAS TRIBUNE – After an early misfire, House Republicans on Thursday succeeded in pushing their proposed restrictions on voting to the legislative forefront as the Texas Legislature’s 2021 session enters its final sprint.

The House Elections Committee’s Republican majority voted to gut Senate Bill 7, the priority voting bill that has already passed the Senate, and replace the bill’s language with that of House Bill 6, a significantly different voting bill favored by House leadership. That maneuvering will put the Senate on the defensive to resurrect its legislation and likely tee up end-of-session tension between the two chambers over competing visions for which proposed restrictions ultimately make it to the governor’s desk.

As passed in the Senate, SB 7 clamps down on early voting rules and hours, restricts how voters can receive applications to vote by mail and regulates the distribution of polling places in diverse urban counties, among several other provisions in the expansive bill. The legislation passed the Senate with support from the chamber’s Republican majority and was awaiting action in the House.

HB 6, approved by the committee’s Republican majority earlier this month, would restrict the distribution of applications to vote by mail, require people assisting voters to disclose the reason a voter might need help in casting their ballot — even if for medical reasons — and enhance protections for partisan poll watchers, including criminal liability for election workers for their treatment of watchers.

On first try, a morning committee meeting descended into chaos when state Rep. Briscoe Cain, the committee’s chair, blindsided his colleagues with a motion to substitute SB 7 with HB 6, which he authored. That effort failed when another GOP lawmaker didn’t vote to follow along after Cain pressed forward, saying there were no objections to adopting the substitute language even as Democrats, shouting at times, continued to object.

As things stand now, SB 7 is a duplicate version of HB 6. The Senate can still revive its priorities if the full House approves the rewritten SB 7 and lawmakers from both chambers convene to cut a deal.

Both bills are prominent pieces in a broader Republican effort this year to enact wide-ranging changes to elections in Texas — many of which have been catalogued as disproportionately harmful to voters of colors — that would further tighten the state’s already restrictive election rules in the name of “election integrity” despite little to no evidence of widespread fraud.

Caught off guard earlier in the day, Democrats on the committee said they were handed the replacement language minutes before they were asked to vote, and repeatedly objected to the move, which would preempt any public hearing by the House on SB 7’s provisions that differ substantially from Cain’s substitute.

“I feel that SB 7 is a significant piece of legislation that we should hold a hearing on it,” said state Rep. John Bucy, D-Austin.

“I agree, but we are doing a committee substitute to match it to House Bill 6, and we've already heard a complete hearing on that exact language,” Cain responded. He argued that the committee’s lengthy hearing on HB 6 was “sufficient.”

“These two bills are substantially different — you have said that time and time again in committee. Many times you have said these bills are totally different when somebody compared it to SB 7,” said state Rep. Jessica González, a Dallas Democrat who serves as vice chair of the committee. “I have to object. This is wrong. We deserve to have a public hearing on this.”

The meeting erupted into chaos as lawmakers spoke over each other and Democrats pushed back on Cain. After adopted the substituted language, Cain then quickly called for a vote so the rewritten bill could head to the House Calendars Committee, which determines whether bills make it to the full Texas House for a vote. But he was forced to withdraw his proposal after state Rep. Travis Clardy said he would “pass” and refused to cast a vote. Without the Nacogdoches Republican’s vote — and Democrats on the committee voting against the bill — there weren’t enough votes for it to make it out of the committee.

When lawmakers returned to the committee later Thursday, Clardy fell in line with his Republican colleagues.

The push to replace the Senate’s priority election bill with Cain’s proposals likely serves as an indication of how far apart the House and the Senate are on what changes the Legislature should make to voting this session. Instead of uniting behind identical, or even substantially similar bills, each chamber has moved forward with different measures.

Lt. Gov. Dan Patrick deemed SB 7 a legislative priority while House Speaker Dade Phelan has made clear he supports the proposals in HB 6. After the morning committee dustup, a Phelan spokesman said his office continues to "support the language contained in HB 6 and in the interest of having as many viable vehicles for that legislation, we also support putting the HB 6 language into SB 7."

But while Cain’s actions essentially gut SB 7 as it was passed in the Senate, it won’t foreclose its original restrictions from becoming law.

If the full House votes to approve the rewritten bill, it will then head to a conference committee in which members of the two chambers will work to hash out the differences between the version passed out of each chamber — and possibly bring back the bill’s original restrictions.

“Just because we substitute it in our side does not mean the language on Senate Bill 7 is inherently dead,” Bucy said in an interview after the morning committee hearing.

Without a public hearing and House debate on SB 7, the Legislature could end up passing the original version of the bill — or a version that includes some of the original, controversial provisions in SB 7 — without any public input or consideration of its provisions in the House, Bucy argued. By pushing the SB 7 vote through, Cain, who did not respond to requests for comment Thursday, closed off consideration of the wide-ranging restrictions originally proposed in SB 7 that touch almost the entire voting process.

“These are not the same bills so in my opinion it should require a hearing,” Bucy said. “The people should have their voices heard on SB 7.”

After the morning hearing, opponents of both bills gathered to lambast Cain's effort to push the legislation through despite previously hearing more than 17 hours of divided public testimony on HB 6. Republicans and several partisan poll watchers endorsed the legislation that Cain has offered to "restore trust in the electoral process." Phelan has also defended the legislation as a “voter integrity” measure that would address instances in which “certain counties kind of made up their own election law on a whim.”

Like other Republican proposals, HB 6 targets Harris County’s initiatives from the 2020 general election. Various counties proactively sent vote-by-mail applications to voters who were 65 years and older, who automatically qualified to vote by mail in Texas. But Republicans zeroed in on Harris County officials when they attempted to send applications to all 2.4 million registered voters in the county with instructions on how to determine if they were eligible. The Texas Supreme Court ultimately blocked that effort.

“I don’t see voter suppression in House Bill 6,” Phelan said in an interview with KXAN. “And I think the debate will bear that.”

But it's opposed by civil rights groups who have warned it violates federal safeguards for voters of color and raised concerns about the punitive nature of the bill against election workers.

Advocates for people with disabilities worried it could violate the federal Americans with Disabilities Act and cautioned against complicating the voting process for voters with disabilities by creating new requirements for the individuals they select to help them.

Later on Thursday, Democrats on the committee penned a letter to U.S. Attorney General Merrick Garland to put the Department of Justice on notice about the committee’s “grave deviation from standard operating procedure” in pushing the SB 7 rewrite through without notice and without public input.

“Texas has a long history of disenfranchising people of color, and if the leadership of the governing majority has it their way, that history will surely continue,” the Democrats wrote in a joint letter. “We have seen recent, coordinated attempts to pass disenfranchising legislation in states across the South, like Georgia, North Carolina, and Arizona. We ask that you review the facts, and if it is deemed appropriate, that the Civil Rights Division monitor the proceedings of the House Elections Committee and the Texas House for the remainder of session.”

Neelam Bohra contributed to this report.

Austin police searching for UT student who went missing in 1976