'Stay in your lane': NRA mocks doctors over guns, and doctors fire back

The tweet came just hours before the mass shooting at the Borderline Bar & Grill in Thousand Oaks, California, which claimed 12 lives and once more refocused national attention on the gun debate. 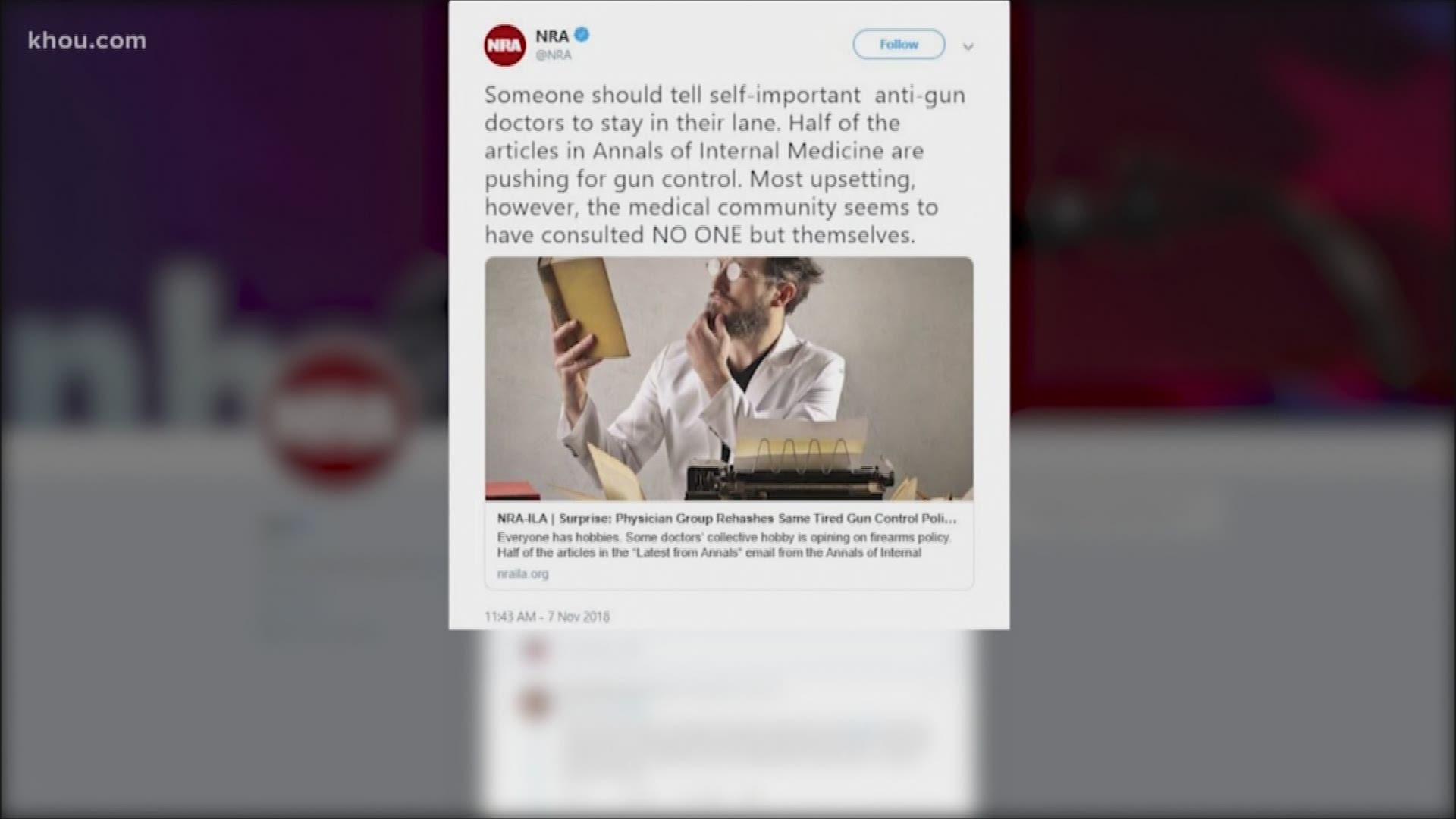 HOUSTON - A tweet by the National Rifle Association has triggered a week-long war of words between the NRA and physicians across the country, including doctors who work in the Medical Center.

It started with a position paper written by the American College of Physicians titled "Reducing Firearm Injuries and Deaths in the United States."

It was published by the Annals of Internal Medicine on October 30th. Doctors said firearm violence continues to be a public health crisis in the United States that requires the nation's immediate attention.

About a week later, the NRA tweeted:

"Someone should tell self-important anti-gun doctors to stay in their lane. Half of the articles in Annals of Internal Medicine are pushing for gun control. Most upsetting, however, the medical community seems to have consulted NO ONE but themselves."

Someone should tell self-important anti-gun doctors to stay in their lane. Half of the articles in Annals of Internal Medicine are pushing for gun control. Most upsetting, however, the medical community seems to have consulted NO ONE but themselves. https://t.co/oCR3uiLtS7

The tweet has been retweeted more than 1,300 times with more than 22,000 responses; many of which include the #StayInTheirLane or #StayInYourLane

Dark is one of several Houston-area doctors who've used Twitter to talk about how gun violence is a part of their life. Many doctors have posted photos showing bloody emergency rooms, surgical rooms or bloodied clothing; graphic photos shared to bring home their point of just how often they treat victims of gun violence.

"About 500 to 600 a year, at our emergency department," said Dr. Dark of how many gunshot victims Ben Taub sees on average each year. "And that’s just the people well enough to make it to the E.R. Many people die on the streets."

#StayInYourLane is the latest point of contention between doctors and the NRA. Physicians have been advocating to study how gun violence impacts public health.

The Centers for Disease Control hasn't been able to lead any studies on gun violence since Congress, in 1996, inserted a provision into a spending bill - which was approved - that mandated that none of the funds made available for injury prevention and control at the CDC be used to advocate or promote gun control.

"We need to study it from a medical perspective like we do with everything else," explained Dark. "Motor vehicle collisions, heart attacks, strokes. Those are the things we see in the emergency department every day. And so, the information we have is limited."