The Mousa Al Kazma family from Aleppo, Syria, arrived in Fort Worth Thursday, after years spent trying to find a permanent, safe home. 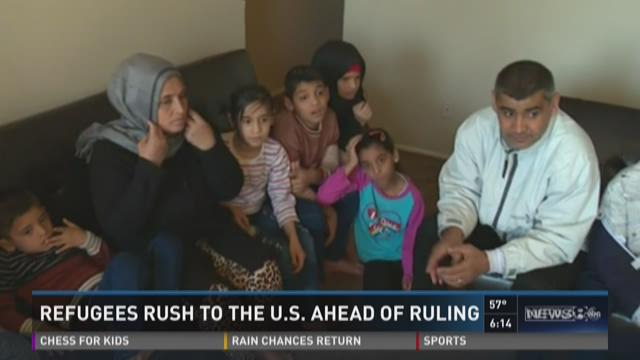 Since 2011, the Mousa Al Kazma family has been looking for a place to call home because the place they called home isn't safe enough to call home any longer.

The family of eight, including two sets of twins, is from Aleppo, Syria. After years of living as refugees in Lebanon, they were told they would finally come to Texas to start their new life on Feburary 2.

But their plans, and the plans of 1,150 other refugee families, were put on hold last month, according to Refugee Services of Texas, when President Donald Trump announced his executive order, halting travel from certain predominantly Muslim countries.

Protests erupted around the US, including at Dallas/Fort Worth International Airport.

"He said, 'We were very afraid when they rescheduled our travel,'" said case manager and interpreter Khalad Amer. She was translating for Fahmi Mousa Al Kazma, the father. "He said, 'OK, this was the last hope and we lost it; we're not coming anymore.'"

Speaking through Amer, the family told us they were despondent, having left nearly everything behind in preparation for the trip. But then, a window of opportunity opened up as a judge lifted the travel ban. The family arrived via Houston, Frankfurt and Beirut early Thursday morning.

"We felt a huge relief," the husband said through a translator.

According to Chris Kelley, of Refugee Services of Texas, they're just the second family to arrive in Texas since the ban was lifted.

"We want people to know they're welcome here," said Tracie Middleton, who works for the Episcopal Diocese of Fort Worth. She says local churches quickly put together and apartment for the family once they got the word the travel was back on.

"It's part of our tradition to welcome a stranger," she said.

The family, who were olive, grape and pomegranate farmers in Aleppo, say they look forward to having their six children, ages 7-14, live and study without fear. The family says just the sound of fireworks send their children cowering.

Through the interpreter, Fahmi had this message:

"We want to live just like all other people, we want a safe life. That's all."