Pence, Birx appeal 'to every Texan' to wear a mask after state's positivity rate triples in one month

The positivity rate in the state has now reached 13%, Gov. Abbott said, a warning sign that shows the virus has increasingly spread across Texas communities. 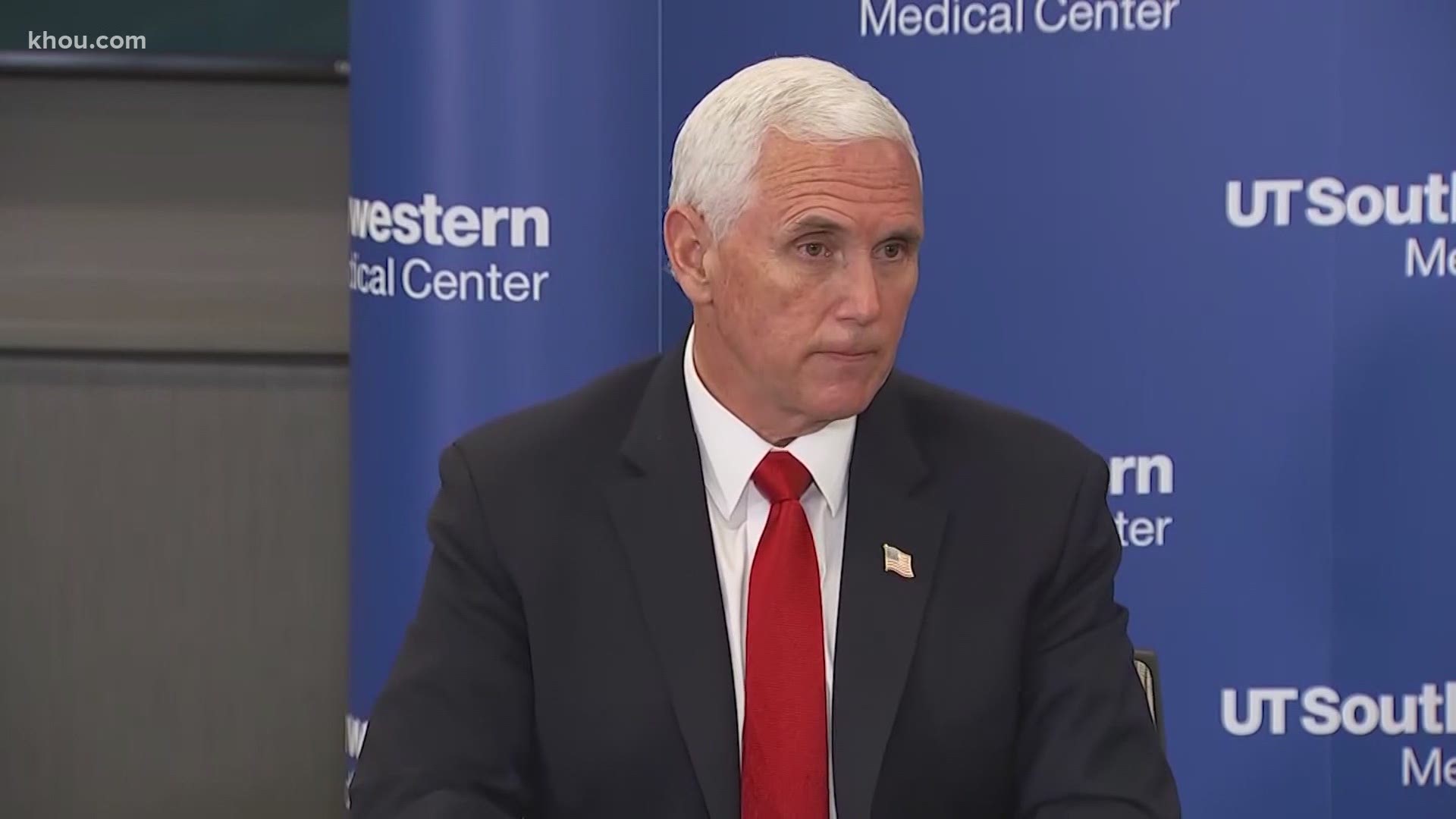 Vice President Mike Pence said Texas "flattened the curve" until about two weeks ago when "something changed" during a visit Sunday in Dallas.

The vice president met with Gov. Greg Abbott in the city for a COVID-19 briefing at UT Southwestern Medical Center.

"You flattened the curve here in Texas... but about two weeks ago something changed," Pence said during a news conference after the briefing.

The positivity rate in the state has now reached more than 14%, Abbott said, a warning sign that shows the virus has increasingly spread across Texas communities. The rate had been down to 4.27% by the end of May.

The positivity rate is the percentage of people who test positive among those tested for the disease. In Texas, the rate has more than tripled in the past month.

"Wearing a mask is just a good idea," he said.

Watch the entire news conference below:

The two leaders were joined by a panel including Dr. Deborah Birx, a member of the White House's coronavirus task force, Sen. John Cornyn and Department of Housing and Urban Development Secretary Dr. Ben Carson.

Abbott and the others stressed the importance of wearing masks to slow the spread.

While she spoke, Birx reiterated Abbott's plea to the public to wear masks, saying that new research has found wearing a mask not only protects those around you, but partially protects yourself as well.

"I'm really appealing to every Texan to wear a mask," she said.

Birx stressed the importance of "100% compliance" with mask orders in Bexar, Dallas, Harris and Travis counties as hospitalization rates have increased over the past two weeks, particularly among younger adults with underlying health conditions.

Birx also commended Abbott's reliance on the state's positivity rate as an indicator for action, describing it as "an alert system we can trust."

Abbott has repeatedly said he will follow the data about how to move forward, particularly using positivity rates to do so, a statement he said again Sunday.

Pence encouraged younger Americans, including Texans, to be careful and limit interactions with older people, including their own family.

Abbott also said keeping businesses open will "require all Texans" to wear a mask, wash or sanitize their hands and keep a safe distance from each other. He did not, however, announce any new regulations or orders.

"Our objective is to save lives as Texas continues to reopen your economy and help to lead this country back to work," Pence said.

Carson and Cornyn also briefly spoke during the news conference, both praising Abbott's response to the pandemic.

The group took just three questions from reporters, among them was a question to Pence about whether he had any regrets about reopening across the country.

RELATED: 'In hindsight': Gov. Abbott says he should've delayed the opening of bars

The briefing was after Pence took the stage Sunday morning at megachurch First Baptist Dallas for a "Celebrate Freedom Sunday" event.

RELATED: Statues of 'our nation's greatest heroes' have been torn down, VP Pence says to crowded Dallas church

The vice president had landed around 10 a.m. at Dallas Love Field for the two events. He boarded Air Force Two to leave Dallas shortly after 3 p.m.

Pence's visit comes just days after Abbott rolled back the state's reopening phases. The governor ordered the shut down of bars on Friday and said restaurants must reduce capacity to 50% by Monday.

Abbott made the decision to do so as cases and hospitalizations have continued to surge across the state for several weeks, surpassing new highs almost every day.

He also encouraged people to stay home as much as possible during remarks Sunday.

"If you don't need to get out, there's no reason to get out at this particular time," Abbott said.

Sunday was the first day the state has not seen a new record number of hospitalizations, dropping down below 5,500 after 16 straight days of record highs, reaching 5,523 hospitalized COVID-19 patients Saturday.

The number of COVID-19 patients in North Texas hospitals rose slightly on Sunday, from 1,248 Saturday to 1,261 people. The rise set a new record for the region as well, which has about 444 ICU beds available, state officials report.

The region around Houston, however, has a much smaller number of available ICU beds, about 169, with 1,642 COVID-19 patients currently hospitalized, the highest number of any region in the state.

Over the month of June, Tarrant County's hospitals have seen an influx of COVID-19 patients as the number of beds occupied by those with the disease have more than doubled to about 11% of total hospital patients and about 7% of total beds.

Dallas County officials said the same trend had occurred there, with the number of Dallas County residents with COVID-19 being treated in a hospital having doubled in June.