Jorgensen, who supports deregulation and laissez-faire capitalism, says the "government is too big, too big, too bossy, too nosey, too intrusive." 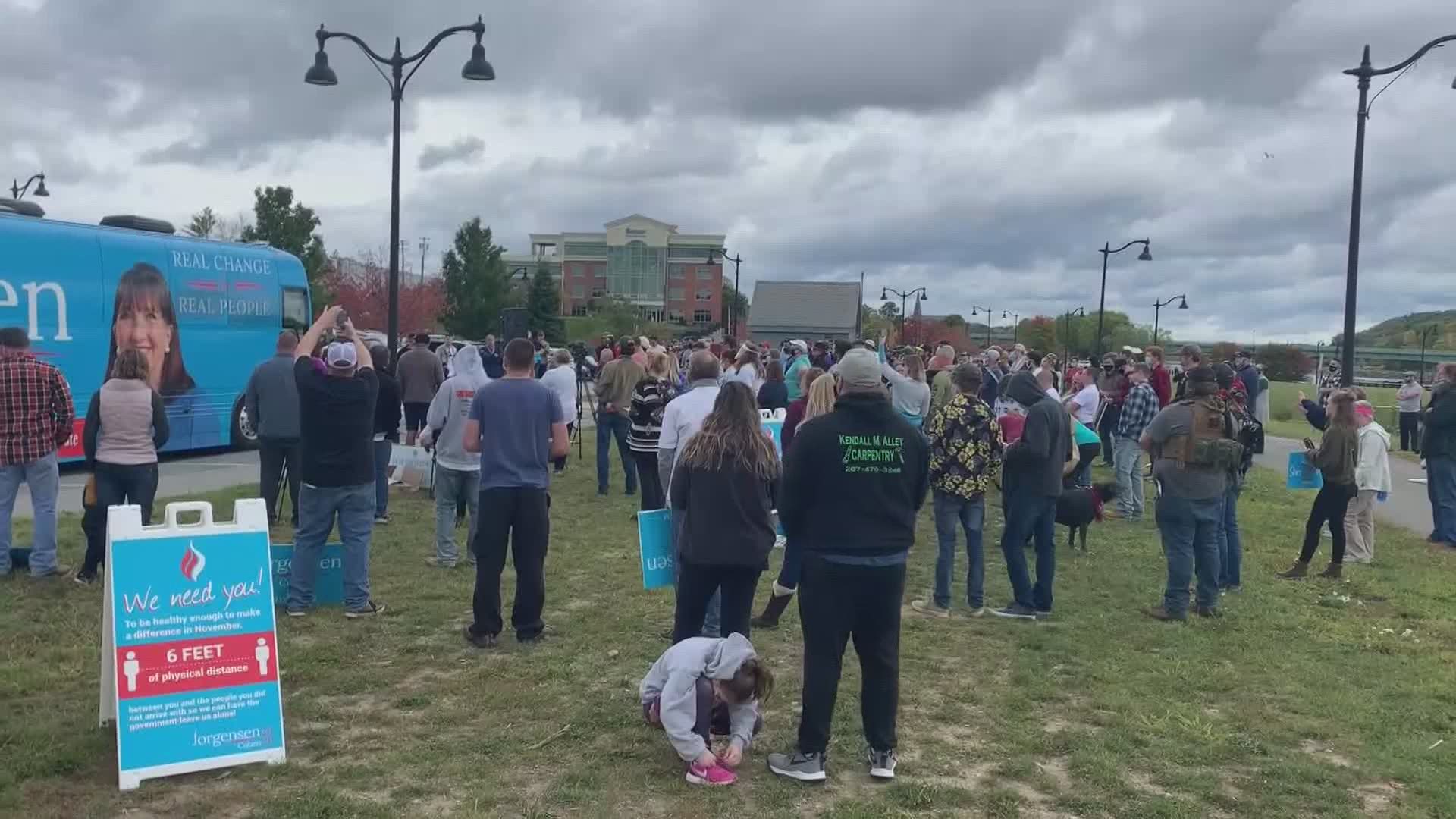 Jorgenson stopped at Bug Light Park in Portland Friday evening and made more campaign stops across the state Saturday.

Jorgenson is one of three third party candidates that Mainers will see on their ballots. In addition to Republican incumbent President Donald Trump and Democratic nominee former Vice President Joe Biden, Howie Hawkins of the Green Party and Roque "Rocky" De La Fuente of the Alliance Party will also appear on the ballots.

More than 100 people gathered at the Bangor Waterfront Saturday morning to hear Jorgensen speak in a question-and-answer-style event, touching on issues such as gun rights, taxes, and education reform.

Now at the podium: pic.twitter.com/RxkvfEE2X8

After the event, she spent some time with the press, answering questions about ranked-choice voting, the Libertarian Party, and why she feels she should be at the Presidential Debates.

The Libertarian Party used the event to spread the party's platform and allow for people to sign up and register with the party as it hopes to become a permanent party on future ballots.

Jorgensen, who supports deregulation and laissez-faire capitalism, says the "government is too big, too big, too bossy, too nosey, too intrusive."

"But the worst part is they usually end up hurting the very people they help," she said.

Government anti-poverty programs don’t work. The real cure for poverty is a vibrant economy that generates plentiful jobs and high wages, combined with an affordable cost of living. As President, I will work to eliminate policies that cripple economic growth.#Debates2020

Jorgensen didn't qualify for the presidential debates and made her feelings about that known on Saturday.

“I absolutely think I should have been on that debate stage because every American can vote for me in all 50 states," Jorgensen told reporters. “Obviously they want only two people on stage to help the Democrats and Republicans and not the American people.”

The Commission on Presidential Debates' criteria to qualify for debates says a candidate must "appear on a sufficient number of state ballots to have a mathematical chance of winning a majority vote in the Electoral College, and have a level of support of at least 15% of the national electorate as determined by five selected national public opinion polling organizations, using the average of those organizations’ most recently publicly-reported results at the time of the determination."

Jorgensen meets one of those requirements, being that she's on the ballot in all 50 states and the District of Columbia, but according to recent polls, Jorgensen has between 1 and 4 percent of support.

But in Maine, where the 2020 General Election will implement ranked-choice voting in the presidential race for the first time in U.S. history, third party candidates will likely have a greater impact than in other states.

Jorgensen said she thinks ranked-choice voting should be implemented nationwide.

"I hope every state does that so people can vote for what they really want. It will show America that this is what people really want," Jorgensen said.

Jorgensen has been a part of the Libertarian Party's political scene for quite some time. She was Harry Browne's Libertarian Vice-Presidential nominee in the 1996 election and prior that she ran for South Carolina's 4th Congressional District in 1992. This year Jorgensen's running mate is Jeremy "Spike" Cohen, the host and co-host of several podcasts.

Jorgensen has a background in business and marketing and has a Ph.D. in industrial and organizational psychology.