Michael Steele says the Republican Party needs to "return to being a governing party that the American people would trust." 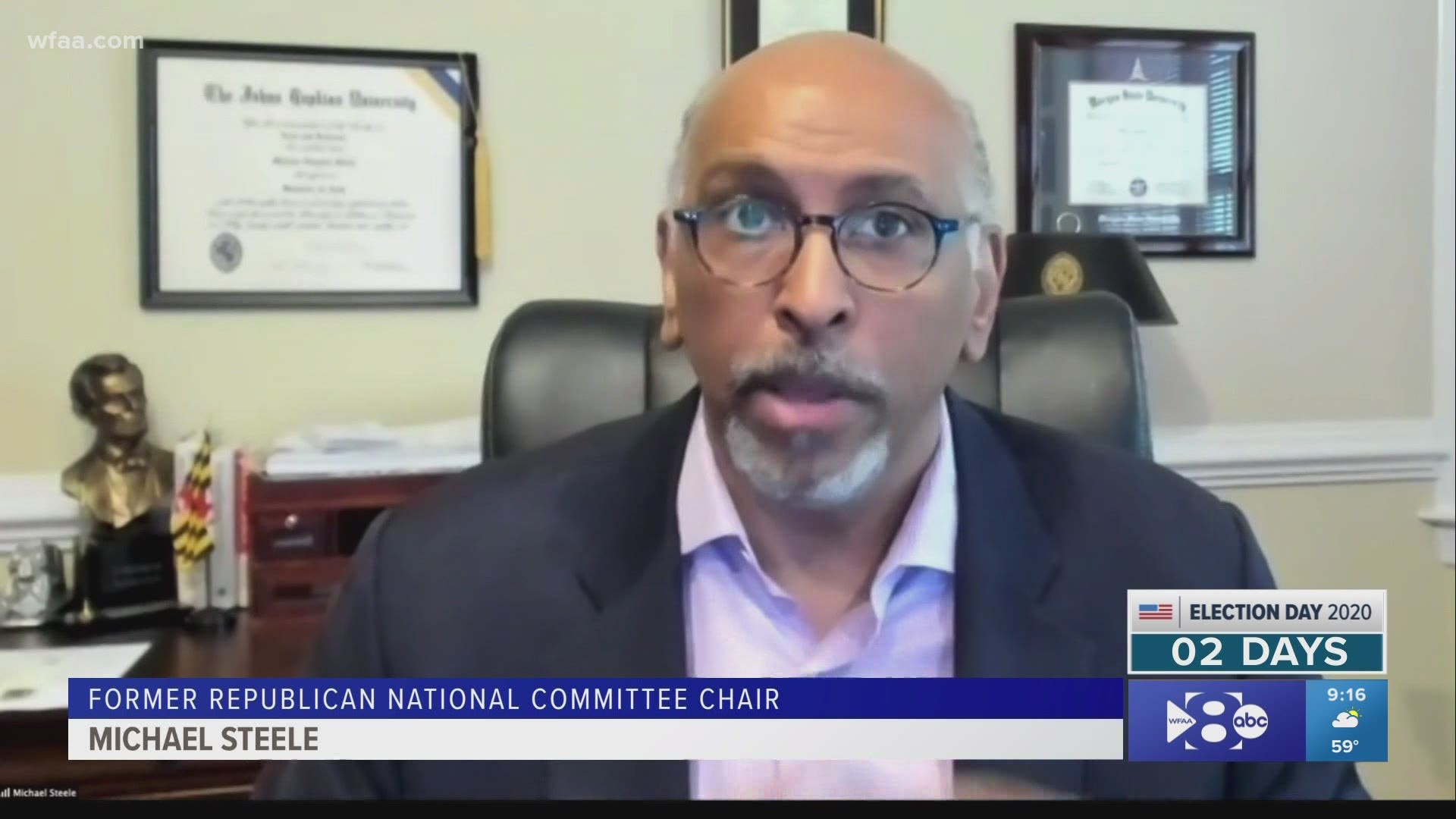 Although he once led the Republican National Committee, Michael Steele says he’s not voting for Republican President Donald Trump.

Steele says there have been many “breaking points” for him over the last four years.

"Character matters. The ability to lead through difficult times matters. And I’ve found the President wanting on both of those fronts," Steele said on Inside Texas Politics. "That’s my personal assessment. Voters will make their own."

He says he's a lifelong Republican who wants to see his party find their way again. Republicans didn't release a party platform this year, which was a mistake, Steele said.

He said it's time for the Republican Party to find its way and "return to being a governing party that the American people would trust."

"You're going to see a lot of handwringing whether Trump wins or loses because the internal identification of who we are and what we believe and what we stand for has got to get vetted out," Steele said.

He said the party needs to determine whether it stands with Russian President Vladimir Putin or North Korea's Kim Jong-un.

He said the party wants to fight over those "ideas and values."

"I refer to myself now as a Motel 6 Republican, because someone has to leave the lights on," he said, with a smile.

Steele said there will be a Republican battle for 2022 and 2024 regardless of if Trump wins.

How will Trump do in Texas?

Texas has voted Republican in presidential races since 1980.

Democrats have been treating Texas as a battleground in the presidential race. Vice presidential candidate Kamala Harris visited the state on Friday in a final push before Election Day.

RELATED: 'We vote because everything is at stake': Sen. Kamala Harris stumps in Fort Worth on final day of early voting

"This is all part of the pre-arranged fake news that the media engages in," Giuliani said about polls showing Biden could lead Texas.

Giuliani continues to try to turn the Hunter Biden laptop story into a campaign issue against Joe Biden.

But even Sen. Ted Cruz says the issue isn’t moving any voters.

"I have great respect for Ted, but he’s wrong," Giuliani said on Inside Texas Politics.

He thinks the president will likely win by the same margin he did in 2016, which was around nine points.

"You think those polls are correct when Joe Biden has 14 people show up for him and President Trump has 30,000? They weren’t correct last time, my friend."

Giuliani also found himself in the middle of a controversial scene in Borat 2.

He says he is considering legal action, much like the Conservative Political Action Conference (CPAC), which was also featured in the movie.

“It completely falsified what happened. I called the police on them, which they don’t mention. I have the footage of them running out, running away from the police."

The largest U.S. city on the Mexico border is struggling to contain a rapidly rising number of COVID-19 infections.

El Paso saw more than 1,300 new cases on the day before Halloween alone.

“We’re just trying to get our arms around it,” Mayor Dee Margo said.

The El Paso County judge recently instituted a curfew and ordered a two-week shutdown of non-essential businesses, a move the mayor disagrees with.

The Texas Attorney General and several businesses have since filed a lawsuit seeking to overturn the shutdown.

RELATED: 'This is a crisis situation': State officials are tracking hospital beds as COVID-19 cases continue to rise

The Texas Division of Emergency Management is there as well, assembling pressurized tents outside hospitals to help ease the burden.

There is also an alternate care site at the convention center which can house 50 patients but can expand to 100 if required.

“This spread is community spread and it is not coming from any individual businesses per se. It’s coming from people shopping, going to restaurants,” the mayor said.

“And it’s coming from travel to Mexico. We’re the largest U.S. city on the Mexican border and there’s family on both sides, commerce on both sides and it has been that way for over 350 years.”

Despite the serious uptick in infections, the mayor does not expect any significant pandemic impact on Election Day because turnout was so robust during early voting.

And he says the only way the city will get the outbreak under control is if everyone follows the recommendations by most epidemiologists and doctors.

“You’ve got to wear face coverings, maintain your distancing, and watch your hygiene. You can’t let that go until we have a vaccine.”