After a close November vote, who will win the runoff election for Houston mayor? Our exclusive poll answers that question and more. 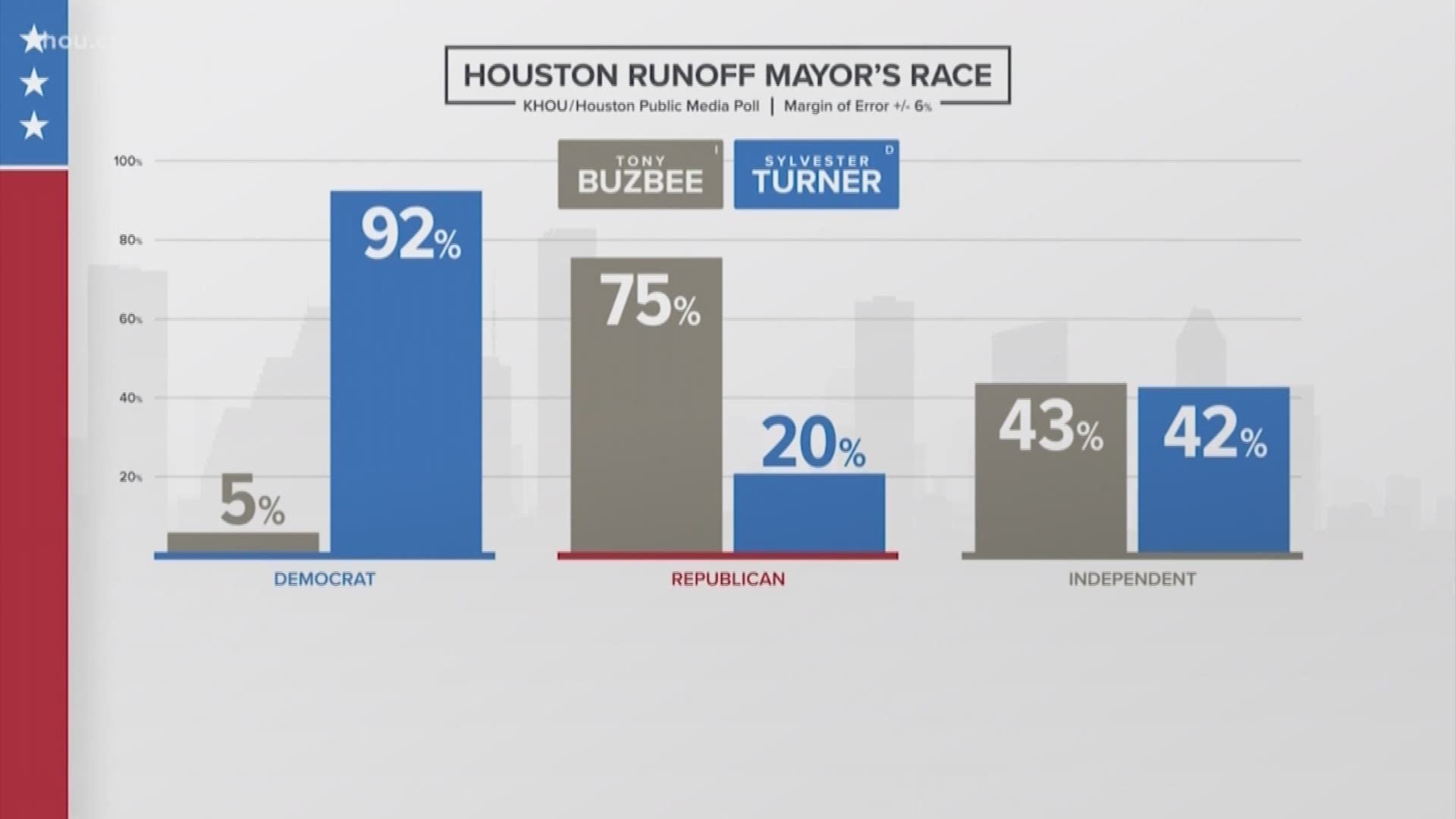 HOUSTON — The Nov. 5 race for Houston mayor ended in a runoff between incumbent Sylvester Turner and challenger Tony Buzbee.

Turner ended up garnering about 46 percent of the vote -- less than the 50-percent-plus-one-vote he needed to win outright. Buzbee amassed about 28 percent of the ballots.

The runoff election is Saturday.

In an exclusive new poll from KHOU 11 and Houston Public Media, Turner leads Buzbee among likely voters by 56 percent to 34 percent.

RELATED: Buzbee: Runoff election for Houston mayor will be 'a full-on slugfest'

Mayor Sylvester Turner leads Tony Buzbee among likely voters in the December 14 runoff election for Mayor by 56 percent to 34 percent, with 6 percent of voters undecided.  Another 5 percent of respondents refused to reveal for whom they would vote.

"There's really nowhere for Tony Buzbee to go and I think proof of that is he's not buying a lot of TV ads, he's not spending the kind of money he spent in the general election," said Bob Stein, KHOU political analyst.

"This is a partisan vote, the mayor is winning well over 90% of democratic voters, but he's picking up almost 20% of Republican voters," Stein said.

Does age make a difference?

Turner issued this statement about the election:

"You never assume anything, you never take anything for granted. In every election that I've been in and just like this one you run a little bit nervous and you run like you're 20 points behind. Today I'm the mayor and the best way for me to respond, is to continue to do my job and to focus on the things that matter, and that's doing everything I can to improve people's lives from their home to their street, to their neighborhood in the city."

Mayoral candidate Tony Buzbee issued the following statement in response to the poll:

“I don’t put much stock in polls. When I started my campaign, nobody gave me a chance, but here I am, the son of a butcher in a runoff election to become mayor of the nation’s fourth-largest city. The runoff election is Saturday, December 14th, which is when voters will decide the future of Houston. Their vote is the only poll that matters to me. Not the opinions of pollsters, pundits or pay-to-play donors who have a vested interest in propping up Sylvester Turner’s failed administration. I am ready to go to work on behalf of the residents of Houston to improve our streets, reduce crime, give firefighters the pay raise they deserve, make city contracting fair and transparent so that every Houstonian has an equal shot at city contracts and to stop the ridiculous flooding that plagues our city. These are all issues where Sylvester Turner has earned a failing grade. I place my trust in the voters of Houston and am confident that they will make the right decision on December 14th.”

*Editor’s note: Live telephone interviews (64% with cell and 36% with landline telephones) were conducted with 234 of the 516 registered voters who were previously interviewed in September and October 2019. The margin of error for the survey is +/- 6.4% at the 95% confidence level. This means that if we repeated the same survey 100 times, the responses to any question would be within range of +/- 6.4% in 95 of the 100 surveys.