Harris County Judge Lina Hidalgo’s orders designed to slow the spread of COVID-19 have generated outrage among some. 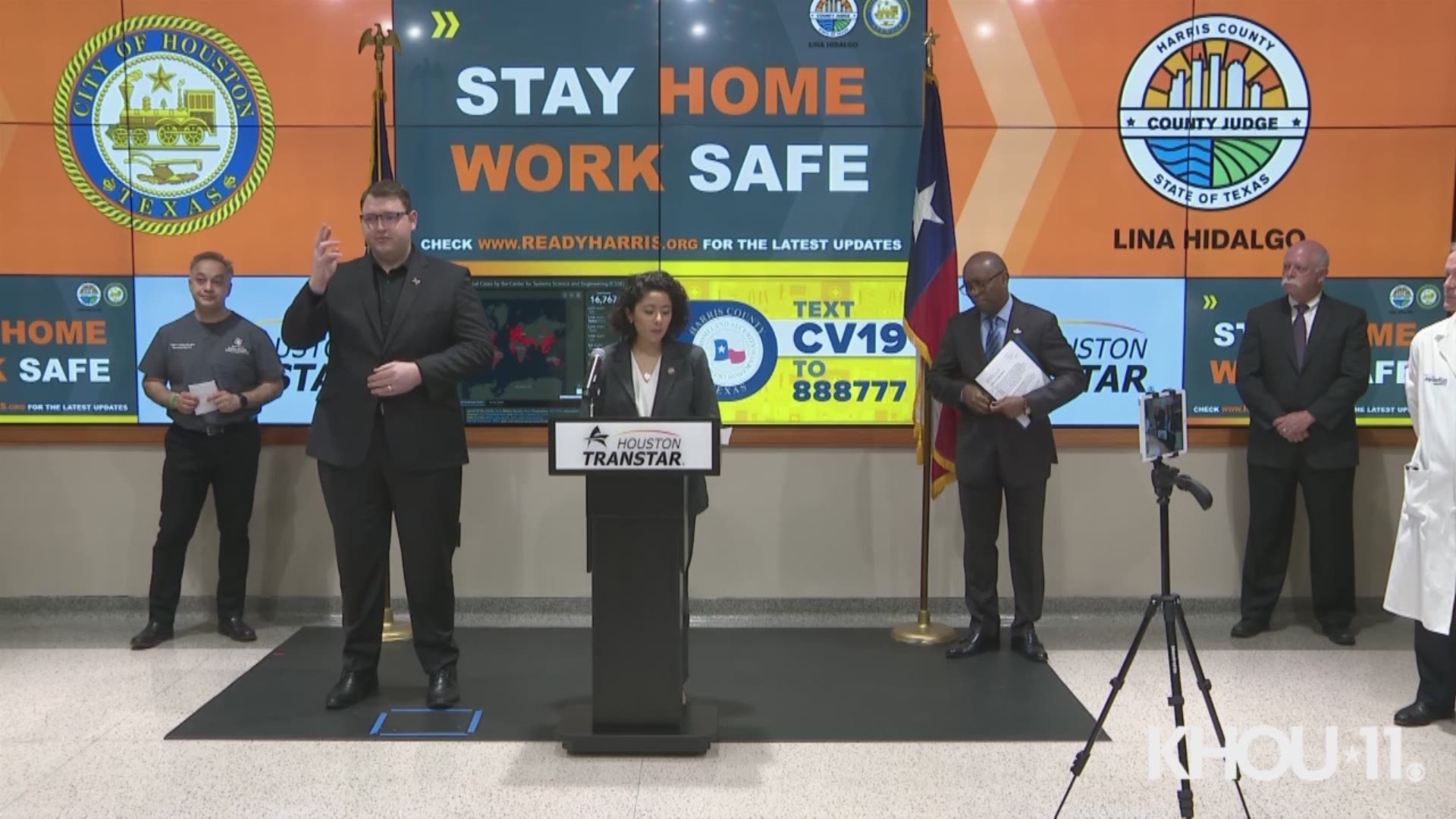 Editor's note: The video on this story is from March 24, 2020 when Harris County's "stay home" order was first announced

(The Texas Tribune) — On March 1, before Harris County reported its first confirmed case of the coronavirus but as the disease was already infiltrating America’s biggest cities, Harris County Judge Lina Hidalgo made a call to ground zero.

It was Dow Constantine, her counterpart in Washington state’s King County, who picked up. At the time, he was responding to what was believed to be the first coronavirus death in the United States.

Hidalgo believed Texas had the benefit of precious time, and she wanted Constantine’s advice to make sure she didn’t squander it. What did he wish he had known two weeks ago? How could Washington have been more prepared?

“I sat down with my team and said, ‘Guys, this is coming.’ It’s a bit like a hurricane in that we see it coming, but with this one we had more time,” Hidalgo said in an interview with The Texas Tribune. “There was no excuse to be caught flat-footed.” (Constantine told the Tribune that Hidalgo was the only county official who took the initiative to reach out for advice in the early days of the crisis.

Harris County, the state’s largest, leads Texas in coronavirus cases and deaths, but the area has largely avoided the fates of the hardest-hit regions like Washington state, New York and Louisiana, where a surge of patients overwhelmed hospital systems. While the daily number of new cases reported in Texas continues to climb, the Houston area’s numbers have plateaued at a number far below their peak last month. The result is that Hidalgo, a first-term political figure, has been thrust into the spotlight.

RELATED: Hundreds of contact tracers will help track the spread of COVID-19 in Harris County

Hidalgo, who took office in the aftermath of Hurricane Harvey, came into the job knowing she would have to prepare for disasters. “This is a huge county, and when you have landmass the size of Rhode Island and around 5 million people, things are bound to happen,” she said.

What she was not prepared for was the acrid backlash that would follow.

Elected in 2018, the 29-year-old Latina has been praised as an up-and-comer in the Democratic Party — and, along the way, developed an impressive list of high-profile detractors. Initially painted by rivals as an in-over-her-head newcomer who rode a blue wave into office, ousting popular Republican incumbent Ed Emmett, her critics are now lacing into her for her handling of the coronavirus.

RELATED: 'The virus has not left our city' | Houston mayor, experts urge caution as businesses reopen this weekend

Conservative activists have called her underqualified, a socialist and the face of “government overreach” during a public health crisis. Comments on her social media posts often invoke even more extreme language. And Lt. Gov. Dan Patrick has referred to her as not “ready for primetime,” later likening her to another young Latina in left-wing politics, U.S. Rep. Alexandria Ocasio-Cortez, D-N.Y.

“You’re always going to have detractors,” Hidalgo said. “I’m not going to put approval ratings on a pedestal. That’s not the point.”

Her supporters, meanwhile, have lauded the young immigrant and political rising star as a fighter with a plan to keep Texans safe, and they credit her with acting more decisively than the state’s Republican leadership.

“I think she’s taken some necessary and bold actions to protect the people of Harris County,” said U.S. Rep. Joaquin Castro, D-San Antonio, who also supported Hidalgo’s election bid in 2018. “Emmett was fairly well liked, and people, even some Democrats, were unsure if she’d be able to come in and do the job well. I think she’s pulled that off so far.”

Born in Bogotá, Colombia, Hidalgo and her family lived in Peru and Mexico before moving to Harris County in 2005. After graduating from Seven Lakes High School in Katy, she earned a bachelor’s degree in political science from Stanford and moved to Thailand to work for an nongovernmental organization focused on press freedoms.

Interested in a career in public service — she considered becoming a public defender — Hidalgo enrolled in a joint public policy and law program at Harvard and New York University.

Eventually, she grew tired of theory and wanted to leap into practice. She left school in 2017 to run for county judge in Houston.

She had a bold vision for her first term in executive office, including speeding up flood-control projects in Harris County and enforcing stringent requirements so new development wouldn’t flood people downstream. This year, she was also able to do some work on early childhood education — though some of the plans her team had related to transportation and juvenile justice reform have had to take a back seat to the virus.

Her critics so far have been unrelenting. Most have come from the right, including conservative activist Steve Hotze, who has sued her several times, accusing her of being too quick to impose restrictions that infringe on personal liberties.

And she has also faced some pushback for allowing the Houston Rodeo to continue for eight days while other large gatherings around the country were canceled.

Hidalgo, the second-youngest Harris County executive ever elected, wants to be remembered as being thoughtful and prepared during this crisis. And she doesn’t want her age or her stature — she stands at 5’1” — to fool anyone. In her 16 months in office, she’s already shepherded the county’s cities through several disasters, including a large fire, several floods and a tropical storm, to name a few.

It was only a matter of time before the next tragedy struck, she said.

In fact, that’s part of the reason she decided to run for office. When she did, before Hurricane Harvey’s landfall in 2017, Harris County had already had two 500-year floods, and Hidalgo felt that “not enough was being done.”

“We’re always prone to flooding and hurricanes, and so that means we face these challenges, but we have incredibly resilient people prone to helping each other,” she said.

But the virus was a new kind of test. Four days after her call to Constantine, on March 5, Harris County reported its first two cases of the virus — a man and woman both believed to have been exposed while traveling in Egypt. A day later, the Houston-area case count had grown to eight.

But with the number of infections growing, Hidalgo moved to close bars and restaurants March 16, and about a week later, Hidalgo issued a countywide stay-at-home order.

“Initially, I think Judge Hidalgo wanted to put the stay-at-home order in place sooner than I did,” said Turner, noting that while he initially had concerns about the edict, after looking at the increasing coronavirus numbers, he “certainly came around and agreed” with it.

All three actions preceded similar ones from Gov. Greg Abbott, with Hidalgo sometimes moving more swiftly than the state’s chief executive by several days or more.

Hidalgo said all of her decisions so far have been guided by conversations with a group of Rice University researchers, “best practices across the country and world,” and discussions with experts at local medical centers, among others. She was determined, she said, to heed the advice of health experts above all.

“I have this physical feeling that there’s literally no room in my brain for politics,” Hidalgo said. “I’m willing to be painted as the person who did too much if I saved lives and ensured that our economy is resilient and that we’re not just lifting and putting orders up and down.”

But her response has made her the subject of much scrutiny and a target for some of the city’s and state’s Republicans who see inconsistencies in her approach.

Hidalgo at one point signed an executive order that would have released inmates deemed low risk from Harris County jails. While a spokeswoman for Hidalgo said the order was in effect for some time, a local judge later intervened, ruling the order void. Attorney General Ken Paxton also fought the order, saying it released “hardened criminals” into the streets.

In late April, Hidalgo mandated face masks in the county, which resulted in a lawsuit against her and complaints from local police unions that it was “tremendously bad public policy.” Those who didn’t abide by her rules faced a fine of up to $1,000 until Abbott overruled her order.

“She tried really hard to get people out of the jail, and then was turning around and saying people could be fined or subject to jail time if they weren’t wearing a mask,” said state Sen. Paul Bettencourt, R-Houston. (Although an initial draft of the order mentioned jail time as a punishment, a spokesperson for Hidalgo later said that the penalty for not wearing a mask would’ve only resulted in a fine.)

“You can’t talk out of both sides of your mouth,” Bettencourt said, adding that “there’s a consistent overreach on public policy on her executive orders.”

Her peers in local government have called her out as well; neighboring Galveston County Judge Mark Henry called her mask order unconstitutional.

Hidalgo’s backers think her gender, age and ethnicity — she’ll regularly repeat her announcements during press conferences in Spanish to her constituents, more than 40% of whom are Hispanic — have contributed to the criticisms. Case in point: By the time she issued her face mask edict, Bexar, Dallas and Travis counties had already enacted similar orders. Farther south, Laredo’s mask rule was also in place.

But only Hidalgo was publicly lambasted by Patrick, the state’s lieutenant governor, and was the subject of potential legal action. He referred to her as the “29-year-old AOC acolyte in Harris County,” a jab comparing her to Ocasio-Cortez.

“All these decisions have been inflection points in their own way. I derive no joy from putting such strain on the economy, from requiring people to wear masks, from requesting folks from nonviolent crimes be released from jail,” Hidalgo said. “These have all been decisions that have been made with extreme seriousness and with much thought and consultation.

“Nobody wanted to put our economy in such a position, but it was within what we knew we needed to do,” she added. “But we can’t wait until things fall apart to fix them.”