A majority of the U.S. House has voted to impeach Trump for a second time, a week after he encouraged loyalists to “fight like hell” against election results. 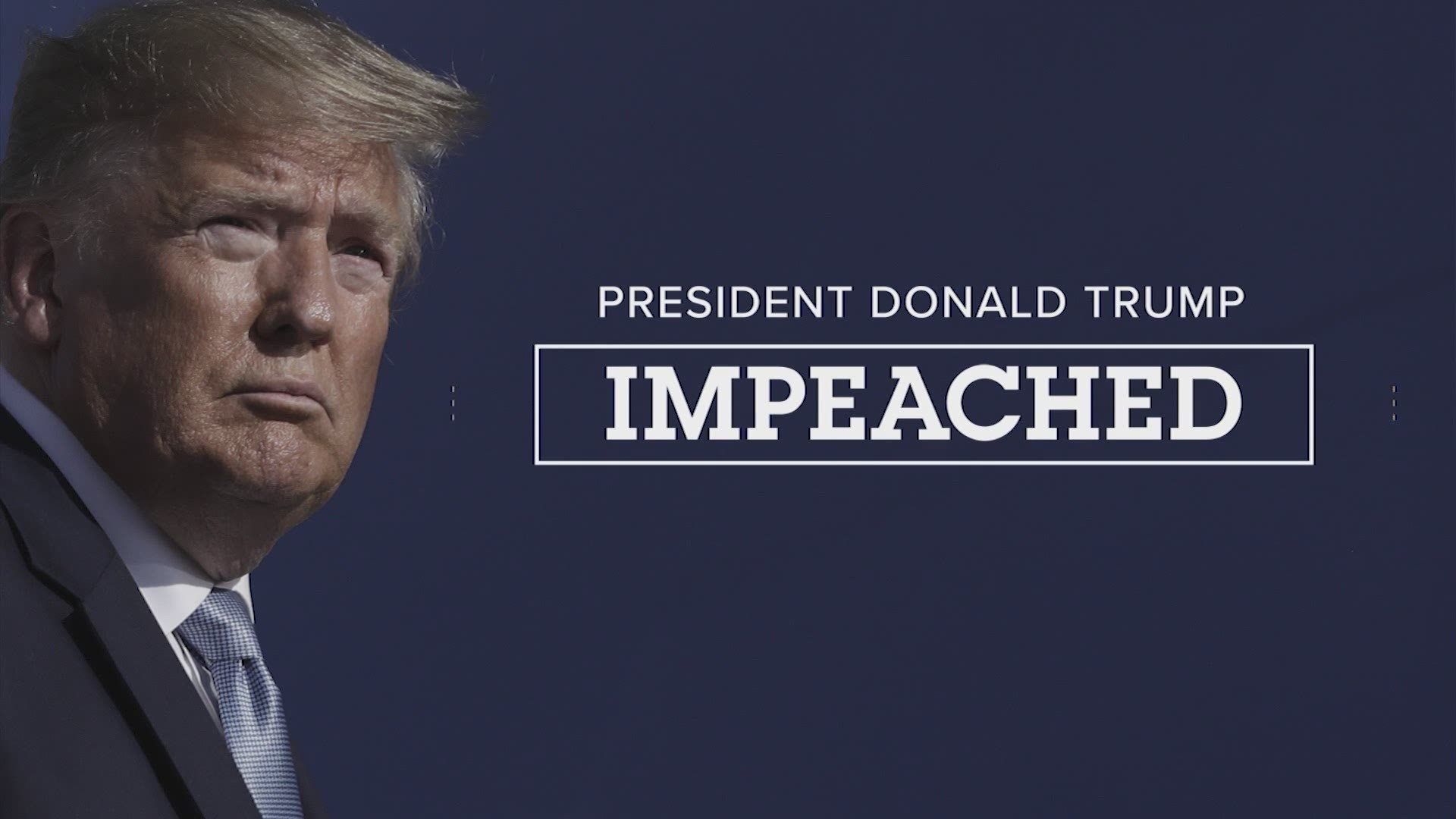 It's the second time Trump has been impeached during his presidency.

A total of 10 House Republicans voted for his impeachment, none of them from Texas. The final vote total was 232-197.

Here's a look at how the Houston-area Representatives voted:

Trump's actual removal seems unlikely before the Jan. 20 inauguration of President-elect Joe Biden. A spokesman for Senate Majority Leader Mitch McConnell said the Republican leader would not agree to bring the chamber back immediately, all but ensuring a Senate trial could not begin at least until Jan. 19.

During the debate before the vote, House Speaker Nancy Pelosi asked Republicans and Democrats to “search their souls."

Trump “must go,” Pelosi said. “He is a clear and present danger to the nation we all love.”

"I rise today in support of the article of impeachment and in opposition to the gaslighting that is masquerading as debate in this chamber today.

"By doing so, he incited an insurrection against our representative democracy itself.

"If that is not an impeachable offense, then what is?"

“As we look upon January 6, 2021 as a day in infamy, we must also work diligently to set a precedent that forbids such incitement and complicity from a sitting U.S. president as the rhetoric and actions of President Donald Trump which led to the Capitol insurrection,” said Congressman Al Green. “This second impeachment is the only way to send a resounding message to not only President Trump but to his supporters and anyone who considers seeking public trust, that such an abuse of power will never be tolerated in the United States of America.”

“The President prompted his loyalists to descend upon Capitol Hill in a December 19, 2020 tweet for something he ensured would be ‘wild.’ In his January 6 speech to his throng of supporters gathered at the National Mall, he ‘weaponized the hate that resulted in violence, the deaths of multiple people, an assault on democracy, and an insurrection against the Capitol of the United States of America.’ He incited a mob, infected with white supremacists, who carried a rebel flag, erected a gallows structure with a noose, and wore shirts with hateful messages, such as ‘Camp Auschwitz: Work Brings Freedom’ and ‘MAGA Civil War January 6, 2021.’ President Trump further emboldened their violent uprising by telling them, ‘to be strong’ and later referring to them as ‘great patriots who have been badly and unfairly treated for so long.’

“America can no longer tolerate a president who weaponizes hate and brings harm to our nation. This is why I voted for President Trump’s impeachment, removal, and disqualification to hold and enjoy any office of honor, trust or profit under the United States.”

"Those calling for impeachment or invoking the 25th Amendment in response to President Trump’s rhetoric this week are themselves engaging in intemperate and inflammatory language and calling for action that is equally irresponsible and could well incite further violence. They are placing a desire for vengeance above the best interests of the country. President-elect Joe Biden is right to reject calls to go down this dangerous path which will only further divide the country. We have great and important tasks to accomplish soon and we must focus on defeating Covid, rebuilding our economy and getting back to normal as quickly as possible. I am committed to working together with President-elect Biden to do just that."

"President Trump publicly pressured Vice President Mike Pence and members of Congress to accept the demonstrably unconstitutional idea that the Vice President has unilateral authority to ignore the sole slate of electors sent to Congress from each of the states of this Union and to declare who would be President of the United States. He did so leading up to, and during, a massively attended rally which he called for and encouraged.

"Moreover, the event was deliberately scheduled to take place at the precise moment at which members of Congress were meeting to carry out our Constitutional duty to count those very electoral votes. This pressure campaign whipped many of those present into a frenzy that contributed, in part, to the assault on the Capitol resulting in the deaths of several American citizens, including at least one Capitol Hill Police Officer.

"Therefore, we condemn the President for the words and actions which contributed to these events, and encourage every member of Congress to similarly condemn. While we do not venture to make legal judgement of the president’s intent regarding Wednesday’s demonstration, his actions were reckless. No President should ever, among other things, promote clearly unconstitutional theories that risk the stability of our nation and, in particular, do so to the detriment of the peaceful transition of power.

"Unfortunately, rather than conducting a sober review of the facts through hearings and establishing the legal standards under which we would review all that transpired, our Democrat colleagues are rushing impeachment articles through the House of Representatives. Meanwhile, some are beginning to target members of Congress with blanket threats of censure that are void of specific examples to justify a censure vote.

"Taking these paths undermine due process as established in the Constitution and inflames an already starkly divided nation by politicizing what should be a serious and thoughtful bipartisan review.

"The American people should have a voice in this process, just as they should with all processes in this house. After all, a key driver of our division today is a federal city that has too long ignored the people it supposedly works for. This is just another symptom of an oligarchic Congress that won't give us the requisite time to deliberate and hear from constituents. Here, the people's house should be giving the people a voice through a transparent and deliberative process.

"Voting to impeach the President seven days before his departure from office serves little purpose given the Senate will not be able to hold a trial by that time and risks establishing this impeachment as politically motivated. Furthermore, the articles are flawed, charging crimes that are lacking the requisite element of intent. For these reasons and others, we will not be voting for these articles of impeachment despite our strong belief the President’s actions were wrong.

"Above all, we condemn last week’s actions. But we also must denounce this rushed proposed reaction because we seek to stop the division inherent in our current politics. Now is not the time for political maneuvers that offer no remedy to the problems facing our Republic. A tree is known by its fruit, and this effort will bear nothing but further conflict and division.

"We must tone down the rhetoric and calm the tensions, something that impeachment will not achieve.

"Donald Trump is leaving the oval office next week no matter what. Let our legacy be that we rebuild our nation by moving forward together."

“Let me start by saying I strongly condemn the president’s rhetoric and his behavior. I understand, having witnessed these events first-hand, that emotions are high; but this decision must be based on facts and evidence.

“Let me also say, there very well may have been impeachable offenses committed leading up to, and on, that tragic day.

“But we have not been given the time to truly look at the facts and the evidence before this impeachment was hurried to the House floor. We haven’t been given the opportunity to hear from a single witness, or hold even one hearing.

“If Congress moves forward with removing a sitting president in this manner, it would set a bad precedent. I do not believe the Founding Fathers envisioned impeachment taking place in one day.

“If we did this in a deliberative way, perhaps we could come to a more bipartisan consensus. At the very least, I believe a deliberative process would give more Americans faith in the outcome.

“That’s why I’m calling on my colleagues and officials from the Justice Department to launch a full and thorough investigation. The American people deserve to know the full scope and severity of what took place.

“As a former federal prosecutor, I look at this as attempting to indict a case before it’s been presented to the grand jury. And I can tell you from first-hand experience, rushed justice is not the solution to mob violence.

“For that reason, I will, with a heavy heart, oppose impeachment at this time. I did not come to this decision lightly. And I truly fear there may be more facts that come to light in the future that will put me on the wrong side of this debate.

“It’s time for the nation to heal as we prepare for the peaceful transition of power.”