Because the two Republican Commissioners skipped the meeting, they were able to block a vote on a proposed tax rate increase. 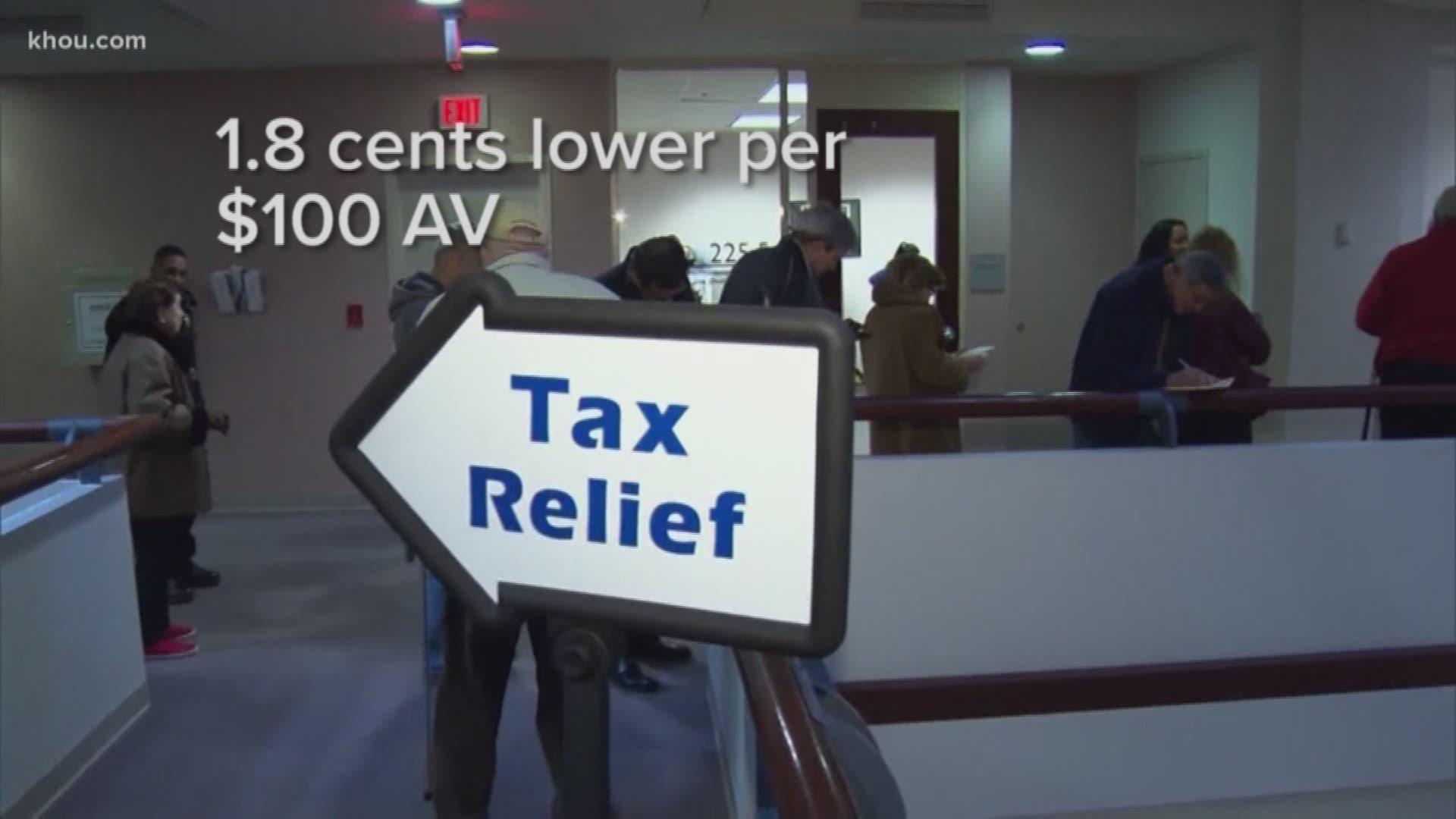 HOUSTON — On Tuesday, the two Republicans on the Harris County Commissioners Court skipped the court's meeting in order to block a vote on a proposed tax rate increase. The move not only denied the court a quorum but also lowered the property tax rate.

Texas law requires four out of the five commissioners to be present to vote on a tax rate increase.

The property tax rate must be set by Oct. 11. Because there was no vote Tuesday, Harris County will automatically revert to its effective rate, which is 1.8 cents lower than the current rate.

Harris County Commissioners were scheduled to vote on Tuesday to raise the county’s property tax rate for the first time since 1996. It would have boosted revenue by 8 percent, the maximum year-to-year increase allowed by law without voter approval. County Judge Lina Hidalgo said Tuesday the average homeowner’s tax bill would have gone up by about $38 per year.

However, starting in January 2020, annual city and county property tax revenue growth will be limited to 3.5 percent without a public vote under Senate Bill 2, which the Texas Legislature passed during the 2019 session.

A spokesman for Commissioner R. Jack Cagle said as a result of Tuesday's vote blockage, the average homeowner will save $77.55 per year on a $237,000 house with a standard 20 percent homestead exemption, or a total of $185 million countywide.

If property values continue rising, commissioners could be forced to cut the tax rate in the future to stay within the new cap.

During a Sept. 10 meeting, Hidalgo proposed putting the increased revenue from the one-time tax hike into a rainy day fund for services like health care and flood control.

Bill Jackson, Harris County's budget officer, said property tax revenue makes up between 70 to 75 percent of the budget. The rest of the money comes from fees, which are rarely raised.

Harris County does not collect sales tax outside of city limits, which Jackson said is where about 70 percent of new residents move to. About 1.8 million people live in unincorporated Harris County, compared to roughly 2.3 million in the city of Houston.

Travis County, which includes Austin, recently raised its property tax rate to the maximum allowed under law without requiring a public vote.

“The residents of Precinct 4 elected me to represent them. They did not elect me to lord over them or to repress them. This is the taxpayers’ money, not the government’s.

“Although proponents of this tax increase tried to couch it in terms of public safety and flood prevention, the truth is that only 5.5 percent of that revenue would have gone toward flood control. Most of it would have drained into the county’s general fund for members of the court majority to spend as they like. I believe we owe our constituents better transparency.”

"One of our most basic duties as public servants is to show up to work. Unfortunately, today Commissioners Cagle and Radack chose to hide rather than face the tough reality of the impact that extreme revenue caps will have on our County. Our residents don't expect all of us to agree on everything, but they do expect us to be grownups when making tough decisions.

"Now, because of their decision to play politics rather than to govern, we're left with the consequences. Consequences that will have potential catastrophic impacts on our ability to provide services our residents expect - the very same issues we all agree are priorities, like flood control, quality services for veterans, public safety, and infrastructure."

“It is disappointing but not surprising Commissioner Cagle and Radack failed to show up today. It is their responsibility to show up, represent their constituents and be part of the process even if they do not agree with it.

"For the past 20 years, certain members of the court have privately recognized the need to invest more into our county to deal with our growth, but have been unwilling to publicly address these issues.  We are here as result of their neglect on ensuring that Harris County remains a destination for businesses. Part of their job is to ensure Harris County is resilient and prepared for the future. Given the growing population and the major challenges we face, Harris County must be able to fund operations and maintenance to protect its growth and remain competitive with other counties. Other Texas counties have taken the same step and raised their tax rates, including Travis, Tarrant, and Lubbock.

"This proposal is a fiscally responsible measure against a revenue cap that will hinder us from being a world-class county and will impact our ability to govern for years to come as we are witnessing with the City of Houston. Our proposal was a modest and responsible investment that would allow us to continue to provide services and protect our community. This should have been a priority all along but was not. Far too often, it is easy to overlook the underserved, the underrepresented, and the uninsured, but we are all in it together. I think everyone deserves to be supported in whatever their challenges are.”