Firefighter layoff notifications will go out in April, while adjusted checks with back pay will be sent in May, according to the mayor's office. 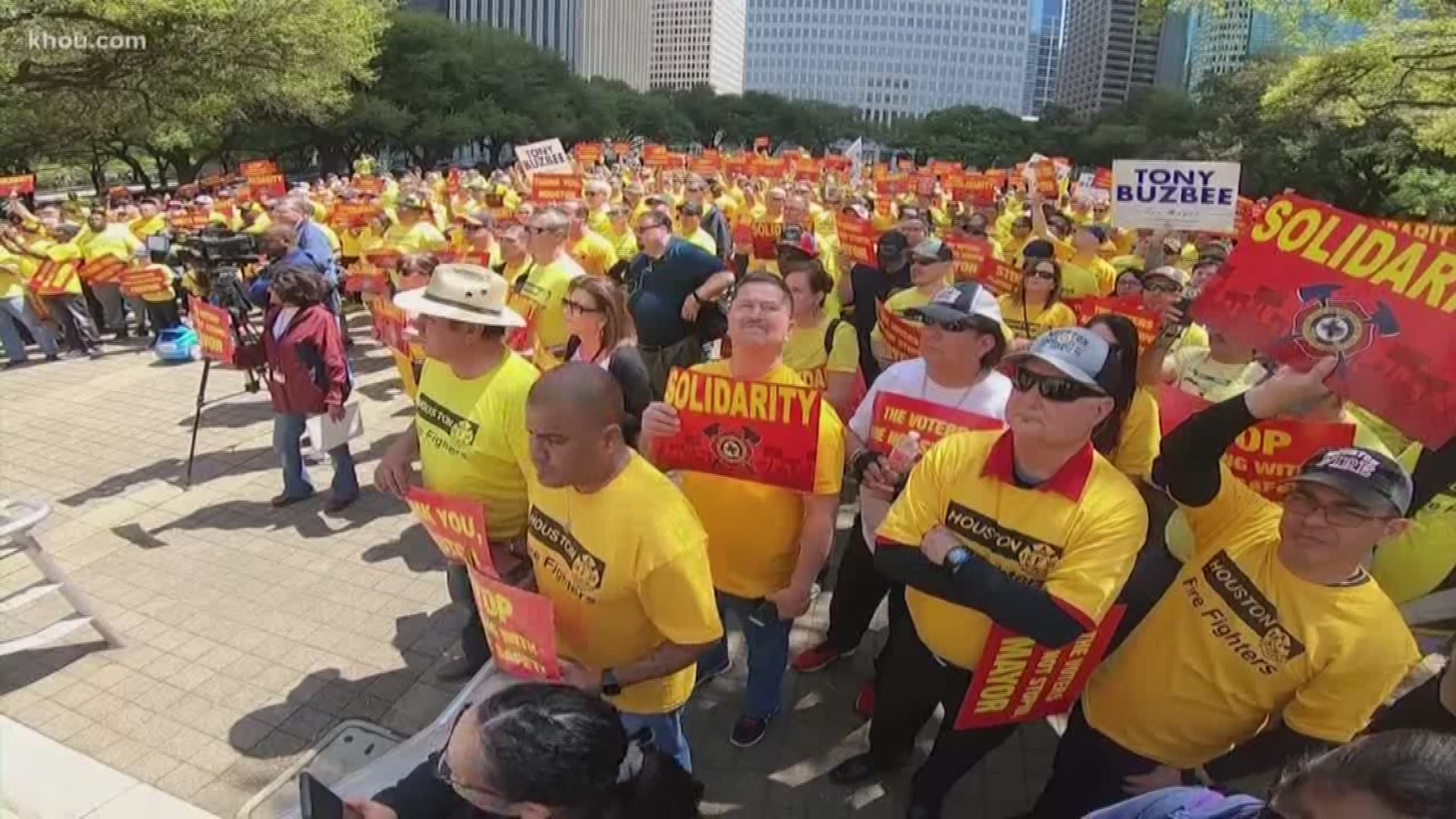 HOUSTON — A plan to create monthly garbage fees to pay for firefighter raises mandated by voter-approved Proposition B hit a roadblock Wednesday at City Hall, while the head of Houston’s fire union also pushed back against the mayor’s claim that a deal to phase in Proposition B over five years is on the table.

Council Member Dwight Boykins had planned to propose three amendments to create a monthly garbage fee of either $19, $24, or $27 to help pay for voter-mandated firefighter raises and avoid an estimated 400-500 layoffs of firefighters and city workers. However, other council members "tagged" that agenda item, delaying the vote for a week.

For the second straight meeting, Council Member Boykins had also tagged nearly every one of the week’s agenda items to protest 68 trained Houston fire cadets not being sworn in because of Prop B.

“I presented a solution, which was a garbage fee, as an option,” Council Member Boykins said after the meeting. “I was pleased to hear today that the mayor said he would place it on the agenda and allow the council members to vote.”

“Let me be very clear: I don’t support it, and I won’t vote for any one of those amendments,” Mayor Turner said. “I think they’re regressive, and I’m not going to vote to impose a (fee) on people in the city of Houston in this manner.”

Turner also told reporters an offer to firefighters to phase in a 29 percent pay raise over five years still stands.

“That is a proposal that I put forth. I continue to put that forth. It remains on the table," Turner said. "That would substantially eliminate the need to lay off anybody as a result of Proposition B, but they have rejected that proposal."

Following the council meeting, Marty Lancton, president of the Houston Professional Fire Fighters Association, Local 341, maintained that firefighters were the only ones to offer a proposal.

Lancton showed KHOU emails from their union’s attorney to the city attorney repeatedly asking for financial data on police incentive pay, which impacts how much firefighters in similar roles or with similar credentials will earn under Proposition B.

The emailed offer from the city attorney dated Feb. 19 that Lancton showed KHOU does not include those police incentive pay numbers.

“The reality is the mayor has not given us a proposal to implement Prop B,” Lancton said. “In fact, the mayor has specifically tried to break what 300,000 voters have clearly said.”

Lancton also said the union offered the city a three-year phase-in deal for Prop B on Feb. 22 that saves $120 million and covers insurance. However, he said city officials walked away.

Another document provided by a city source showed police incentive pay budgeted at around $71 million in Fiscal Year 2019. The same figure for the fire department, Lancton said, is around $6 million.

Turner’s staff said Monday that layoff notifications will go out in April, while adjusted checks with back pay will be sent in May.

Mayor Turner to implement Prop B for Houston firefighters, warns of layoffs